How a Norwegian-American immigrant is helping calm Israelis’ nerves 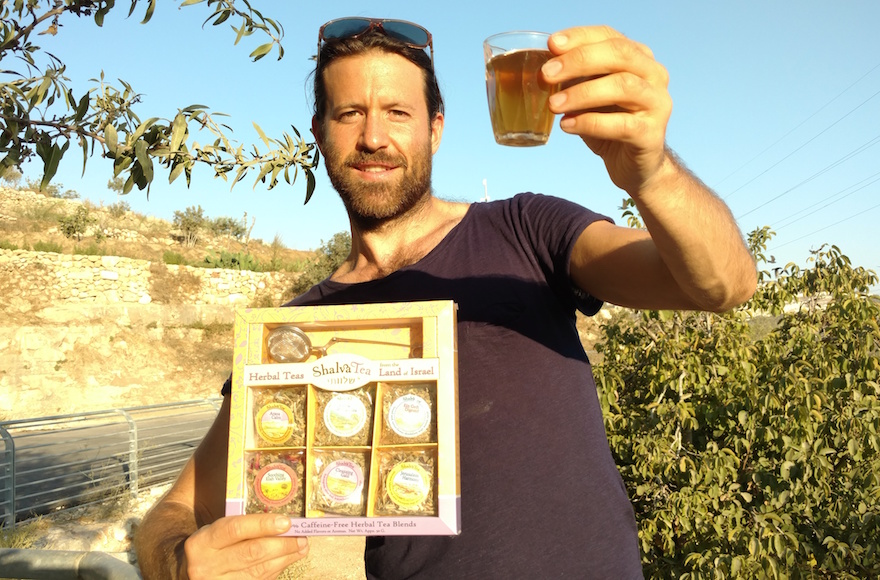 After moving from Maryland to Israel three years ago, David Ross launched his locally sourced herbal tea made up of dried herbs indigenous to the Holy Land. (Courtesy of Ross)
Advertisement

JERUSALEM — Like many Israelis, David Ross starts his morning with a strong cup of Turkish coffee with cardamom.

But then the rest of his day is all about tea — specifically the locally sourced herbal tea company he started after immigrating to Israel from the United States three years ago.

Though his company, ShalvaTea, is technically a startup, Ross isn’t your typical Israeli entrepreneur. He’s originally Norwegian, once spent two years living in a yurt and practices outdoor survivalism for fun. He’s also a Yale graduate.

His life changed as soon as he moved to Jerusalem in the summer of 2014. The day he arrived, Ross, then 32, met the woman who has been his girlfriend ever since, enrolled in a six-month Hebrew course and set right to launching his business — sourcing ingredients, printing packaging and securing permits.

Each of the six tea blends Ross uses represents a different ecological region of Israel, and the tea contains dried herbs indigenous to the Israeli landscape. Because he uses only local suppliers, from herb growers to packaging printers, his tea carries official Made in Israel certification. Ross also employs people with disabilities to package some of the product.

“Selling herbs grown here is a way to give a pure taste of Israel,” Ross said. “I started my herbal tea company at a stressful time, following a war with Gaza. It was my way of trying to calm things down a bit.”

Ross came up with the idea of making Zionist-inspired herbal tea during two extended visits to Israel to research the aftermath of the devastating 2010 Carmel Forest wildfire. The blaze destroyed over 12,000 acres and was Israel’s deadliest fire on record, responsible for 44 deaths.

On his first trip, in the summer of 2011 while pursuing a master’s degree in forestry at Yale, Ross measured the density of Carmel areas that did not burn as a means of gauging the forest’s overall health. He wrote a report recommending thinning the forest and letting the land naturally regenerate. A year later he returned to Israel on a Fulbright Scholarship to research market-based solutions to overforestation in the Carmel region.

“I looked into creating biogas from wood and promoting building with wood, but those are real challenges in Israel,” he said. 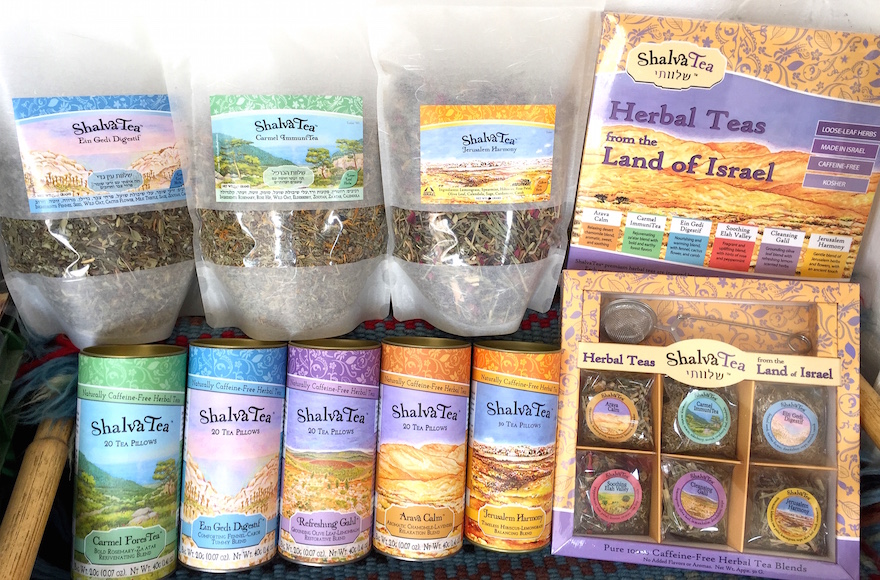 Each ShalvaTea blend is associated with the ecology of a different area of Israel. (Courtesy of David Ross)

What Ross did discover during his time in northern Israel was many of the indigenous plants that would inspire him to create his herbal tea company.

The son of a Norwegian father and a Jewish-American mother, Ross always has been interested in nature. He was born in Oslo and moved to Helsinki, Finland, as an infant, and as is typical in Scandinavia spent plenty of time outdoors. The family moved to Bethesda, Maryland, when he was 6.

“I was always a very outdoorsy person. I got that from my Dad. He would always take my brother, sister and me out into nature. It was just the Norwegian way,” Ross said.

He lived in a yurt for two years in Santa Barbara, California, while working for the American Red Cross, where he helped communities do natural disaster preparedness and cope with recovery. More recently, Ross completed a yearlong survival and wilderness skills course in Israel. For the culminating exercise, participants had to survive in the wild for three days with nothing but the clothes on their backs.

He decided to make the move to Israel from New Haven, Connecticut, after feeling a real calling and connection to Israel while spending a year in the Jewish state, including six months on an ecological kibbutz in the southern Negev Desert.

By all accounts, Ross has had a very successful aliyah — Hebrew for immigration to Israel. On the day he made aliyah through Nefesh B’Nefesh, he met his girlfriend, Sarke Alon, after wandering by chance into the café she owned in Jerusalem’s largest open-air market, the souk at Mahane Yehuda. He was in search of somewhere to watch the World Cup on TV, and she greeted him warmly.

“She welcomed me to Israel and offered me a free beer,” Ross said with a smile.

After settling in, Ross took a free online marketing course offered by Nefesh B’Nefesh, the agency that facilitates and encourages immigration to Israel from North America, which in turn helped him secure a business loan from the Ministry of Immigrant Absorption.

An amateur herbalist who learned about plants during his academic training, Ross experimented for his tea with an array of Israeli herbs and plants. Some ultimately did not make it into his blends, like pomegranate shells and pine needles.

“The pomegranate shells just didn’t taste good, and the Health Ministry didn’t allow the use of pine needles,” he said.

Each blend is meant to reflect the distinct flavor of a geographical region in Israel. For instance, in his Arava Calm, Ross only uses plants that grow in the Arava Desert of southern Israel. The teas are all caffeine free and kosher certified, and now can be bought overseas online at ShalvaTea’s website.

On a recent afternoon, Ross stops by Shekel, the community services center in Jerusalem where individuals with disabilities are packaging some of his tea products. Ross was inspired to partner with Shekel by a cousin who has Down syndrome and works in a similar facility. (Most of ShalvaTea’s products are produced at a small factory in northern Israel.)

Ross takes his tea very seriously. He’s adamant that his blends be produced exclusively with local ingredients – meaning, for example, no ginger or cinnamon. But his girlfriend has convinced him to bend the rules a little and include cardamom in his Jerusalem Harmony blend.

“Cardamom isn’t indigenous to the Jerusalem hills, but it’s been traded in the Holy City for centuries, so I agreed to give it a pass,” Ross said.