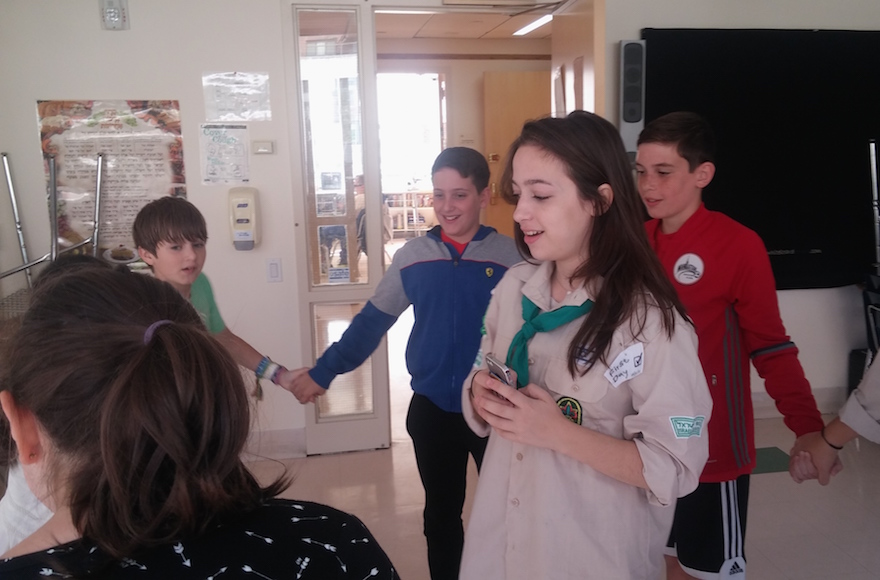 Arielle Geismar, in the girl scout uniform, leading a group of American Jewish kids in one of the first meetings of the Manhattan chapter of Tzofim Atid, the Israeli Scouts' English-language branch. (Ben Sales)
Advertisement

NEW YORK (JTA) — The 16-year-old counselor stands in a tan uniform shirt, untucked, with green jeans, a green kerchief tied around her neck and epaulets on her shoulders. Two patches are embroidered on her chest. And she’s surrounded by a circle of 11-year-olds.

Her task on this Sunday morning in uptown Manhattan is to list five sneaker brands before one of the children can run around the entire circle — a slightly more complex version of “Duck, Duck, Goose.” She fails, and the next round falls to one of the kids who wants to one-up her. He promises to name five types of knots before a friend completes a lap around the circle.

“Types of knots?” the counselor, Arielle Geismar, shouts as “Golden Boy,” a 2015 Israeli hit sung entirely in English, plays. “I don’t know types of knots. And I’m a Scout!”

Welcome to the American version of Israel’s most popular youth group, the Israeli Scouts.

“Golden Boy” is an appropriate choice for this youth group, which wants to impart an Israel-centric secular Judaism to American Jewish kids, all in English. In Israel, the group teaches teamwork and leadership, along with Boy Scout-style survival skills. Except for the language, the new American group aims to mimic that curriculum. But in the concrete jungle of New York City, the focus appears to be more on teamwork and Israeli history and culture, less on knots and building a fire.

“It’s this bigger idea of connectedness in a time of displacement,” said Geismar, who was introduced to the Scouts at a summer camp run by Young Judaea, an American Zionist group. “Growing up in America and watching the current election and everything going on with Israel and Palestine and problems in the Middle East, I felt like a young child: There wasn’t anything I could really do. After I joined the Scouts, I felt there is something I can do.”

In Israel, the Scouts (Tzofim in Hebrew) are the country’s largest youth movement, with 85,000 members from fourth to 10th grade. Youth groups play a prominent role in the lives of Israeli children, with chapters run by teens aged 15 to 18 meeting twice a week with little to no adult supervision. Unlike other large Israeli youth groups, the Scouts have no political affiliation and have chapters for religious and secular kids.

There’s already a Hebrew-speaking branch of the Scouts in the U.S. for children of Israeli expatriates who are being raised in the language — supported, like the English version, by the Israeli American Council.  That program has 3,500 participants across 24 chapters in cities nationwide.

The English program, which began this school year, has chapters in Manhattan and on suburban Long Island serving children 9 to 15, with about 60 participants.

“People are looking for their kids to participate in something Jewish, but it has to be secular in order to attract the unaffiliated,” said Iryna Gubenko, strategic partnerships manager at the Areivim Philanthropic Group, which is funding the new initiative. “We see Israel as part of the identity of those [people].” 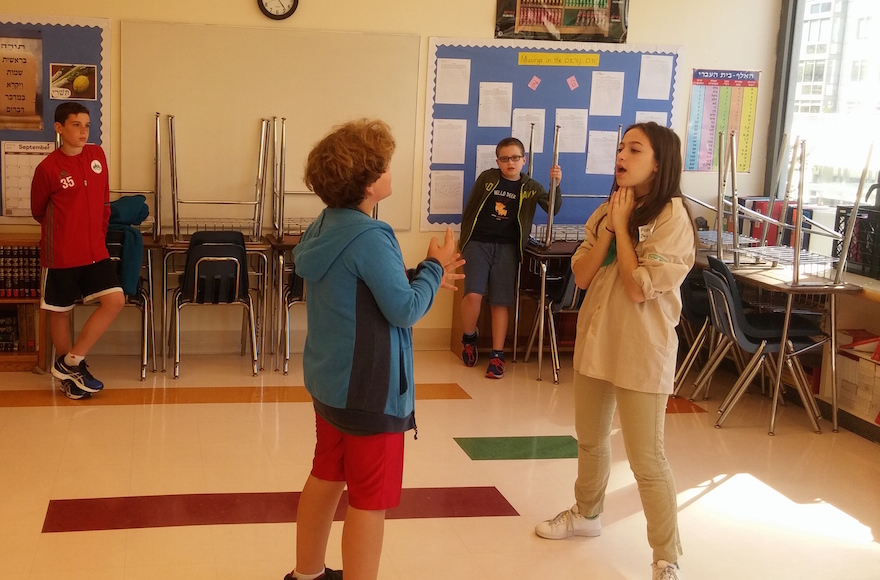 The program has four components — life skills, Israeli culture, social responsibility and scouting. Activities range from learning about Israeli history to making an Israeli flag to, yes, tying a knot or building a tent — though the kids will also play lighthearted games. There will be occasional joint activities with the Hebrew-speaking groups.

One of the biggest differences between the Israeli and American Scouts, says Mika Kaminsky, the English program’s director, is that when they graduate, the Israelis will enlist in the army, whereas the Americans will attend college. So while the Israeli kids might focus on physical challenges, the Americans may derive more value from exercises like team building and leadership training. (At the recent Manhattan session, which took place at the Solomon Schechter School, the scouts held hands in a circle and tried to maneuver a hula hoop around the circle without letting go.)

“It was skills we needed for activities, and it helped us during our army service,” Kaminsky said of her own experience in the Israeli Scouts as a child. “If you translate it to the American way of life and college, you’ll be better in college if you know how to manage your time, speak in front of people.”

For Israeli parents in the United States, sending their children to the Hebrew-speaking group offers a structured way to keep up a connection to the old country. It also gives secular Israeli parents a way to see their expatriate peers without having to join a synagogue.

“We need to create these cultural hubs for Israelis because they usually will not go to the synagogue,” said Eytan Behiri, the adult supervisor of the Hebrew chapter on Long Island, whose children are members. “As much as we don’t like to say it, we are immigrants in this country. A lot of immigrants want to bring their culture and pass it on to their kids.”

Anglophone American parents said they also appreciated the connection to Israel, where some have extended family. Regina Kachkoff-Enk enrolled her 9-year-old daughter in the program because she liked the emphasis on Judaism without too much religion, unlike some other youth groups. And she chose the Israeli Scouts over the Girl Scouts because she saw it as more gender-egalitarian.

Geismar, the counselor, who is still in high school herself, says the supportive atmosphere of the group is especially valuable for preteens who are “undergoing some of the most transformative years of their lives.” And she appreciates the independence and informality that Israeli culture promotes.

“The willingness and easygoingness of Israelis is different than Americans,” she said. “Things don’t have to be set to a schedule. Things can be fun. In America you get so set in your routine. To be out of that is so liberating.”