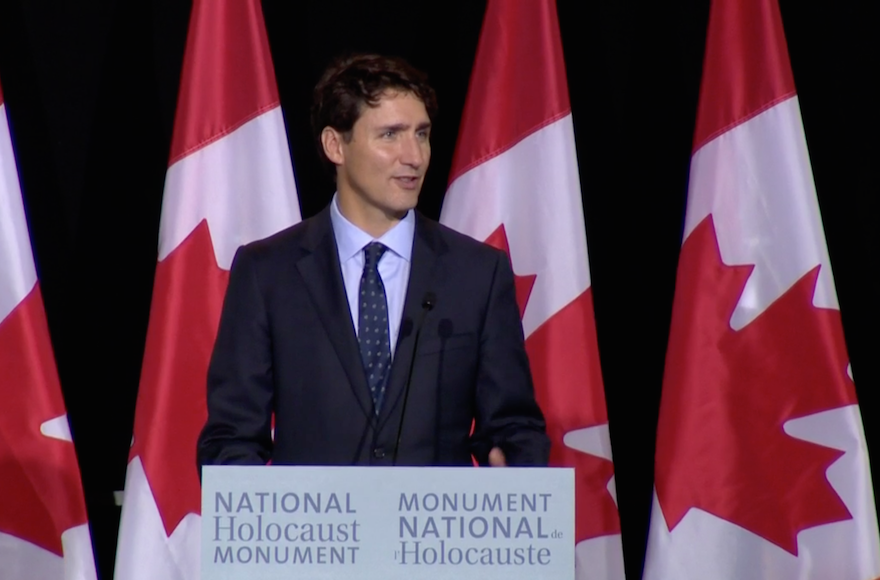 (JTA) — The plaque marking the opening of Canada’s National Holocaust Monument will be replaced after the original failed to mention that Jews were the majority of the victims.

Heritage Minister Melanie Joly told the House of Commons on Thursday that the plaque will be replaced, and also reiterated that the monument commemorates the 6 million Jews and 5 million others killed by the Nazis and their supporters during the Holocaust.

“On the day the monument was unveiled, we noticed that the panel at the entrance conspicuously and curiously did not mention Jews,” Martin Sampson, director of communications for the Centre for Israel and Jewish Affairs, said in a statement, according to the Toronto Star. “We raised our concerns with the government. They were very responsive, acknowledged the error and agreed to correct it immediately.”

Prime Minister Justin Trudeau unveiled the monument at the end of last month. It states that the monument commemorates the “millions of men, women and children murdered during the Holocaust and honours the survivors who persevered and were able to make their way to Canada after one of the darkest chapters in history.”

“Today we reaffirm our unshakeable commitment to fight anti-Semitism, racism, xenophobia and discrimination in all its forms, and we pay tribute to those who experienced the worst of humanity,” Trudeau said at the opening of the monument. “We can honor them by fighting hatred with love, and seeking always to see ourselves in each other.”

Canada had been the only Allied power that fought in World War II not to have a national Holocaust memorial.

The memorial took a decade to build. Its more than $7 million cost is being split between the government and private donors.