Meet the Orthodox firearms instructor who wants Jews to own guns 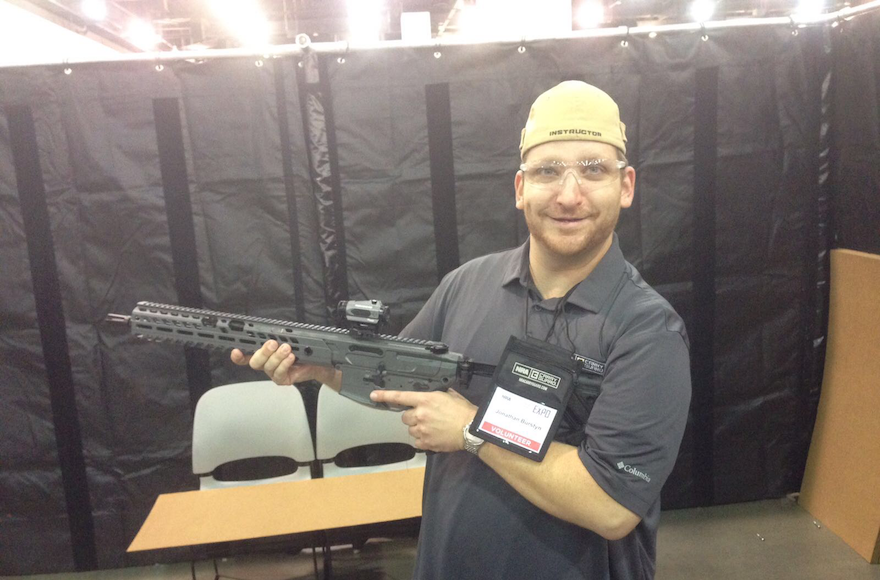 Jonathan Burstyn, a Jewish gun instructor, at an NRA convention in August (Courtesy of Burstyn)
Advertisement

CHICAGO (JTA) — Three days after a gunman killed 58 people in Las Vegas, a post in a Facebook group for Chicago Jews displayed a blurry photo of survivors fleeing the bullets. Next to it was a flier advertising ChiDefense Firearm Training with a Hebrew phrase underneath denoting that the company is closed for Shabbat.

The post got a few “likes” — and plenty of hate. One commenter called it “vile and distasteful.” Another wrote sarcastically that it displayed “impeccable logic.” Another called for it to be taken down. It appears to have since been deleted.

But on the day the post appeared, the man behind the ad stood by it.

Jonathan Burstyn, an Orthodox gun safety instructor, apologized for any offense he caused but said that more than ever, Jews need to get armed.

“How many threats have there been on JCCs?” said Burstyn, 27, referring to the waves of bomb threats against Jewish community centers and day schools this year. “Is there ever an attack at an NRA convention or at a police station or at a gun store? No, because everyone’s heavily armed at these places.”

Burstyn, who goes by “Yoni,” grew up in this city’s Orthodox Jewish community and now trains members there to own, carry and fire guns. He became a certified firearms safety instructor in January and has since tutored 50 people — most of them Jewish men — to carry concealed weapons. His trainees, he says, include a former Israeli soldier and an ex-KGB officer.

Burstyn’s love of guns is unshaken by the shooting in Las Vegas, where the shooter stockpiled 23 firearms, as well as any of the other many mass shootings in the United States. He is fluent in National Rifle Association talking points — from the “good guy with a gun” theory to a focus on Chicago, where strict weapons control has failed to stem a high homicide rate.

His gun advocacy also comes with a Jewish twist: Burstyn says the Second Amendment should be just as sacrosanct to Americans as Jewish law is to Orthodox Jews. In Burstyn’s reading, the Constitution is the American Torah and NRA President Wayne LaPierre is defender of the faith.

“The Torah is a timeless message,” Burstyn said. “Our founders who started this country knew better and entrusted us with this, just like Hashem entrusted us with the Torah — not to compare the two. Just like Orthodox Jews, we don’t reform the Torah. Wayne LaPierre is expressing faith in the Constitution.”

The son of a volunteer policeman, Burstyn grew up around guns and shot his first rifle at age 6 — “a very invigorating experience,” he recalls. He lost interest in shooting until Illinois allowed concealed firearm carry in 2013. Burstyn obtained his license and began offering classes on Sundays. During the week he works at a nursing home, and on Saturdays he provides security for his synagogue.

Last week, standing at a shooting range in a baseball cap, protective glasses and earplugs, Burstyn fired his favorite everyday handgun — the Smith and Wesson M&P Shield — into the silhouette of a human body. His shots all landed within the target on the silhouette’s chest. The sound of bullets popped from the booths next door.

Burstyn believes gun ownership should come with rigorous training and safety. He says only well-balanced people should own guns, and his training course lasts 16 hours. It covers everything from how to breathe while shooting — inhale, shoot, exhale — to the laws concerning concealed carry and how to travel with a gun.

While most American Jews lean left, Burstyn is not alone among Jewish gun advocates. There’s a group for them called Jews For The Preservation of Firearms Ownership. The Golani Rifle & Pistol Club serves observant Jews in the New York-New Jersey area. And Richard Feldman, a former NRA lobbyist, is now the head of the Independent Firearm Owners Association, which supports gun rights.

“I think it’s only incumbent on the Jewish people who believe in the slogan ‘Never again,’” Feldman told JTA regarding gun ownership. “Just because it hasn’t happened here doesn’t mean it couldn’t happen here. I’m not saying it’s going to happen soon, but once you give up your right to protect yourself, you don’t get it back very easily.”

The idea that guns could have mitigated the Holocaust has been disputed by scholars and Jewish groups including the Anti-Defamation League. Rabbi Menachem Creditor, founder of Rabbis Against Gun Violence, noted data showing that having a gun at home increases the risk of injury.

Burstyn’s gun advocacy does have limits. He supports, for example, a ban on automatic weapons. But while he knows a gun owner probably couldn’t have stopped the Las Vegas shooting, the tragedy only strengthened his resolve to remain armed.

“Shabbat, Yom Kippur, I always carry,” he said. “Of course you want to carry a gun all the time.”