To save Yiddish theater, these Romanian actors abandoned their home 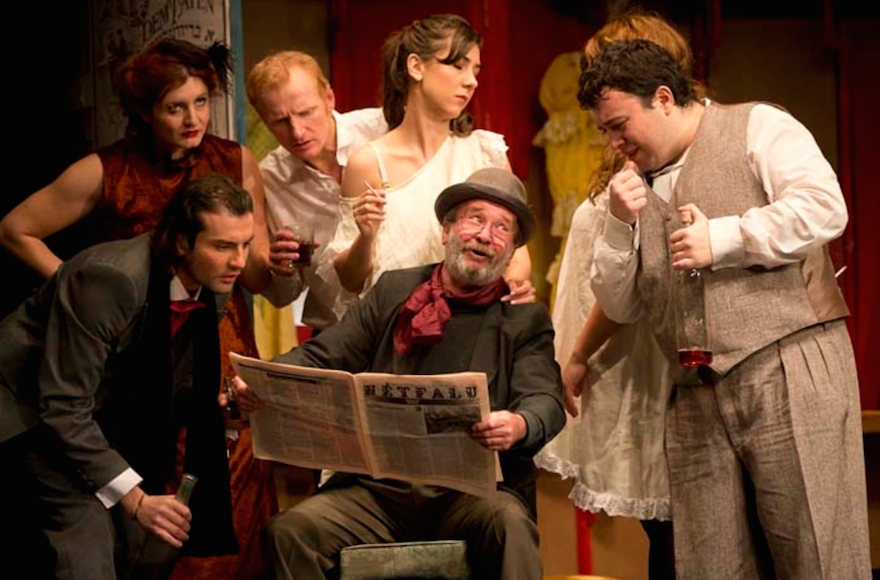 BUCHAREST, Romania (JTA) — When the roof of the Jewish State Theater collapsed during a 2014 snowstorm, its director reluctantly knew it was finally time to abandon the century-old building in this capital city.

Maia Morgenstern did not take the decision lightly.

Following years of neglect by authorities, the Bucharest Jewish community had fought for decades to keep the storied theater afloat. The Jewish State Theater had been a major cultural institution for Central European Jews prior to the Holocaust. Later, during communism, it was the Romanian Jewish community’s only independent institution.

“It was obvious we couldn’t stay,” Morgenstern, a well-known actress in Romania and the theater’s director since 2012, recalled last month during an interview.

So they didn’t. Morgenstern — who is best known internationally for playing Mary, the mother of Jesus, in Mel Gibson’s “The Passion of the Christ” —  and the theater’s 20-some employees packed up the surviving sets, costumes and gear.

But the story of Bucharest’s Jewish State Theater didn’t end there. Instead, the Yiddish troupe’s members leveraged their forced exile to raise awareness of the need to preserve the four-story building.

How did they accomplish this?

“We just took the costumes and relocated across the street,” Morgenstern said, gesturing toward an empty lot.

For weeks on end in early 2014, the performers put on free shows once or twice a day out in the open, in the freezing cold. 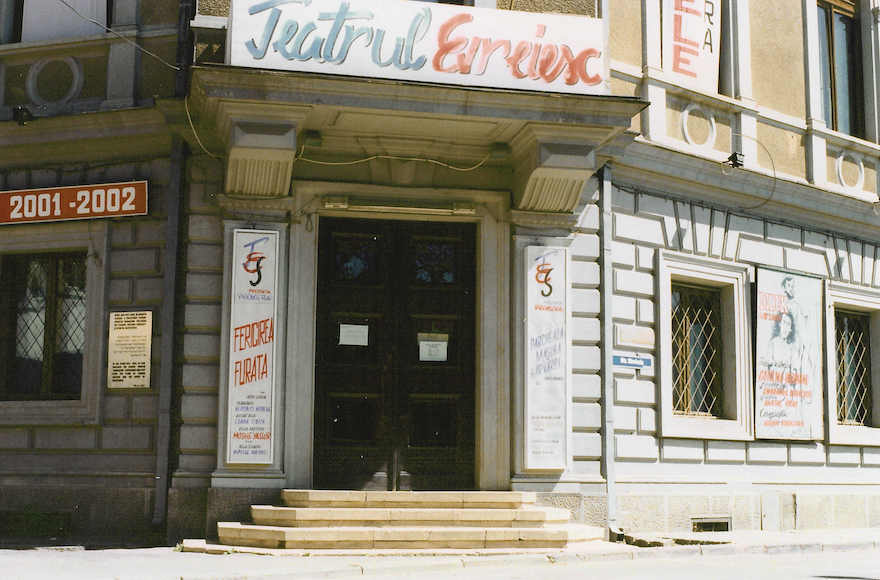 The actors’ devotion and talent did not go unnoticed. Despite bone-chilling cold, the shows attracted media and spectators. That, in turn, drew attention to the theater’s uncertain future, despite vague assurances from city officials that it would reopen at some point.

The increased exposure, Morgenstern said, put pressure on officials to solve the problem of the dilapidated theater, which was founded in the eastern Romanian city of Iasi and moved into the Bucharest building in 1941.

For example, the decision to perform outside the ruined theater did not sit well with the mayor’s office, Morgenstern said.

“They asked twice if we don’t mind to stop performing,” she recalled.

But Morgenstern, 55, persisted, citing her employees’ salaries, which are paid by the state. (Morgenstern earns about $13,000 annually, a figure she revealed earlier this year to protest low wages in Romania’s cultural sector.)

“So if we get paid, we need to perform,” she said. “And if the state doesn’t give us a theater, we’ll perform in this field.

“It wasn’t like we were protesting or anything,” she added with a smile.

Immediately following the collapse, city officials told the media that the building would be repaired. Behind the scenes, however, a blame game was being played: Local officials and a contractor entrusted with preserving the building argued over each other’s responsibility and that of the theater. 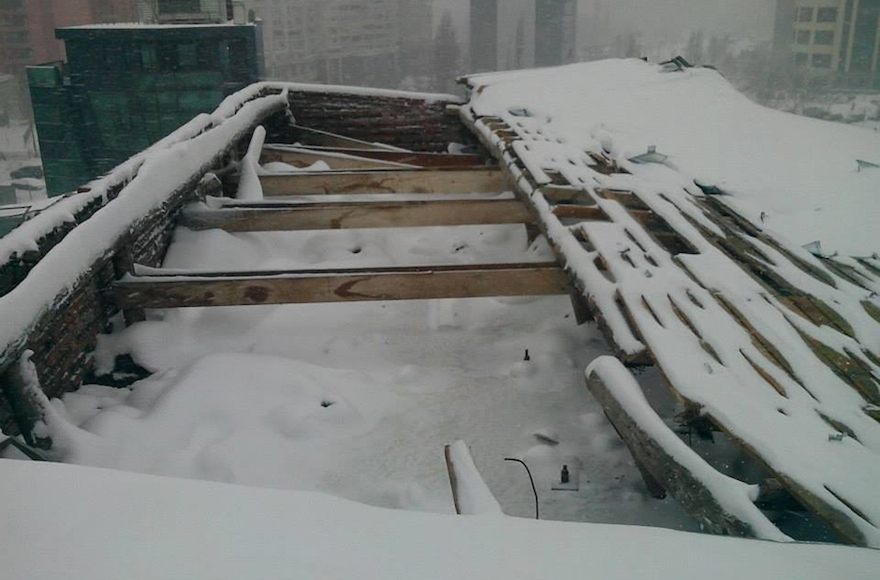 The sum required for restoring the theater, which was last renovated in 1956, was staggering at nearly $3 million.  It made a huge dent in the municipal budget, which is so overstretched that even celebrations of Romania’s national day are canceled occasionally for lack of funds.

As city officials debated the problem, Morgenstern’s team leveraged her celebrity status and the media’s interest in the colorful spectacle outside the building to pressure City Hall.

“This show is meant to be a warning to public opinion, but also for the authorities,” said a statement announcing the open-air production in February 2014 of “Mazl Tov … And Justice For All!” — a musical comedy about the role of humor in Jewish tradition featuring Yiddish and Romanian songs. “Do not let a theater with a unique tradition and identity disappear from Europe’s cultural landscape because of carelessness.”

City officials said they had worked tirelessly from the get-go to resolve the issue. While that may be true, Marcel Draghici, the theater’s longtime executive producer, believes the outdoor performances “are part of the reason we reopened last year,” he told JTA.

Putting on a major production in an empty and frozen field was certainly a challenge, added Draghici, who like most of the theater’s employees is not Jewish.

“But, in a way,” he said, “it felt like we were connecting to the old history of Jewish theater, which was often performed outside in shtetls, without theater houses.”

The theater performs mostly in Yiddish now before a predominantly non-Jewish crowd. And while the actors take special language courses, they don’t always understand the exact meaning of the words they recite on stage, several of them said.

Though speaking in Yiddish can lead to thespian complications, the language barrier was a boon during the communist dictatorship of Nicolae Ceausescu, who ruled Romania with an iron fist until his overthrow and execution in 1989.

“Because we were talking Yiddish on stage, we could say things that weren’t allowed to be said in Romania,” Rudi Rosenfeld, 75, a Jewish actor who has been involved in the theater since the late 1940s, told The New York Times earlier this year. “The audience had headphones on and our colleagues were translating into Romanian, but they would skip the sensitive parts.” 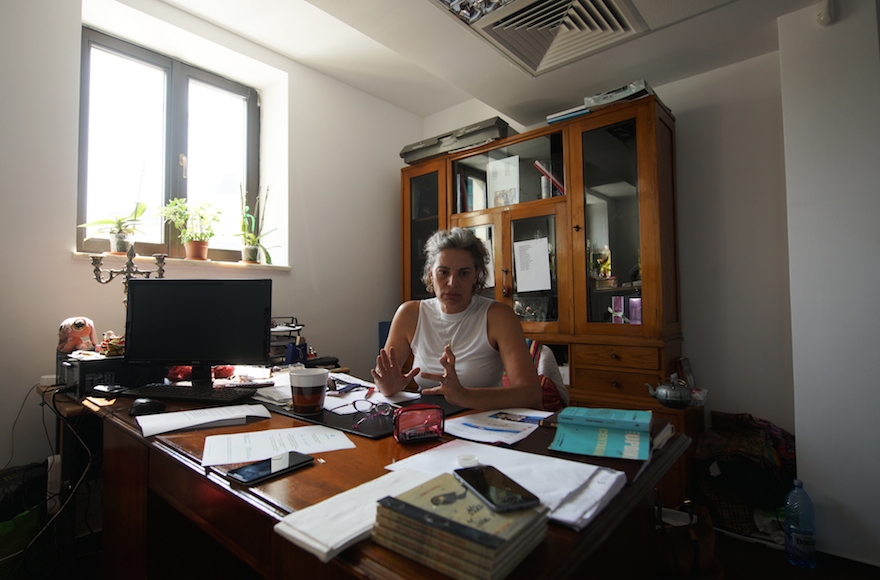 Morgenstern was among several dozen Jews who gathered at the theater and stayed there during the chaotic days of the bloody revolt against Ceausescu in which security police killed dozens of protesters.

“It was my second home,” she said. “We went there because it offered us a sense of safety.”

The only time that Yiddish was not permitted at the theater was during World War II, when the pro-Nazi regime of Ion Antonescu allowed the institution to remain open, even as preparations were made for the murder of half of Romania’s Jewish population of 800,000.

Today, with Romania’s post-Holocaust Jewish population at about 10,000, non-Jews account for the majority of the thousands of people who come to the Jewish State Theater to see its productions — a varied repertoire ranging from classics by Avrom Goldfadn and Sholem Aleichem to irreverent satires by the Israeli cinematographer Hillel Mittelpunkt.

And though they don’t speak a word of Yiddish, some of the regulars prefer performances in that language.

“I follow the subtitles in Romanian,” said Elena Albu, a 23-year-old university student who comes to the theater at least twice a year. “But I prefer to go to the Yiddish productions because it’s like reconnecting to the rich culture this city and country lost.”