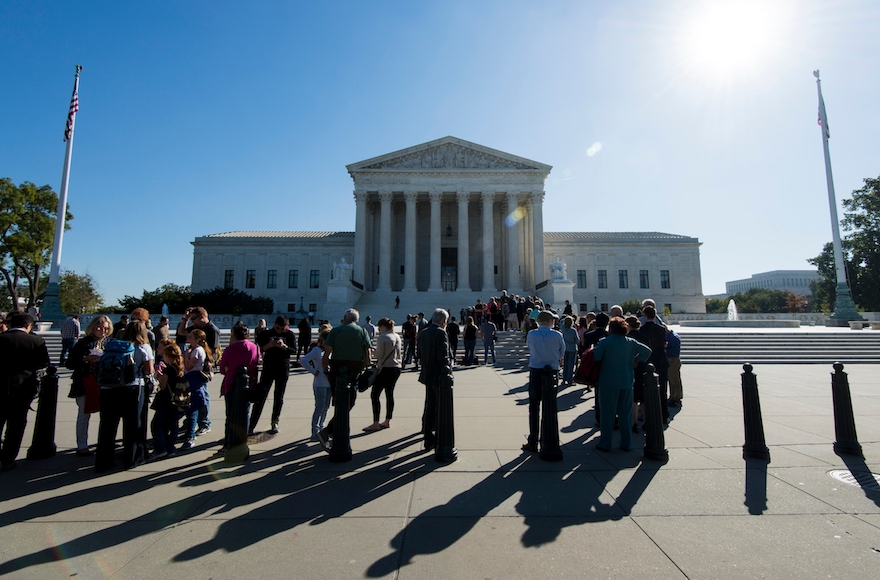 WASHINGTON (JTA) — The Supreme Court is back in session with a full bench of nine justices, so expect more momentous decisions after nearly a year of caution.

Now that the high court is back to its previous equilibrium — four solid liberals, four solid conservatives and one wavering conservative — expect all eyes to be focused on the waverer, Anthony Kennedy.

And after a relatively quiet season, owing to the absence of a ninth justice following the death in February 2016 of Antonin Scalia, a conservative icon, Jewish groups are on alert as well. The new judge, Neil Gorsuch, appears to be comfortably slipping into Scalia’s slot.

“So far, the Federalist Society would approve,” said Marc Stern, the general counsel for the American Jewish Committee, referring to Gorsuch, who joined the court in April as its previous season, and the leading conservative legal group.

“The judges now have known tendencies, it’s much more institutionalized,” he said.

The return to a conservative majority, with Kennedy an occasional swing vote, worries liberal Jewish groups and heartens right-leaning ones, mostly Orthodox — especially in the case of a baker who refused to sell a wedding cake to a gay couple. Civil liberties groups are also closely watching a case of what they see as gerrymandering by the Republican-led State Legislature in Wisconsin.

Here’s a look at some of the cases and where Jewish groups are.

Jack Phillips, a Colorado baker, refused to bake a wedding cake for Charlie Craig and David Mullins in 2012, saying that to do so would violate his religious beliefs. The couple took him to the state’s Civil Rights Commission, which ruled that he could not turn away gay couples. A state court upheld the ruling; now it’s at the Supreme Court. Last month, a prominent ally joined Phillips: the Trump administration.

Jewish groups are filing friend-of-the-court briefs on both sides of the case, with an array of Orthodox groups siding with Phillips. The Anti-Defamation League and the Reform movement are siding with the couple.

ADL has already been involved with the case at the state level. In a statement to JTA, the group said it urged the court to “reject arguments that religious or moral disapproval is a legitimate basis for discrimination against minority groups.”

The National Jewish Commission on Law and Public Affairs, a group helmed by the father-daughter legal team of Nathan and Alyza Lewin that often represents Orthodox groups, is backing the baker. It cites in its amicus brief Talmudic prohibitions on assisting others in carrying out “avodah zarah,” or prohibited acts.

“The personal duty to avoid meaningful participation in another person’s religiously prohibited behavior is, under Jewish Law, a primary obligation and not merely a form of secondary observance,” the brief says.

Agudath Israel of America, which signed on to the Lewins’ brief, filed its own separate friend-of-the-court briefs in a reflection of the importance of the case for the Orthodox.

“For a religious minority community, the Masterpiece case is a big case,” said Nathan Diament, Washington director for the Orthodox Union, which joined another brief. “There’s a way to balance religious liberty and LGBT rights that doesn’t have to end in culture wars.”

Oral arguments, the equivalent of tea leaves for Supreme Court watchers, have yet to take place, so it may be too early to speculate on how the court will split. One possible clue: Kennedy wrote the decision in 2015 that codified gay marriage as legal.

Supreme Court Justice Ruth Bader Ginsburg says this case, involving redistricting, is among the most important facing the court this session, and an array of Jewish civil liberties group that signed on to an amicus brief agree.

The case addresses redistricting by the Wisconsin State Legislature in 2011 that created a situation in which, the ADL said in a statement to JTA, “Republicans would be able to maintain a 54-seat majority (of the 99 Assembly seats) while only garnering 48 percent of the statewide vote, while Democrats would have to get 54 percent of the vote to capture a majority of the seats.”

That poses a threat to American democracy, according to a brief filed on behalf of a number of civil liberties groups, three of them Jewish: the ADL, the American Jewish Committee and the National Council of Jewish Women.

Stern of the AJC said a far-reaching ruling could finally crack the epidemic of gerrymandering, which has plagued Democratic-led states as well, like California and Maryland.

“It is the blockbuster case that will affect the nature of American democracy for the foreseeable future,” he said.

Court watchers say the four liberal judges will likely remove redistricting powers from the legislature, while the four solid conservatives will uphold the legislature’s right to go about its business without federal interference. Oral arguments took place last week, but Kennedy — the swing vote — did not show his hand.

This case addresses President Donald Trump’s two executive orders earlier this year placing a temporary ban on entry to refugees and to citizens of six Muslim majority countries. Trump in September added Venezuela and North Korea — non-Muslim majority countries — to the travel ban. That led the court to remove the case from its schedule and ask the litigants to consider whether the case is now moot because the case for religious discrimination appears to have diminished.

The government is arguing that the case is indeed no longer relevant. The plaintiffs — including HIAS, the leading immigration advocacy group in the Jewish community — say they still want their case in court, arguing that even if religious discrimination is no longer the issue, the status of refugees remains very much relevant.

In an amicus brief filed before the court’s removal of the case, the ADL, the Reform movement and the Jewish Council for Public Affairs, the umbrella body for Jewish public policy groups, made the protection of refugees central to their arguments against the ban, in particular citing the tragic results of European Jews being turned away before the Holocaust

“We turned our backs on the St. Louis, a ship with nearly 1,000 Jews fleeing Nazi Germany, condemning hundreds of them to their deaths; we passed laws that overtly excluded and discriminated against the Chinese; and we rounded up more than 100,000 Japanese Americans and interned them in prison camps in the 1940s,” the brief says. “In each instance, when we later realized that we had strayed from our principles, we were left to apologize to the people who had suffered, or to their descendants, or to the memory of those who perished without descendants, in each case promising to learn from our mistakes and not to repeat them.”