Hamas reportedly agreed not to carry out terror, rocket attacks against Israel 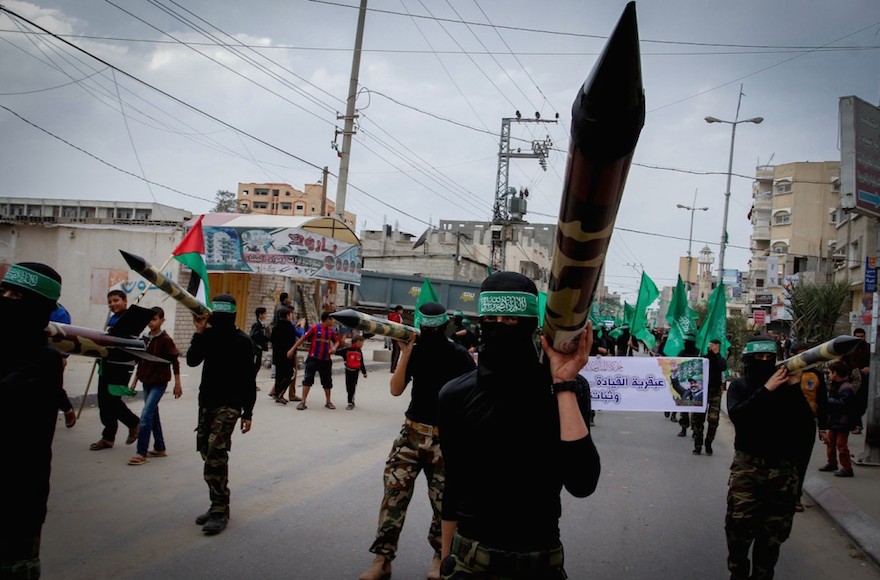 JERUSALEM (JTA) — Hamas reportedly agreed not to carry out terror attacks against Israel or launch rockets from Gaza into Israeli territory as part of the Palestinian reconciliation deal signed last week in Cairo.

The agreement requires Hamas to refrain from any activity that would foment a confrontation with Israel, Haaretz reported, citing the London-based Arabic language newspaper Asharq Alawsat.

Also as part of the agreement, the Palestinian Authority cannot take any new steps regarding Israel.

Hamas said Sunday that it had handed over control of the Gaza Strip to the Palestinian Authority, Haaretz reported, citing Hamas’ deputy leader in Gaza, Khalil al-Hayya, in an interview with the Hamas-affiliated Al-Aqsa television. However, the full transfer of responsibility for government workers, control of border crossings and other issues will take longer and require cooperation by both sides.

On Nov. 21, representatives of all Palestinian factions will meet in Cairo to discuss forming a new government, elections for president and parliament, and reforms of the political structure, Hayya reportedly also said.

The lifting of economic sanctions against Hamas by the Palestinian Authority also is contingent on changes on the ground, Haaretz reported, citing an unnamed senior Palestinian source. The authority has stopped paying Israel for electricity provided to Gaza, leading to a severe cut in the number of hours a day that electricity is available.

In a statement issued by the Prime Minister’s Office, the Israeli government called on the Palestinians to recognize Israel and disarm Hamas. It also called for the immediate release of Israeli civilians Avra Mengistu and Hisham a-Said, who are being held by Hamas, and the remains of fallen Israeli soldiers Oron Shaul and Hadar Goldin.