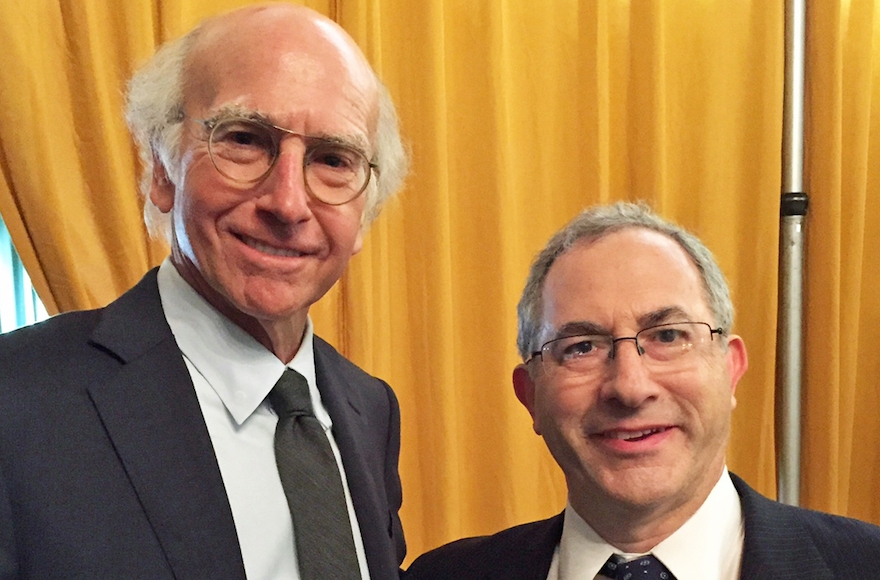 (JTA) — Kenny Ellis isn’t a rabbi. But it wasn’t much of a stretch for him to play one on TV.

After 27 years at the pulpit, he is breaking into prime-time TV this week with not one, but two, roles as the officiant of a fictional Jewish funeral. He will lead the Mourner’s Kaddish Sunday on HBO’s “Curb Your Enthusiasm” and then again Tuesday on NBC’s “Law and Order True Crime: The Menendez Murders.”

A former aspiring actor and comedian, Ellis has a history with “Curb” creator and star Larry David. The two Jews met on the New York comedy circuit in the 1970s, where they honed their routines at clubs like The Improv and Catch a Rising Star. They reunited during filming of Sunday’s episode, which will be the third of the ninth season of the hit comedy series.

“I was wondering if after all these years, he would remember me,” Ellis said of David in a statement, “and he did!”

Although the men’s careers took very different paths, they both ended up being Jewish performers of sorts. In addition to his day job as a cantor, Ellis takes his standup comedy show “The Man Behind the Matzoh Ball” on tour and last year released an album called “Hanukkah Swings.”

For his part, David co-created the legendary 1990s NBC comedy “Seinfeld,” which a Jewish exec at first dismissed as “too Jewish.” “Curb,” on which he plays a curmudgeonly version of himself, makes no apologies for its “Jewiness.” In the first two episodes of this season, David has already rekindled his love-hate romance with the owner of a Los Angeles Palestinian chicken restaurant in hopes of escaping a fatwa declared against him by the ayatollah or Iran, and orchestrated what is dubbed the “hooker mitzvah.” Apparently, Episode 3 will involve a Jewish funeral. 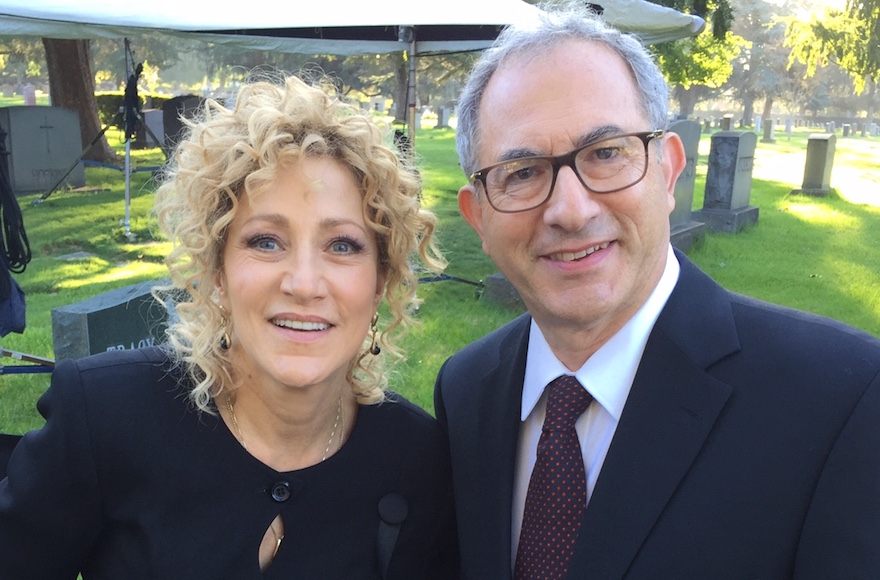 Cantor Kenny Ellis, right, poses with Edie Falco during the filming of “Law and Order True Crime: the Menendez Murders.” (Courtesy of Ellis)

Edie Falco is playing a more serious Jewish role as the star of the “Mendez Murders” true-crime miniseries. She is Leslie Abramson, the defense attorney for brothers Joseph and Galen Menendez, who were in real life famously convicted of murder for the brutal 1989 killing of their parents in Beverley Hills.

Ellison will appear Tuesday at the funeral of Falco’s character’s mother. Despite the dark subject matter, he was thrilled to meet the “Oz” “The Sopranos” and “Nurse Jackie” star.

“It was so wonderful to ‘hang out’ with Edie for the day,” he said. “She was not only an amazing actress, but also, as sweet as can be. She didn’t hide in her trailer between takes, instead, she hung out with us and ‘kibitzed.'”

After decades of studying and auditioning for acting roles, Ellis is as surprised as anyone that his first appearances alongside Emmy-award winners will draw on his synagogue experience.

“So, after all the years of acting classes, who would have thought that I would break into television doing the ‘Kaddish’ memorial prayer?” he said.