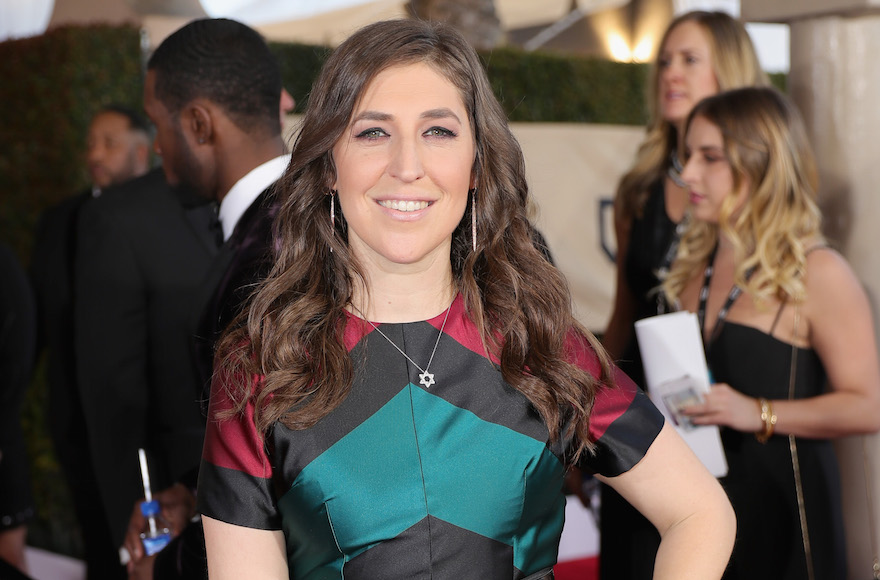 (JTA) — Actress Mayim Bialik has drawn criticism for an op-ed she wrote for The New York Times in response to the allegations of sexual assault and harassment against Hollywood mogul Harvey Weinstein.

Although she wrote Saturday that she was “shocked and disgusted” by the accusations, critics charged that Bialik had suggested dressing and acting modestly is protection against the kind of behavior Weinstein is accused of.

Bialik, 41, who stars as nerdy neurobiologist Amy Farrah Fowler in the hit CBS sitcom “The Big Bang Theory, said she was not surprised by Weinstein’s alleged actions and criticized Hollywood as “an industry that profits on the exploitation of women — and not just on screen.”

“I quickly learned even as a preteen actress that young girls with doe eyes and pouty lips who spoke in a high register were favored for roles by the powerful men who made those decisions,” she wrote.

Bialik went on to say that under the influence of her immigrant Jewish parents, she has long made decisions that she considers “self-protecting and wise.” A public proponent of modesty, she outlined her rules for behavior and dress.

“I have decided that my sexual self is best reserved for private situations with those I am most intimate with,” she wrote. “I dress modestly. I don’t act flirtatiously with men as a policy.”

Bialik, who is an observant Jew and the divorced mother of two young sons, added that while “absolutely nothing” excuses men’s sexual assault or abuse of women, “we can’t be naive about the culture we live in.” She noted that she took a long break from Hollywood to get a doctorate in neuroscience and admonished young women that “having others celebrate your physical beauty is not the way to lead a meaningful life.”

The backlash was swift.

Mashable internet reporter Chloe Bryan said that Bialik was insinuating she had evaded harm because of her choices, and that this was “irresponsible and dangerous.”

“Contrary to Bialik’s implications, it’s not just ‘doe-eyed’ women with personal trainers who experience harassment,” Bryan wrote Sunday. “It’s all of us.”

.@missmayim I have to say I was dressed non provocatively at 12 walking home from school when men masturbated at me. It's not the clothes.

Really want to again congratulate @missmayim on being too SMART to be PRETTY ENOUGH to get raped. What a great take to give to the world.

Also Sunday, Bialik posted a Facebook message saying some people had taken her words “out of context” and “twisted them to imply that God forbid I would blame a woman for her assault based on her clothing and behavior.” She called that conclusion “absurd” and said “it’s sad how vicious people are being when I basically live to make things better for women.”

But even self-described fans commented that Bialik should rethink her position.

“I still love you, but as a child molestation survivor with PTSD I can not take your words for any other way than the way they made me feel … disappointed,” one woman wrote.

Another said: “You need to take an honest read of what you wrote and commit to some serious introspection, if you think that wasn’t victim-blaming. Very disappointing.”

One of Bialik’s few defenders said, “Mayim that was a very brilliant and powerful piece! Those who are taking it out of context either didn’t read or are not being intellectual enough to allow an objective analysis. My question to them is, do they lock their doors? No thief has a justification to deprive others of their property simply because they left their door unlocked, but that doesn’t make it reasonable to leave one’s door unlocked.”

Bialik has announced the she will appear in a live Facebook video for The New York Times Opinion Section. In her Facebook post, she wrote, “lets discuss it then.”