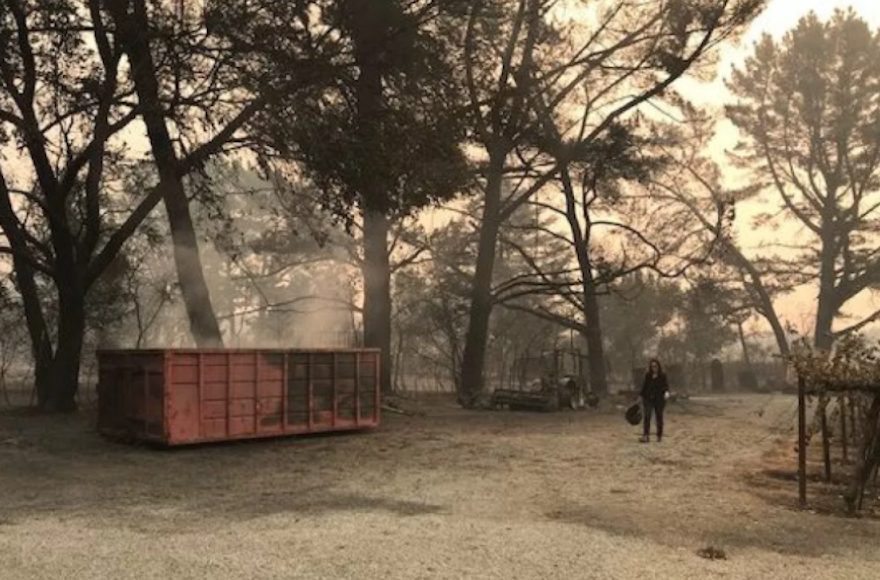 The scene at Hagafen Cellars on Oct. 10, 2017, when land, vegetation and equipment were burned in the fires raging throughout Wine Country this week. (Courtesy of Hagafen Cellars)
Advertisement

(JTA) — Hagafen Cellars, the only kosher winery in the Napa Valley and Sonoma, partially opened after sustaining heavy damage in the wildfires raging throughout Northern California.

Several buildings and virtually all of the winery’s agricultural equipment were destroyed in the fire. And while one of the winery’s 12 acres of vineyards was burned, the grapes already had been harvested. The inventory remained intact as well.

Most of the hundreds of wineries in the region were forced to close in the first days of the fires, which have been burning for more than a week. Some of the wineries burned to the ground, according to J.

There have been at least 41 deaths reported from the area’s wildfires and more than 80 people remain missing. The fires have burned over 217,000 acres and destroyed more than 5,700 homes and other structures. Damage estimates have topped $3 billion.

As of Monday night, some 60 percent of the fires were reported contained, with rain in the forecast for later in the week.

The Jewish Community Federation of San Francisco, The Peninsula, Marin and Sonoma Counties reported that as of Monday evening, the nine synagogues in the path of the fires were unharmed, as was the JCC of Sonoma County.

Two members of the Jewish community are confirmed dead, including a past president of Congregation Shomrei Torah in Santa Rosa. As of Sunday, 26 families at one Santa Rosa synagogue and seven families at another synagogue are known to have lost their homes. Synagogues are helping provide the families with meals.

The Israeli humanitarian group IsraAid is on the scene providing supplies and grief counseling, according to the federation. In addition, representatives from the Sonoma County Chabad Jewish Center have been visiting emergency centers and providing support, as well as meals via Oakland Kosher.