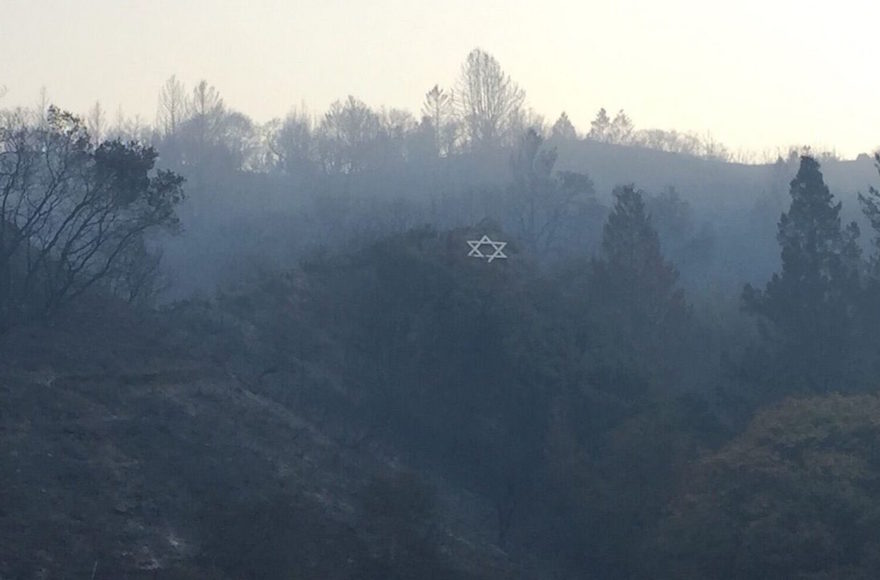 Although most of Camp Newman’s buildings were lost in the North Bay Area wildfires, camp officials said an entrance gate, prayer books and prayer shawls survived the flames, along with an iconic wooden Star of David that overlooks the Union for Reform Judaism camp from a rocky perch.

The camp’s executive director, Ruben Arquilevich, and other camp officials visited the fire-ravaged site for the first time on Friday and were shocked by the scene even before they arrived.

Arquilevich in an interview Tuesday said the road to the camp had featured “scenery filled with blue skies and green trees and grass, and the first part has always been a neighborhood with a couple of hundred homes.”

“But as we drove through that neighborhood, all we saw were homes burned to the ground. This used to be a color scene, and it was black and white. It just haunted me,” he said.

Arquilevich’s spirits were raised, however, when he saw that the giant gate to the camp, inscribed with the words “May you be blessed as you go on your way,” was standing. Grapes dangled from some vines in the camp’s vineyard, which was undisturbed.

He was further relieved when the visitors found that a pair of Torah arks created by former camp artist-in-residence Helen Burke had survived. One had been dubbed the “Little Ambassador.”

At least 41 people have been killed as the result of 15 major wildfires across California. Over 217,000 acres and 5,700 structures have been destroyed.

The group made the 15-minute hike to the 6-foot Star of David, at which campers traditionally scream “I love being Jewish!” The wooden symbol “was completely untouched, surrounded by hundreds of yards of blackened brush,” Arquilevich told J.

The bimah of an amphitheater was heavily damaged, and all the nearby sheds were charred — “except for this one shed that contains our sacred texts and our prayer books and the tallitot,” Arquilevich said.

“It was completely intact,” he said. “We all just about broke into tears there because the tallitot were safe. That was just another miracle and just so moving. It pointed in the direction we’re going, with the idea that Camp Newman will continue.”

Rabbi Rick Jacobs, president of the Union for Reform Judaism, which owns and runs the 480-acre camp east of Santa Rosa, joined Arquilevich for the tour of the site. He said officials are determined to hold camp in 2018. About 1,400 children attend Camp Newman each summer, and 40 to 50 staffers come from Israel to work as counselors.

“We will have camp this summer,” Jacobs said. “I can’t tell you exactly where or how.”