Conservative movement doubles down on intermarriage ban, but urges communities to welcome couples 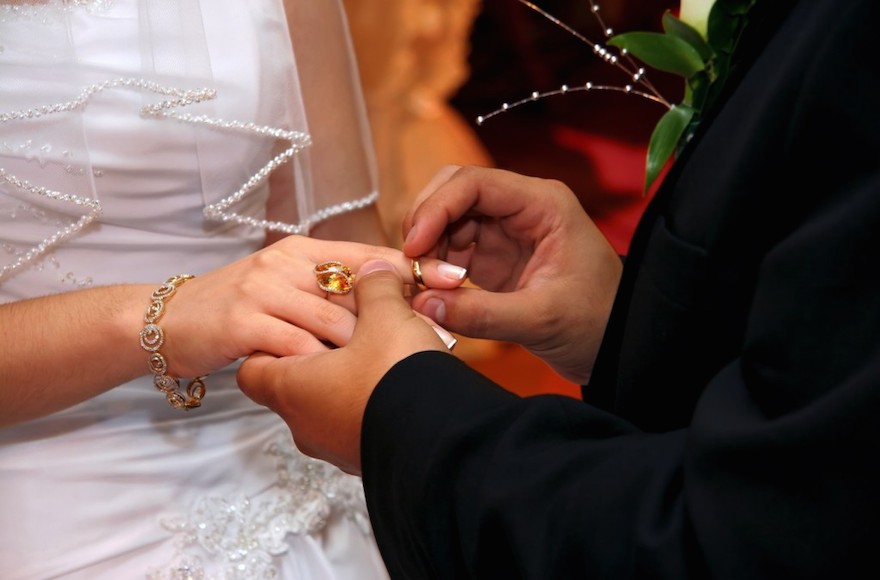 NEW YORK (JTA) — The Conservative movement will maintain its ban on rabbis performing interfaith marriages while seeking to welcome couples who are already intermarried, according to a new letter signed by the movement’s four leaders.

The letter, published this week and addressed to the centrist movement’s clergy, educators and leaders, follows a summer when a few prominent Conservative rabbis announced that they would begin officiating at intermarriages. It does not represent a change in the movement’s policy or practice of Jewish law.

“We affirm the traditional practice of reserving rabbinic officiation to two Jews,” the letter reads, adding that the movement’s leaders “are equally adamant that our clergy and communities go out of their way to create multiple opportunities for deep and caring relationships between the couple and the rabbi, the couple and the community, all in the context of welcome and love that extends well before the moment of the wedding and well beyond it too.”

The letter was written by Rabbi Bradley Artson, dean of the Ziegler School of Rabbinic Studies in Los Angeles, and co-signed by Arnold Eisen, the chancellor of the Jewish Theological Seminary; Rabbi Julie Schonfeld, CEO of the Conservative Rabbinical Seminary; and Rabbi Steven Wernick, CEO of the United Synagogue of Conservative Judaism.

The four wrote about their position in a JTA op-ed appearing Wednesday.

Since 2000, more than 70 percent of non-Orthodox Jews have married non-Jewish partners, according to the Pew Research Center’s 2013 study of American Jewry. The other major Jewish denominations in the United States are split on the issue: the Reform movement allows intermarriage and the Orthodox prohibits it.

Conservative Judaism aims to maintain fealty to traditional Jewish law while remaining relevant to the modern world. Its rabbis are prohibited from officiating at or attending intermarriages, but recently the movement has taken steps to welcome intermarried couples both before and after the wedding. This year, the movement’s synagogues voted to allow non-Jews as members.

But several of the movement’s rabbis have begun officiating at intermarriages, arguing that the movement has not gone far enough in embracing the spouses of many young Jews. Last December, Rabbi Seymour Rosenbloom of Philadelphia was expelled from the Rabbinical Assembly umbrella group for performing intermarriages. In June, the Conservative-ordained clergy at B’nai Jeshurun, an influential, nondenominational New York synagogue, announced that they would begin performing intermarriages. So did Rabbi Amichai Lau-Lavie, who heads the experimental congregation Lab/Shul in New York.

Conservative leaders responded at the time by reaffirming their opposition to intermarriage while pledging to respect and welcome intermarried couples.

“We believe — and the data confirm — that by far the most effective path toward building a Jewish future is to strengthen Jewish identity, beginning with the Jewish family,” read a June statement from the Jewish Theological Seminary. “This is also the path which Torah and tradition command. JTS will in coming months expand our efforts to welcome all families, including those that are interfaith, to explore Judaism together with us.”

This week’s letter echoes that language.

“We all know that intermarriage is a loving choice people make in an open and accepting society,” Wernick told JTA. “As rabbis and leaders, we also have a commitment to Jewish law and Jewish marriage. How do we create a language that acknowledges both of these realities as well as a commitment to welcome those Jews and families to journey Jewishly on this path?”

The Conservative movement can, and should, welcome the intermarried