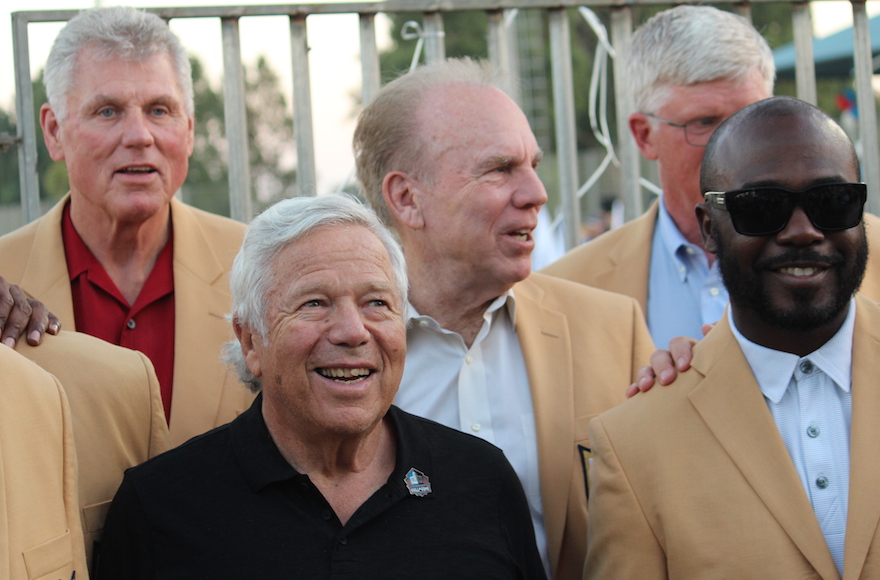 (JTA) — As they step off the charter bus in Tel Aviv, you might confuse them for just another American tour group — if not for the yellow Hall of Fame jackets and all those Super Bowl rings.

In July, Robert Kraft, the New England Patriots owner and celebrated Jewish philanthropist, led a high-profile pilgrimage: He brought 18 National Football League Hall of Famers (and their spouses!) by private jet to Israel for a weeklong goodwill mission.

Like any dedicated tourists, they took plenty of video — which the rest of us can now get to see. At 8 p.m. Friday, the NFL Network will premiere “Touchdown in Israel,” a one-hour special as part of its NFL Films Presents series. (Yes, that’s Shabbat — so set those DVRs before sundown if you’re so inclined.)

The short film follows football greats Joe Montana, Jim Brown, Eric Dickerson, Marshall Faulk and a dozen others as they embark on an itinerary any Birthright alum would recognize, from the Old City to Masada to the Dead Sea.

First, however, they stop to coach a mix of Jewish and Arab high-schoolers in games featuring teams such as the Netanya Sharks and the Kiryat Ono Wolves. (A little more than 2,000 Israeli men, women and children play the game — tackle and flag versions — according to the website of American Football in Israel, which is supported by the Kraft Family Foundation.)

Then there’s a quick jaunt up to the Mount of the Beatitudes overlooking the Sea of Galilee, where Jesus is believed to have delivered his Sermon on the Mount. The moment is particularly poignant for eight-time Pro Bowl wide receiver Cris Carter, who is seen telling Kraft how religion saved him when drug addiction threatened to destroy his career. Later, several players take the opportunity to be baptized in the nearby Jordan River.

One who did not was linebacker Andre Tippett, who besides recording more than 100 career sacks for the Patriots, converted to Judaism during the 1993 season.

“It was the happiest day of my life,” Tippett says of the visit to the mikvah that culminated his process of becoming a Jew.

Those are just some of the show’s many touching displays. There’s also the rickety, cane-aided Brown — considered one of the toughest players of all time, now in his 80s — shuffling up to the Western Wall to offer a prayer.

And at a final dinner, each player reflects on what it’s meant to spend the week in this land with this group.

“You guys are my heroes,” Carter says.

“For me,” Faulk adds, “coming from the Ninth Ward of New Orleans, Louisiana, to be in Israel … unbelievable.”

Kraft’s late wife, Myra — who was universally mourned by the Jewish and pro sports communities when she passed away in 2011 — is a constant presence, too. The couple honeymooned in Israel in 1963 and made a habit of bringing groups to visit for the first time.

“Everywhere I go, I see my wife here,” Kraft says, his voice cracking.

But the show features plenty of light moments.

There’s the amusement of watching fearsome Buffalo Bills defensive end Bruce Smith and human bowling ball Jerome Bettis, a running back for the Pittsburgh Steelers, slather themselves in mud and float like happy babies in the Dead Sea. At Masada, the Hall of Famers seem awestruck by the story and the scale of the mountaintop fortress.

Remarking on the incredible echo-acoustics of the surrounding canyons, Faulk declares, “We gotta build a stadium right there — imagine the crowd noise!”

Indeed, he might. The trip — and the TV special — concludes with the dedication of the Kraft Family Sports Complex, a $6 million, 25-acre project in northwest Jerusalem that includes the first full-size (American) football field in Israel. Even NFL Commissioner Roger Goodell flew over for the ceremony, which he hoped would mark a beginning in the game’s growth.

As Kraft told JTA last year following the announcement of the Jerusalem complex, team sports “help unify those who might otherwise be divided.”