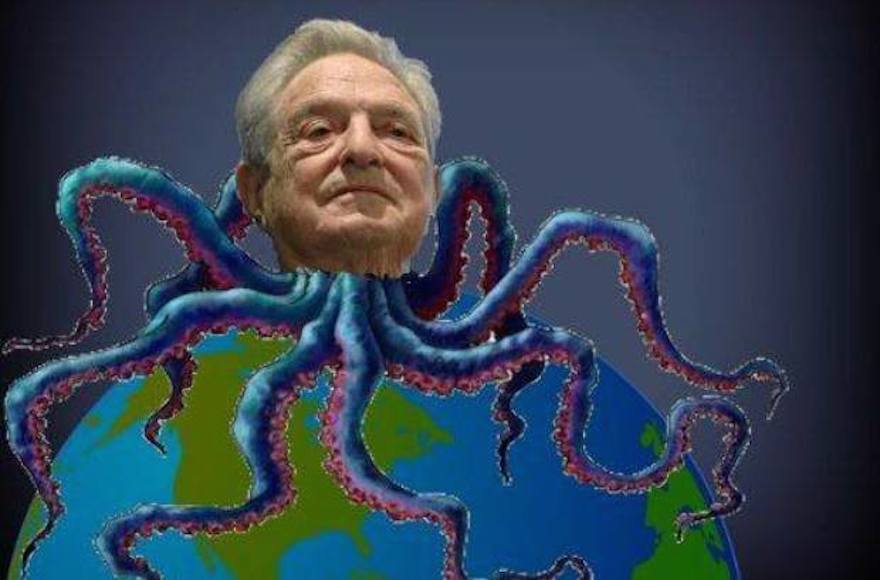 A caricature of George Soros as a tentacled monster has appeared on various right-wing and pro-Russian web sites since at least 2015. (Google)
Advertisement

WASHINGTON (JTA) — The chairman of the board of the Israeli American Council tweeted and then deleted an anti-Semitic image of George Soros as a multi-tentacled monster astride the globe.

“Yesterday, the origins of an old antisemitic carton that has some similarity to the image I used, was brought to my attention and I removed the Soros tweet,” Adam Milstein said in an email Saturday to JTA. “I’ll try to be more careful in the future.”

Pro-Palestinian activists on Thursday pointed out Milstein’s use of the image  — a head shot of Soros superimposed on illustrations of octopus legs and, in the background, the earth. The tweet referred to the recent decision by Soros, a Jewish hedge fund billionaire, to donate much of his fortune to Open Society, the institution he founded several decades ago to promote democracy.

Soros, who in recent years has backed groups critical of Israeli government policy, has become a bugbear for the pro-Israel right. In his deleted tweet, Milstein said the $18 billion that Soros’ gifted would be “used for civil unrest, dividing Americans and suppressing free speech.” An attached link, to a Wall Street Journal story on the Soros gift, did not provide support for Milstein’s allegations.

Anti-Semites also regularly attack Soros, whom they see as part of a Jewish conspiracy to manipulate foreign markets and governments. The image Milstein shared has been appearing on dozens of anti-Semitic and pro-Russian websites since at least 2015.

The image of Jews as tentacled creatures controlling the globe is a classic anti-Semitic trope, and has appeared in Nazi literature and in the postwar era in cartoons published in the then-Soviet Union and the Arab world.

Milstein told JTA he was focused on the IAC conference taking place next month in Washington, D.C.

“I didn’t personally select that image,” he said of the tweet. Milstein regularly writes about anti-Semitism on the right and the left.

“My Thanks to 2 fierce anti-Israel activists who advised me an image I used is similar to this old #Antisemitic cartoon,” said Milstein, tagging Max Blumenthal and Ali Abunimah. “I deleted my tweet.”

My Thanks to 2 fierce anti-Israel activists who advised me an image I used is similar to this old #Antisemitic cartoon. I deleted my tweet pic.twitter.com/Z9tJvU9ptP