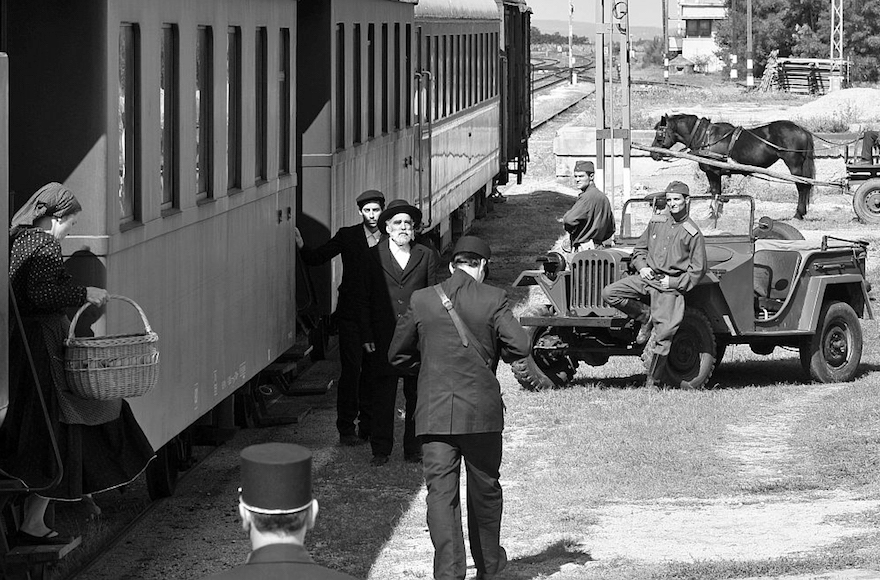 (JTA) — The time is just after the defeat of Nazi Germany. Two Orthodox Jews disembark from a train at a rural station in Soviet-occupied Hungary and, after offloading a heavy bag, they begin a silent, hourlong walk to a nearby village.

The purpose of their journey is not known. But their arrival in the village sets in motion a series of tragic and violent events, as some residents worry the visitors will expose crimes they committed during the Nazi occupation, with potentially deadly consequences for the perpetrators.

Such is the premise of the award-winning Hungarian movie “1945.” The black-and-white feature, filmed last year with funding from the Claims Conference, is one of just a handful of movies ever produced in Hungary about the theft of Jewish property during the Holocaust. In the U.S., the film will premiere Nov. 1 in New York, with a national rollout to follow.

Despite being a low-cost production lacking marquee names, “1945” has found major success at international film festivals. It won awards at the San Francisco Film Critics Circle as well as at the Berlin Film Festival and the Jerusalem Film Festival. One critic called it a “subtly crafted masterpiece.”

And while the film is fictional, it has struck a nerve among Hungarian Jews whose families lived through the suspicion and hostility depicted in the movie.

“It is an important production which, despite being fictional, nonetheless describes for the first time in film the reality of what actually happened to us,” Peter Feldmajer, a former leader of Hungary’s Jewish federation, told JTA.

In the film, the two silent Jews — Sámuel Hermann and his son — arrive on a fateful summer day: the wedding day of a son of the village’s de facto mayor. Fearful that the Jewish arrivals are an expeditionary force for Jews who used to own property there, the town’s leader frantically mounts cover-ups of his own crimes. A group of villagers armed with pitchforks menacingly gather around the newcomers as they pray for their dead in the village’s disused Jewish cemetery.

The scene is an obvious reference to the 1946 anti-Semitic pogrom in the city of Miskolc, during which two Jews, including one police officer, were murdered by participants of what began as a workers’ demonstration and escalated into a lynching.

“This scene accurately and bravely represents why it was impossible for Jews to seek justice in the postwar period,” said Feldmajer, whose father was a Holocaust survivor from a Hungarian village where locals stole his family’s property.

Robert Frolich, the rabbi of Budapest’s main synagogue, praised the filmmakers for depicting the threat of violence rather than its use, which was unusual.

“The pogroms happened here and there,” he said. “But the fear of having to give back the property, the shame of what was done to Jews – even if only by not defending them – that was common, that was the rule, and this is the first film that I’m aware of capturing this.

“This element of the Holocaust — the neighbors, the shop owners who took everything the Jews had and didn’t want to give it back – that has remained a taboo, which this film helps break,” he added.

After the fall of communism, the Hungarian government instituted several laws that were supposed to facilitate restitution claims for property privately owned by Jews. But the procedure put in place “made it difficult for many potential claimants” to receive compensation, according to the World Jewish Restitution Organization, citing the laws’ narrow definition of an heir along with foot dragging by justice authorities.

These problems were partially addressed in restitution for heirless property. But it did not address the problem of individuals who tried but could not receive compensation for artifacts and real estate stolen from their families in Hungary, where more than half of the prewar Jewish population of 825,000 was murdered.

In parallel, over the past 15 years, Hungary’s political scene took a rightward shift. Prominent politicians from Prime Minister Viktor Orban’s ruling Fidesz party have in recent years been promoting or tolerating the glorification by others of the legacy of Nazi collaborators and ardent anti-Semites, triggering an open row with the Jewish community and liberals. Among those honored with statues in Budapest alone since 2013 are Miklos Horthy, the country’s pro-Nazi wartime leader, and  Gyorgy Donath and Balint Homan, two Holocaust-era politicians who prompted anti-Semitic laws.

In this political climate, even productions about the Holocaust that do tackle Hungarian complicity — including the Hungarian film “Son of Saul,” which won the 2016 Oscar for best foreign language film — have been denounced by nationalists from the anti-Semitic Jobbik party, who urged the national film fund to withhold funding for “Holocaust productions,” as one party leader called them.

Amid the hasty cover-up efforts depicted in the film — including the silencing of remorseful accomplices — “1945” also tackles how neighbors who used to be friendly turned on their Jewish compatriots while under the rule of Nazis and their allies. In many instances, this was done not out of ideological hatred, but in order to survive their new circumstances or make the most out of them.

At the same time, the film also acknowledges those who kept valuables for Jewish neighbors and who despised the looting by other non-Jews.

“Mostly it gives us an idea for the first time of how they felt, the Jews and the non-Jews, in those chaotic days after World War II,” Frolich said.