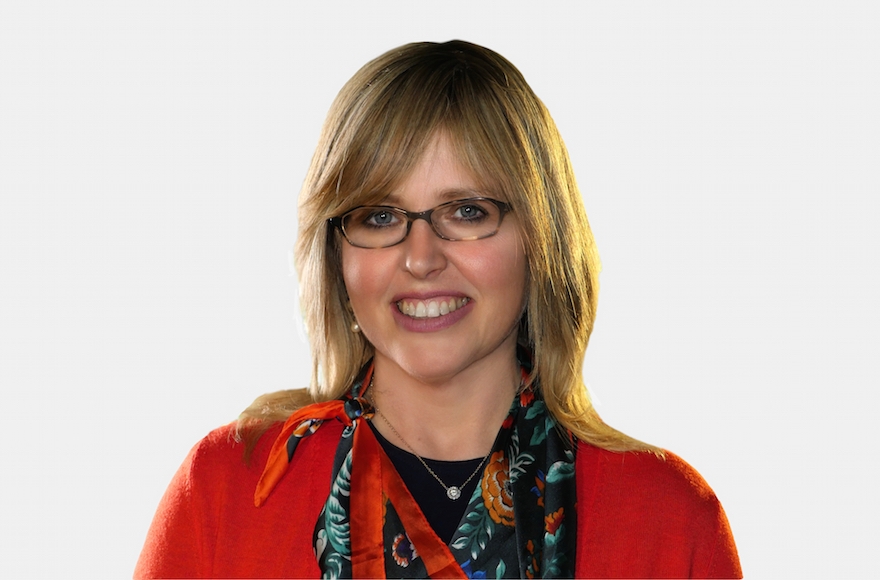 Adina Shmidman, a doctor of educational psychology and the founder of a mentoring program for rabbis' wives, will be the first director of the Orthodox Union's new Department of Women's Initiatives. (Courtesy of the OU)
Advertisement

NEW YORK (JTA) — The Orthodox Union is founding its own division to advance women as congregational leaders, as well as to promote Jewish study and communal participation for women in Modern Orthodoxy.

The announcement comes nearly nine months after the group, an umbrella association of centrist Orthodox synagogues, issued a ruling banning those synagogues from hiring women for clergy roles.

The Department of Women’s Initiatives, which will launch Nov. 1, aims to increase women’s participation in synagogues in a way the O.U. feels is consonant with Orthodox tradition.

“I think it’s important for women to hear what they can do,” said Adina Shmidman, the department’s incoming director. “This department is really focused on the positive, and the will to continue and find opportunities for women. I think positivity and enthusiasm and uniting women through Torah study is primary, whether it be personal leadership opportunities or communal leadership roles.”

The department will have a budget in the hundreds of thousands of dollars and provide guidance, networking and funding for women who want to be professional leaders in Orthodox synagogues. It will also promote women as congregational scholars-in-residence and encourage women to take on lay leadership roles at synagogue. In addition, it will encourage the physical expansion of women’s spaces in synagogues.

Also, the department will  offer high-level women’s classes in Torah study, as well as programs for youth. And it will form a think tank to analyze programs and resources for Orthodox women.

Conceived three years ago, the department is in part a response to the ascendance of women to public leadership roles during the past few decades, O.U. leaders said. They also noted that there is a much wider range of educational opportunities available to Orthodox women than in the past. A synagogue with an entirely male senior staff, said O.U. President Moishe Bane, risks unintentionally sidelining half its membership.

“It’s difficult to expect that when men are the primary communal leadership that they’ll understand and appreciate the roles women play and should be playing, and the needs they have,” Bane said. “I think there’s a recognition in the Orthodox Union that the world is changing rapidly, and people’s expectations are changing rapidly.”

In February, the group issued a ruling barring women from holding a title such as “rabbi,” or even from serving without title in a role in which she would be performing “common” clergy functions such as ruling on legal matters, officiating at life-cycle events, delivering sermons from the pulpit during services, leading services and serving as a synagogue’s primary authority.

The same ruling urged an expanded role for women as teachers and pastoral counselors, and as lay leaders and professionals. The Rabbinical Council of America, another Orthodox umbrella group, has also issued a ruling against women clergy.

Four Orthodox synagogues that are O.U. members currently employ women in such positions — all of them graduates of Yeshivat Maharat, a liberal Orthodox women’s seminary in Riverdale. Women who graduate from the seminary receive the title “maharat,” a Hebrew acronym for “Jewish legal, spiritual and Torah leader” that avoids conferring the title “rabbi.” But earlier this year, the O.U. sent representatives to these synagogues asking the female clergy to change their titles.

According to a recent survey, a majority of U.S. Modern Orthodox Jews either fully or somewhat agree that women should have “expanded roles in the clergy.” More than one-third either fully or somewhat support a woman holding a position with “rabbinic authority.” A solid majority says a woman can serve as president of a synagogue — a lay position. The Jewish Orthodox Feminist Alliance website currently lists over 80 women who have served as presidents of Orthodox congregations.

Bane and Allen Fagin, the O.U.’s executive vice president, said the department’s establishment is not a reaction to fallout from the ban. Rather, Bane said the ban itself was a result of the department’s planning process, which included an examination of Jewish legal limits on women’s leadership.

The department will advance women as teachers, professional staff and pastoral counselors. But Bane said a woman should not be “the face of the synagogue.”

“One of the most important conversations we believe needs to take place in our community is to define appropriate job descriptions and titles for women who will serve as synagogue professionals, in roles that are consistent with Jewish law, consistent with tradition, but are extremely important within the shul,” he said.

Sharon Weiss-Greenberg, director of the Jewish Orthodox Feminist Alliance, said she hoped the O.U. would make good on its promises to advance women and invest more in women’s programs. Along with positive actions, she recommended that the O.U. stop actively opposing Orthodox women clergy and the congregations that employ them. Weiss-Greenberg spoke to JTA without knowledge of the department’s establishment, which is being first reported here.

“They list all these things that women can and should be doing,” she said, referring to the O.U.’s Jewish legal ruling. “Actions speak louder than words. Let’s hear from women — women who are not token women, who are highly educated, passionate and invested.”

Shmidman is the kind of synagogue leader the O.U. hopes to develop more of. She has a doctorate in educational psychology and serves her community as the rebbetzin, or rabbi’s wife, of her synagogue in the Philadelphia suburb of Lower Merion, Pennsylvania. In 2015, she founded the Rebbetzin to Rebbetzin Mentoring Program under the auspices of Yeshiva University, which pairs younger rabbis’ wives with more experienced rebbetzins who guide them on how to serve and navigate their communities.

While Shmidman hopes to continue training rebbetzins, she wants to expand leadership and learning opportunities for other women as well. The department will push synagogues to offer classes for women on par with what men receive — such as a “daf yomi,” which that covers a page of Talmud daily — as well as weekly or monthly women’s learning groups and mother-daughter study programs.

But Shmidman said she also wants to move beyond formal “frontal learning.” She suggested, as an example, a model where participants each study texts and teach them to each other.

“Text study is extremely important, but classes on mind, body, soul, there’s so many avenues where Torah can come through beyond text study,” she said, adding that a goal will be “helping people find God and Torah in all areas of their lives.”

One of the department’s goals is to make the synagogue a friendlier space for women, who sit separated from men during prayer and, often, Torah study. Fagin said that at some synagogues, the women’s section of the sanctuary feels isolated from the men’s section and that it’s not always accessible.

“There’s no question that shuls are organized in many ways around specific activity that is typically engaged in by men, often not by women,” Fagin said. “There were physical things that could be done to be more conducive to the physical participation of women in prayer.”

Bane acknowledged that among Jews to the right of the O.U., some of the department’s activities may be controversial. But he said the group hopes to show that just because Jewish law is primary doesn’t mean Jewish women need to be secondary.