Why we waited before publishing that story about Elie Wiesel 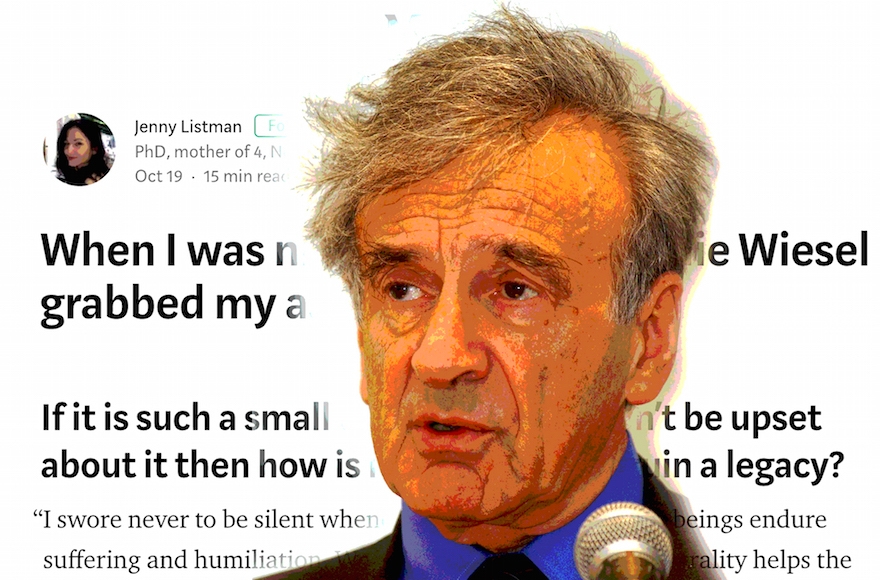 NEW YORK (JTA) — If a woman called the JTA office and said she wanted to tell her story of sexual harassment by a prominent community figure, we’d have questions. Would she put her name to the accusations? Can she corroborate them? Can she provide specific dates and descriptions of when and where the alleged abuse took place? Are there other people who could confirm her story?

We’d also tell her that we are going to seek comment from the other side and she should prepare herself for the response.

On Monday, an author named Jennifer Listman published an essay on the self-publishing site Medium alleging that the Nobel laureate and Holocaust survivor Elie Wiesel had fondled her during a Jewish fundraising dinner in 1989, when she was 19. The essay appeared in the wake of serial allegations of sexual assault and abuse against the Hollywood mogul Harvey Weinstein, as well as a spate of #metoo testimonies by women who had been harassed and worse by powerful men.

Listman’s story stood out from those testimonials owing to the celebrity of the accused, and the wide chasm between Wiesel’s public persona and accomplishments and the sordid nature of the alleged act. Not surprisingly, her account rocketed around the web. A few Jewish sites, including the Forward, amplified her account, and Salon and Newsweek ran items quoting it.

JTA prides itself on being a comprehensive Jewish news site, but after a long debate on Monday we decided not to run an item about Listman’s accusations — at least not then. As editor in chief, I reminded staff of the journalistic standards, outlined above, to which we would normally put accusations of this nature. One of our reporters started making calls, seeking comment from Listman and trying to reach others whose Facebook posts suggested they might have some relevant insight into her charges. Unable to reach Listman, we still held off on publishing.

On Tuesday morning, Newsweek reporters seemed to have advanced the story in two significant ways: They interviewed her ex-husband, mentioned in Listman’s account, who did not witness the alleged assault but “remembers his then-girlfriend’s reaction and their conversation after.” They also got a comment from the Elie Wiesel Foundation for Humanity, which rejected Listman’s accusation and chided Newsweek for republishing “such a specious and unsubstantiated charge.”

My relatively bloodless description does not capture the heated debate we had in the office — a debate informed and in some ways distorted by the ways the new rules of social media and internet publishing clash with older journalistic standards. It’s noble to want to apply traditional reporting practices to the story, argued one colleague, but the story is already out there and being widely discussed. Others suggested that ignoring Listman’s essay amounted to doubting and even shaming the victim of sexual assault — a tendency that allowed alleged predators like Weinstein, Bill Cosby and Roger Ailes to go unpunished for so long. And nearly everyone was uncomfortable that Wiesel, who died in 2016, isn’t alive to respond to the charges.

I bristle at the idea that just because something is being talked about it should be reported; that gives a lot of power to the rumor mill. It allows news outlets to make the disingenuous decision of writing not about the thing itself but the “controversy,” or passing along reporting that does not meet their own standards.

It’s not a question of whether we believe a story or not, but whether we tried to verify it. “In jumping on unverified information and publishing it alongside hedging language, such as ‘reportedly” or ‘claiming,’ news organizations provide falsities significant exposure while also imbuing the content with credibility,” media critic Craig Silverman wrote in a 2015 report for Columbia’s Tow Center for Digital Journalism. “This is at odds with journalism’s essence as ‘a discipline of verification’ and its role as a trusted provider of information to society.”

On the other hand, I didn’t want JTA to be part of  the “persistent and … pervasive culture of doubting what women say,” as Leigh Gilmore, a professor at Wellesley College, describes it. I don’t think applying journalistic standards necessarily implies doubt. But I am a man and cannot appreciate what it means to be repeatedly asked to account for my feelings, or justify my complaints, or confirm the damage I feel was done to me.

I think the gender divide also informed my sense of the severity of what Wiesel is alleged to have done. Listman writes that Wiesel “grabbed my ass” after he “shoved” himself between Listman and her boyfriend as they posed for a group photograph. After the photo, Wiesel ran to join the crowd at the fundraiser, and that was the last she saw of him. It sounds gross, but absent reports that this was habitual behavior, I found myself asking, does it belong in the same category as Weinstein’s serial and extended stalking and hostage-like encounters with women, or Ailes’ lengthy legacy of sexual harassment and coercion? Does Wiesel’s name deserve to be forever linked with this boorish moment from nearly 30 years ago?

That may make me sound sexist, but I am trying to be honest here. I have seen women raise similar questions in discussions of Listman’s essay on social media (and, for that matter, in our office). At some level, I don’t think I or they are blindly defending a male or diminishing incidents of unwanted touching or trying to argue Listman out of the hurt and anger she still feels. Perhaps it has something do with the specific cause Wiesel represents. The Holocaust is sacrosanct and central to modern Jewish identity. Wiesel gave voice to all who died in and survived the Shoah, and prodded the conscience of the West to make sure its memory stayed alive and its lessons relevant. Maybe some people recoiled from Listman’s account — and want not to believe it — because they feel to discredit Wiesel would sully Holocaust memory itself.

That’s conjecture, however, and such misgivings played no part in our decision to hold off on the story. It’s not my job to protect Jewish leaders or causes from their own apparent or alleged misdeeds.

Others in the Jewish media had misgivings about reporting on Listman’s allegations, and few did. The Forward published an account of Listman’s essay and later retracted it. Its editor, Jane Eisner, explained that “the story did not meet our journalistic standards.”

I felt relieved that we held off, telling colleagues that it’s better to be right than early.

By Tuesday, however, we decided to publish an item, mainly because Newsweek’s reporting brought some outside scrutiny to what Listman had written and drawn a newsworthy response from Wiesel’s foundation. I wish we had gotten the same responses a day before, but if I’d rather be right than early, I’d rather be late than wrong.

The Wiesel story suggests how rules are changing faster than many of us can keep up with. The Weinstein, Fox News and Cosby scandals have changed the  conversation about sexual abuse and seemed to have empowered, at last, the victims over the perpetrators. And social media and the unmediated nature of the web have challenged the old-fashioned ways of journalism.

I still feel the old rules apply, and victims’ accusations are only strengthened when a reporter can fully corroborate them and put them in an unassailable context. That’s what The New York Times and The New Yorker did with the Weinstein story — developing and strengthening it over months and months and making it almost impossible for Weinstein to deny the evidence and discredit his accusers. Important exposes of sexual abuse — at private schools like Horace Mann or within important Jewish organizations — also took months if not years of hard work and shoe leather, with stunning impact.