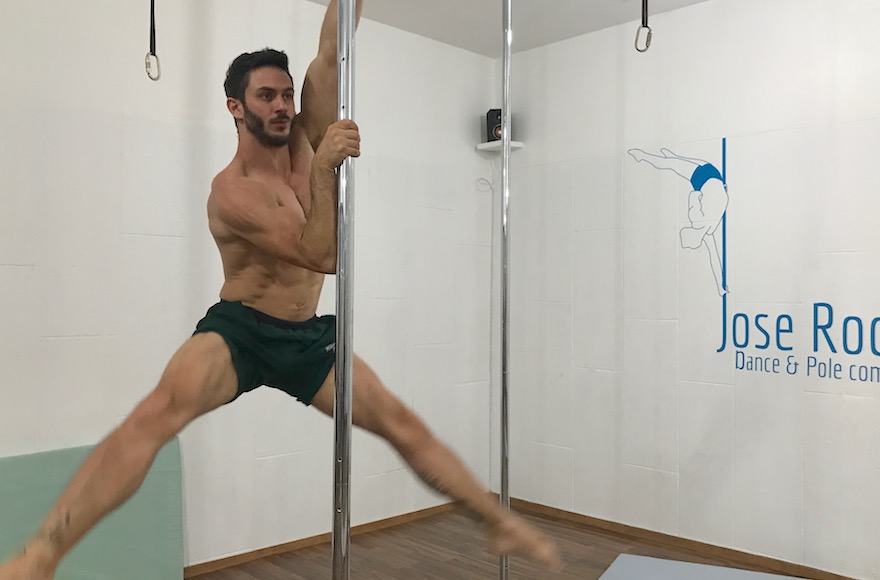 On the sunny street outside the dance studio, passers-by stop to gawk through the picture windows. Some giggle guiltily, while others snap photos with their cellphones.

They could be forgiven for assuming the performance was somehow connected to the strip club located across the beachside plaza. But studio owner Jose Rodrigues says he puts his pole dancing classes on display in hope of drawing a distinction.

“I love it when people watch,” he told JTA, laughing. “Stare through the glass, come inside. You’ll see we are doing a real sport.

“And over there,” he added, gesturing in the direction of the notorious Pussycat strip club, “they’re doing … something different.”

By bringing pole dancing out of the strip clubs and into the daylight, Rodrigues and other instructors in Israel have helped make it a national sensation and a legitimate sport — or at least almost legitimate.

In the Jewish state, pole dancing has come a long way in a short time: Less than a decade ago it could not be found outside strip clubs. Today there are at least 18 places to take pole dancing classes across the country. Thousands of women — along with fewer numbers of men and children — have joined the trend. 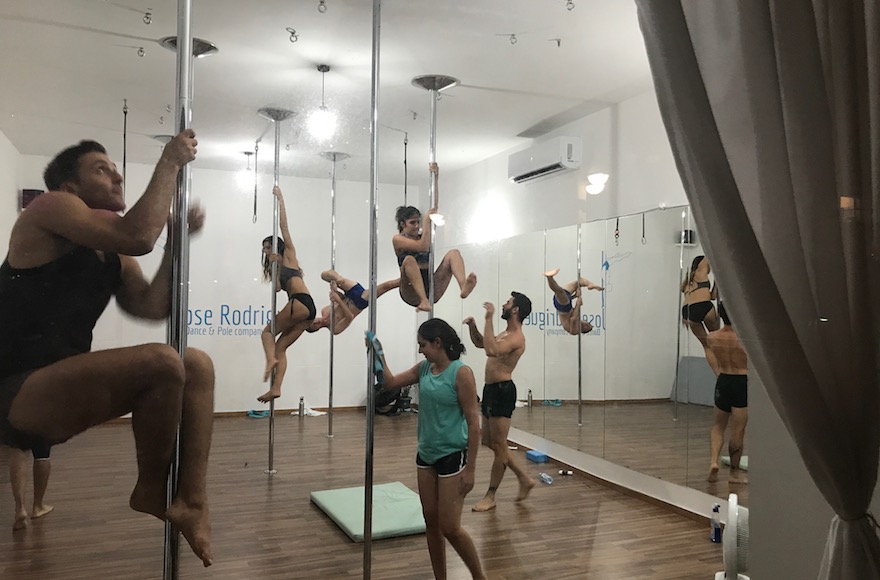 Rodrigues, 28, who moved to Israel from South Africa in 2012, can take some credit for pole dancing’s recently elevated status. A former professional ballet dancer, he has assumed a leading role in professionalizing the practice in his adopted country.

In addition to his work as an instructor, Rodrigues in 2014 founded the Israel chapter of the International Pole Sport Federation, which mandates a non-erotic, gymnastics-like form of pole performance. Every year since he has organized the Israel Pole Sports Championship, in which members of about a dozen local studios compete. The winner qualifies for the World Pole Sport Championships, which is held every year in one of the member countries.

Rodrigues also promotes an athletic image of pole dance in the media. In recent years he has appeared repeatedly in newspaper and TV stories. Earlier this month, he impressed incredulous anchors on Israel’s main sports channel, Sport5, by removing his shirt — showing off his buff, tattooed physique — and performing feats of strength and balance on the pole.

“Most men laugh until they see what we really do,” he said. “I’ve been getting a lot more interest lately from straight men, who want to learn power tricks to do on the beach, like flags and backflips.”

Rodrigues aspires to eventually go to the Olympics, or at least send an Israeli team.

“One day, hopefully I can get a win for Israel. That would be the dream,” he said.

It is not entirely a fantasy. The Global Association of International Sports Federation, or GAISF, this month gave the International Pole Sport Federation “observer” status, provisionally recognizing pole dance as a sport. According to a Washington Post story on the development, full recognition by the organization “serves as a great boost for any sport hoping to one day land in the Olympics.”

Other newly minted observers include the World Dodgeball Association and International Table Soccer Federation — also known as foosball. In announcing the picks, GAISF President Patrick Baumann said the organization would do everything possible to help these sports “realize their full potential” and “one day maybe become part of the Olympic program.” 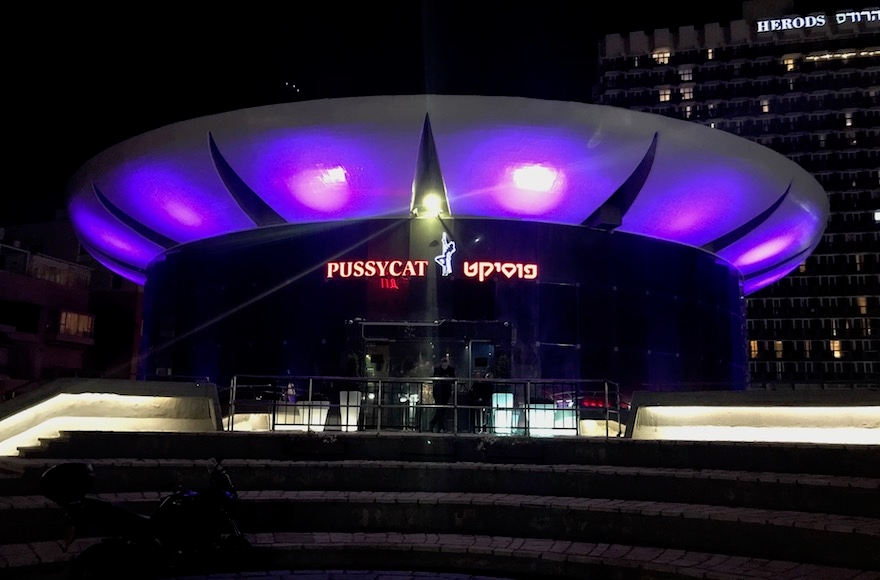 Whether or not that happens, pole dancing is experiencing increased legitimacy in the Jewish state.

Nofar Partosh, a 25-year-old law student at Tel Aviv University, says pole dancing has become a lot more socially acceptable, allowing her to be more public about her hobby — at least partially.

“There are tons of studios these days, and you see stories all the time on TV or in the newspaper,” she said. “I still don’t discuss it at school or work, just because those are more formal places. But my friends know, and my dad talks about it openly with me now.”

But for pole dance to truly be taken seriously and reach its full potential, Rodrigues thinks it needs to shun the kind of eroticism on display at strip clubs — which are ubiquitous but increasingly criticized in Israel.

“I don’t want to see my girls on high heels touching their boobs,” he said. “That’s the stereotype we need to get away from — that this is something for gay men and easy women.”

Yet even among its most avid followers, not everyone agrees with Rodrigues’ vision for the future of Israeli pole dancing.

Neta Lee Levy, 37, who in 2009 opened the country’s first studio in Tel Aviv, teaches a variety of styles at her two Funky Pole Dance Goddess Israel locations. Among them is exotic pole dance, which borrows moves from strip clubs, though not the nudity. Levy says she used to be a vocal advocate for pole dance to be considered a sport, but has recently found herself pushing in the other direction.

“I’m actually going a little back and saying, yes, it’s a sport, but it’s not just a sport,” she said. “It’s also a form of art and fitness and community and a way to be sexy.” 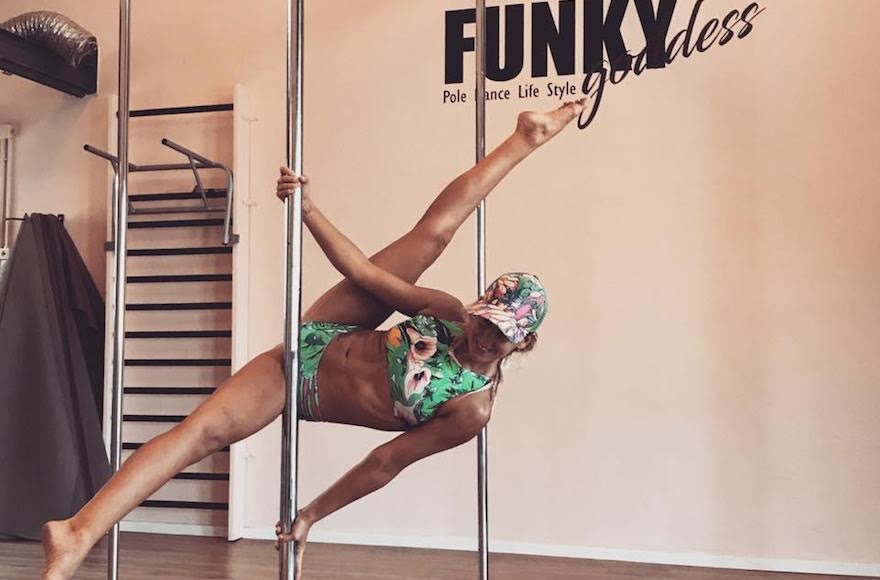 In 2013, Ayelet Finkelstein, 30, the daughter of a religious Zionist rabbi, opened a women-only studio in Jerusalem that teaches exotic pole dance. Many of her students are Orthodox women and girls, she says.

Although she says she turns away women who identify themselves as strippers, Finkelstein sees sexuality as an essential part of pole dance’s appeal and power.

“I think it’s wonderful that pole dance is becoming so athletic and that it’s probably going to end up in the Olympics,” she said. “To disconnect it completely from strip clubs I agree with. But I think it’s also fun that it’s sexy. Women connect and relate to that.”

Rodrigues acknowledges his “sporty not sexy” viewpoint may also be informed by old-fashioned values, as odd as that may seem. Born and raised strictly Catholic in South Africa, he studied at the Chabad House in Johannesburg and now identifies as Jewish. Israel’s haredi Orthodox-dominated Chief Rabbinate has thus far refused to convert him, which would entitle him to citizenship, but this year he was granted a work visa in recognition of his contributions to pole dancing in Israel.

“I feel like I’ve built something great here,” he said. “I just want to stick around to see it through.”