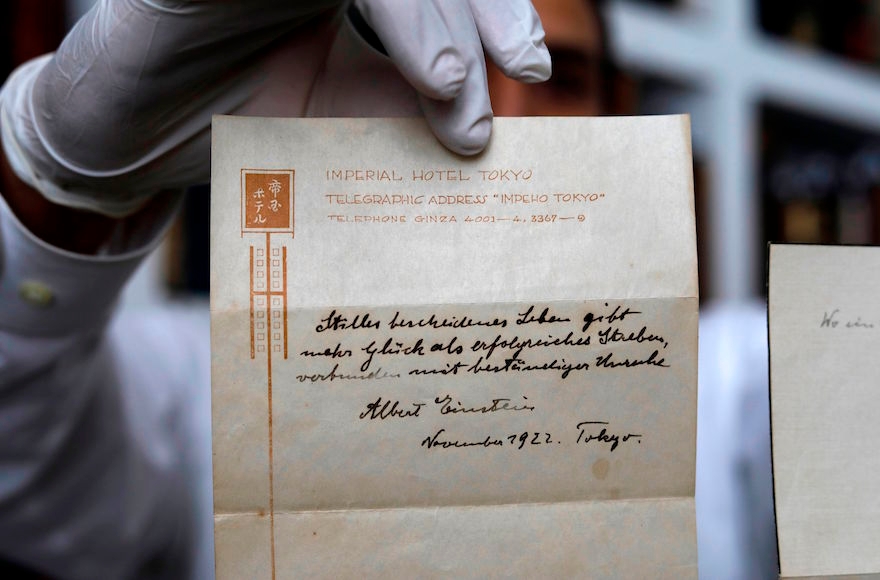 one of two notes written by Albert Einstein, in 1922, on hotel stationary from the Imperial Hotel in Tokyo Japan. A note that Albert Einstein gave to a courier in Tokyo, briefly describing his theory on happy living, has surfaced after 95 years and is up for auction in Jerusalem. / AFP PHOTO / MENAHEM KAHANA (Photo credit should read MENAHEM KAHANA/AFP/Getty Images)
Advertisement

(JTA) — A handwritten note in German by Albert Einstein for a Japanese deliveryman was sold at auction for $1.56 million.

The signed note was written in 1922, shortly after Einstein won the Nobel Prize for Physics, on the stationery of the Imperial Hotel Tokyo. It reads: “A calm and humble life will bring more happiness than the pursuit of success and the constant restlessness that comes with it.”

Both letters, purchased by the same person, were auctioned off Tuesday at the Winner’s in Jerusalem.

The letters had been expected to sell for up to $8,000 and $6,000, respectively. The buyer asked to remain anonymous, according to reports.

Reports say that Einstein did not have any small change with which to tip the courier, or that the courier refused to accept money, so instead he gave him the notes.

The seller reportedly is the nephew of the courier, who lives in Germany.

Einstein traveled and lectured throughout Japan for six weeks in 1922.