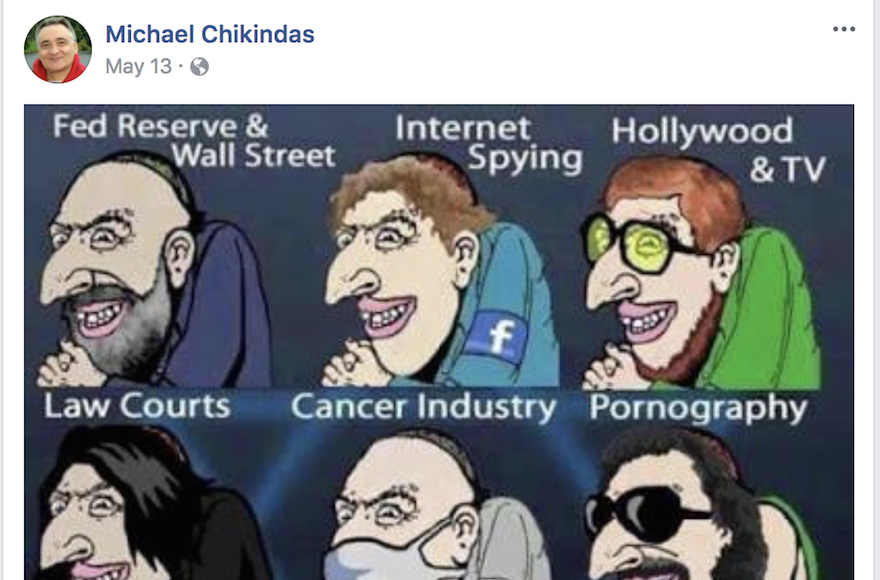 (JTA) — Rutgers University is reviewing the anti-Semitic and anti-Israel social media posts of one a professor who called Judaism “the most racist religion in the world.”

As of Wednesday morning the Facebook page of Michael Chikindas, a microbiology professor in the food science department and director of the Rutgers Center for Digestive Health, had been taken down. But some of the posts remain in screenshot form on the Israellycool blog, which first reported the posts, and on the website of the Algemeiner news site, which reported extensively on the posts on Tuesday.

The posts include caricatures of hook-nosed Jews; canards that the Jews control Hollywood, the Federal Reserve and the government; and that Israel is committing genocide and is a “terrorist country.”

Chikindas blamed the Armenian genocide on Jewish Turks and republished claims that American Jews and Israel were responsible for the 9/11 attacks, among other anti-Semitic claims.

In an interview with the Algemeiner, Chikindas rejected accusations of anti-Semitism, saying he was previously married to a Jewish woman and is one-quarter Jewish. He also said he does not believe any of his postings violate Facebook policies.

Neal Buccino, a spokesman for Rutgers, told the Algemeiner in a statement that “Professor Michael Chikindas’ comments and posts on social media are antithetical to our university’s principles and values of respect for people of all backgrounds, including, among other groups, our large and vibrant Jewish community. Such comments do not represent the position of the University.”

“The university is reviewing this matter to determine if actions taken in the context of his role as a faculty member at Rutgers may have violated that policy.”

Rutgers, the biggest state university in New Jersey, has among the largest Jewish student populations of any U.S. university.