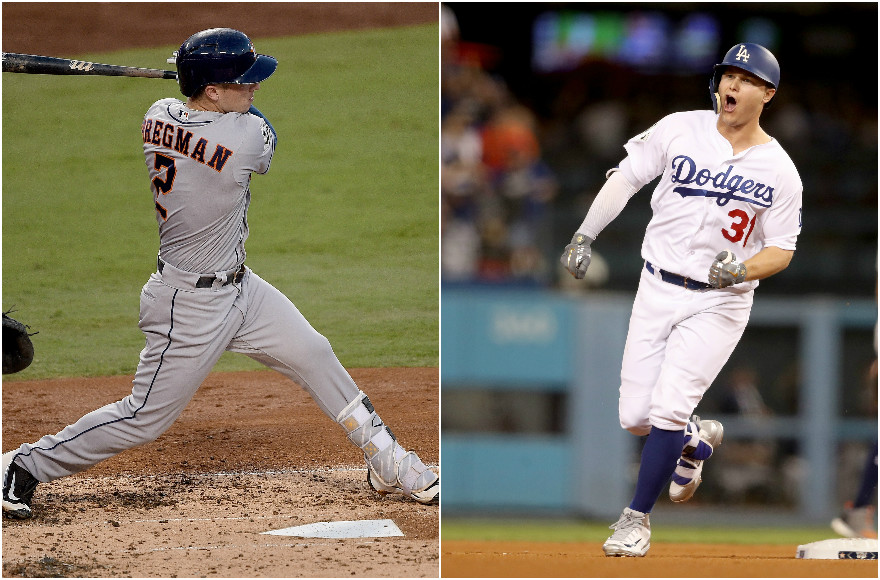 (JTA) — You wanna see Jewish power, forget AIPAC: It’s been on display in the first two games of the World Series.

Joc Pederson of the Los Angeles Dodgers and Alex Bregman of the Houston Astros have each homered in the series, becoming the first Jewish players to go deep for opposing teams in the Fall Classic.

Pederson, a lefty-swinging outfielder, pulled the Dodgers into a 1-1 tie in Game 2 on Wednesday night with his solo blast off the star right-hander Justin Verlander. Los Angeles would go on to lose, 7-6, in 11 innings. Pederson was out of the game by then, having been pulled in a double switch a few innings earlier.

The Astros’ Bregman, a third baseman who bats right-handed, likewise sent Game 1 into a 1-1 deadlock on Tuesday night with a bases-empty shot off Dodger ace Clayton Kershaw. It was all Houston could muster in a 3-1 loss.

While Bregman didn’t homer in his club’s Game 2 victory, he was a vital cog, knocking in one run with a double and igniting an eighth-inning rally with another double and scoring as the Astros pulled to within one run. The American League champions would tie the score in the ninth before winning two innings later.

Both came to the majors as much-heralded prospects.

Bregman, 23, was the top draft pick of the Astros in 2015 and the second overall pick that year. In his first full campaign, he had 19 homers and 71 runs batted in and appears to be ready for the stardom observers predicted.

The 25-year-old Pederson, whose father, Stu, pitched for the Dodgers, put up some prodigious power numbers in the minor leagues and made the National All-Star team in 2015, his rookie year. After slamming 51 homers in his first two seasons, he struggled this year with just 11.

Their power surge makes them only the third and fourth Jewish players to homer in the World Series, according to Ron Kaplan, who writes the Kaplan’s Korner sports blog.

According to Kaplan, the only other members of the select group are Ken Holtzman, an Oakland A’s pitcher, who hit an improbable homer in 1974, and Hall of Fame slugger Hank Greenberg of the Detroit Tigers, who accomplished the feat five times in the 1930s and ’40s.

Meanwhile, Dodger legend Sandy Koufax is still contributing to his old club. The Hall of Fame lefty, who famously sat out a World Series game because it was Yom Kippur, was on hand at Dodger Stadium to congratulate his old team after Game 1. And it was Koufax who suggested to third baseman Justin Turner that he wear the same spikes in the Series that he wore throughout the National League Championship Series, when he and teammate Chris Taylor shared the series’ Most Valuable Player award as L.A. put down the defending champion Chicago Cubs four games to one.

Of course, Turner heeded the advice: Who doesn’t listen to Koufax? Turner went on to blast the two-run homer that sent the Dodgers to their Game 1 victory.

As Mars Blackmon used to say, “It’s gotta be the shoes.”