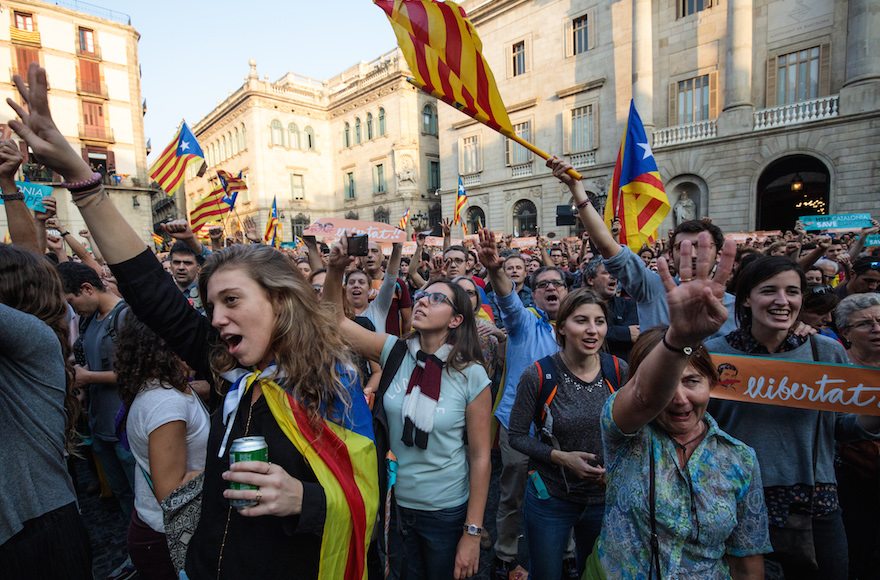 (JTA) — Breaking with its policy of neutrality on Catalan independence, the main umbrella group of Spanish Jews blamed separatists for the kingdom’s crisis and declared allegiance to the constitution.

The Federation of Jewish Communities in Spain, or FCJE, did this in a statement Friday, released hours after Catalan lawmakers voted to declare independence from Spain, as Madrid vowed in turn to “restore legality” and quash the region’s secessionist bid.

Expressing “deep concern over the grave national crisis,” the federation stated this crisis was “caused by the unilateral declaration of independence” of the regional government of Catalonia through its parliament.

”As Spanish Jews we wholly support the Spanish Constitution, the rule of law as applied in accordance with the law, solidarity and equality between all Spanish people and the unity of Spain,” read the statement. Authorities will “restore normalcy in Catalonia,” continued the anti-secessionist statement, along with “fraternity and peaceful coexistence as Spanish citizens.”

The Madrid-based federation’s statement notwithstanding, the Jews of Catalonia, who, according to the European Jewish Congress make up a third of Spain’s total Jewish population of 45,000, are deeply divided on the issue of independence, according to Victor Sorenssen, the leader of the Jewish community of Barcelona, which is the capital of Catalonia. “This is a political matter that doesn’t directly concern Judaism, so the community has no position on it as such,” Sorenssen said earlier this month of the  organization representing Barcelona’s Jews.

Jews of Catalonia, an anti-secessionist group, on Friday lauded the Madrid-based federation for its “important” message, as they called it on Twitter.

“The only representative organ of Jews in all of Spain has some out in favor of unity and against separatism,” the tweet read. “Kol HaKavod FCJE! The separatists represent only themselves.”

But a spokesperson for the pro-independence group “Jews for Independence” told JTA the FCJE does not represents the various opinions of Jews in Catalonia and elsewhere in Spain on this issue.

“We welcome the birth of our Catalonian Republic. It is no longer a dream,” the spokesperson said.

The motion declaring independence was approved with 70 votes in favor, 10 against and two abstentions, a result that caused Spanish shares and stock to fall sharply internationally, the Agence-Presse France reported.

Shortly before the Catalan vote, Spanish Prime Minister Mariano Rajoy urged lawmakers in the federal parliament to give him the power to dismiss Catalonia’s secessionist leader Carles Puigdemont, his deputy and all regional ministers.

If approved, the measures under Article 155 of the constitution, designed to rein in rebels among Spain’s 17 regions, would enter into force on Saturday.