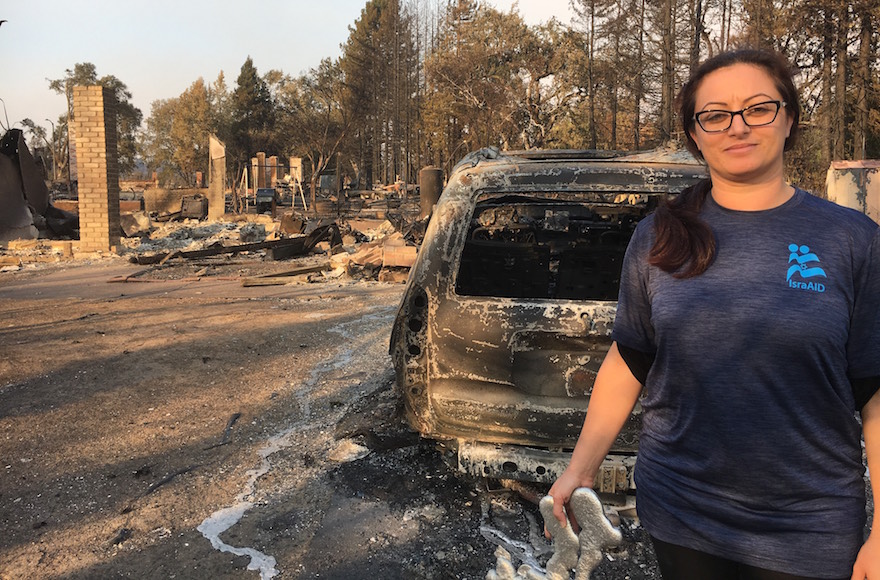 WASHINGTON (JTA) — For 17 years, the Israeli NGO IsraAID has been performing search and rescue, purifying water, providing emergency medical assistance and walking victims of trauma back to psychological health in dozens of disaster-hit countries.

But no season has been busier than this past summer and fall, its co-CEO Yotam Polizer said in an interview — and nowhere more than in the United States.

“The last few months have been unbelievable,” he said, listing a succession of disasters that occupied local staff and volunteers since August: Hurricane Harvey in Texas, Hurricane Irma in Florida, Hurricane Maria in Puerto Rico and then the wildfires in northern California.

Polizer recalls that he was wrapping up a visit to IsraAID’s new American headquarters in Palo Alto on Oct. 8 and was on his way to a flight to Mexico to oversee operations after a devastating earthquake there when he got word of the wildfires. “I literally had to do a U-turn,” he said this week in an interview at the Israeli embassy in Washington.

Polizer spoke with the exhilaration of an executive whose team has come through a daunting challenge. “We’re the people who stay past the ‘aid festival,'” he said, grinning, describing the month after a disaster when media attention and donations are at their highest; both tend to disappear after that period.

He anticipated his teams would stay in Houston for another three months and in Puerto Rico for another year. An IsraAID team remains in Haiti eight years after a devastating earthquake hit that country.

The assistance IsraAID administered in the United States over the last two months is emblematic of the added Israeli value it brings to disaster relief across the globe:

–In Houston and in nearby Beaumont, Texas, its team supervised and participated in cleaning debris and strategic house demolition, a skill derived from the clean-up Israeli authorities administer after wartime attacks on Israeli communities;

–In Puerto Rico, the teams administered emergency medical care honed in post-attack scenarios, as well as training in water filtration cultivated in a country where fresh water is scarce;

–In Santa Rosa, California, a social worker with the team led post-trauma care — a hard-won specialty in Israel — for families who lost their homes in the fires. 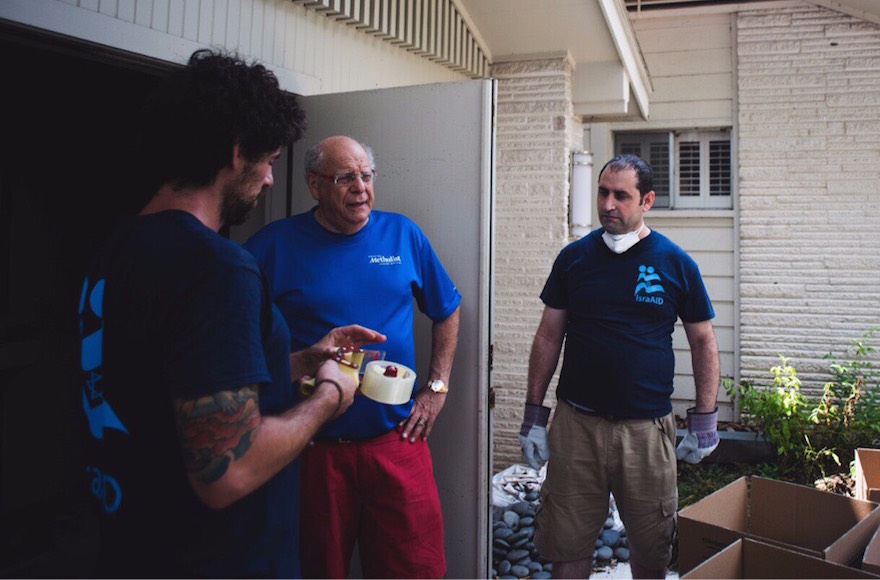 Haider Elias, right, of the Yazda group, working with IsraAID in Houston after Hurricane Harvey. (Courtesy of IsraAID)

There are other, less tangible skills, associated with the Israeli experience that Polizer described. For example, Israel’s diverse immigrant base offers language skills: Polizer was able to immediately deploy Spanish speakers to Puerto Rico.

He boasts of an Israeli propensity to cut through bureaucracy when needed — “the Israeli manner,” he calls it. Almost as soon as Houston was hit, the Israeli embassy in Washington was organizing truckloads of relief for the area.

IsraAID volunteers often act as coordinators, a skill cultivated in a country where teenagers are thrust into leadership positions in the army.

“The biggest challenge is how you coordinate and communicate, how you identify what are the gaps in the response,” Polizer said.

One of IsraAID’s U.S. partners is Team Rubicon, an organization of military vets that deploys to disasters. In Houston, the Rubicon-IsraAID proportion was typical of the relationship, he said: The Americans deployed about 2,000 volunteers, while there were seven Israelis. IsraAID relies on a bank of 1,400 volunteers and 270 staff it rotates in and out of afflicted areas.

Polizer — to his own surprise — ended up tapping another non-Israeli team of volunteers in Houston: members of the Yazidi religious minority in Iraq who had sought refuge from deadly persecution at home.

The first call Polizer made after hearing Harvey hit was to Haider Elias, a Yazidi leader who had worked with IsraAID in advocating for greater assistance for Yazidis fleeing from areas controlled by the Islamic State. IsraAID had administered post-trauma counseling to Yazidi refugees.

Polizer called only because he wanted to know his Houston-based friend was okay. As it happens, the Yazidis in Houston mostly live on higher land — but Elias had heard that the Jewish community was hard hit, and saw an opportunity to return the favor. He called around and found another half-dozen Yazidis ready to deploy.

“I went with a truck, I put our logo on it, ‘Yazda’,” he said, referring to the Yazidi advocacy group he heads. The team wore the IsraAID t-shirts. “I met with Yotam in Greece,” where the Israeli organization was assisting Yazidis. “He was doing a great job.” Elias has since visited Israel to lobby the Knesset to recognize the massacres of Yazidis as a genocide, and has toured Yad Vashem, its Holocaust memorial.

IsraAID’s first crisis point is often a disaster area’s Jewish community, if it is afflicted. It then moves onto other communities. Elias and his team remained in Houston, assisting in debris-clearing and demolition, while the IsraAID team continued to Beaumont, Texas where it remains. 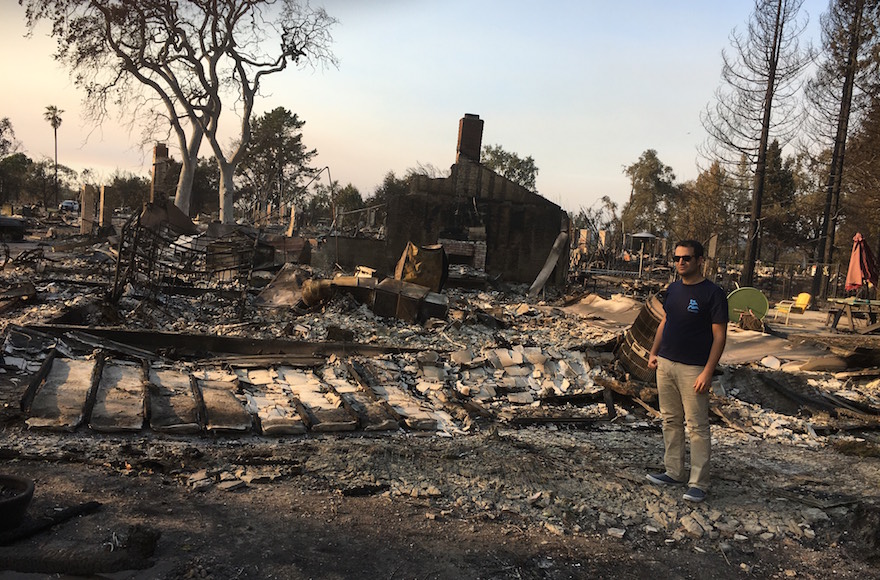 Connecting with Diaspora Jewish communities has become a central part of the IsraAID ethos, Polizer said, noting a program it now runs that deploys young American Jewish volunteers to assist in disaster areas. This year, there were 120 applicants for 14 fellowships.

“We’ve seen a lot of people change their perspective, even here in the United States. For younger Jewish people asking questions about their identity, we see this work really resonates,” he said. “We get large numbers of volunteers from the Jewish community” when IsraAID comes into a disaster zone, he said.

The fellowships are funded by the San Francisco-based Koret Foundation, which also is funding IsraAID’s new Palo Alto office, and seed money that allows IsraAID to deploy teams quickly while raising money elsewhere for the longer term. (IsraAID’s $9 million annual budget comes from foundations and private donors. Unusual for an Israeli group, 30 percent comes from the United Nations.)

In Santa Rosa, 30 Jewish families were evacuated and one community member died as a result of the fires. Polizer called one of the professionals IsraAID keeps on tab, Niveen Rizkalla, a social worker who is in a post-doctoral program at the University of California-Berkeley.

“In the first week when people are overwhelmed, you just want to listen and be there for them,” said Rizkalla, a Palestinian citizen of Israel originally from Ramle. “People who saw me on the first day saw me on the second day, on the third day — the consistency of me being there helped them feel safe.”

In subsequent weeks, the strategy was to preoccupy the families, who may need to talk less and act more as a means of processing the trauma, she said. Additionally, the evacuation center — set up at the Congregation Shomrei Torah Reform synagogue in the town — served as a care center for children while parents traversed the bureaucratic slog of seeking insurance information.

Rizkalla said it was a skill that came naturally to someone steeped in the tensions of the region. In Haifa, she had directed the city’s crisis center, working with survivors of sexual violence, and before that she was a facilitator at Neve Shalom, the Jewish-Arab village in Israel that promotes dialogue.

“I was facilitating groups of Palestinian and Jewish Israelis, and sometimes Germans were added into this conflict,” she said, chuckling. “I developed tolerance and understanding of what is involved in a conflict situation.”