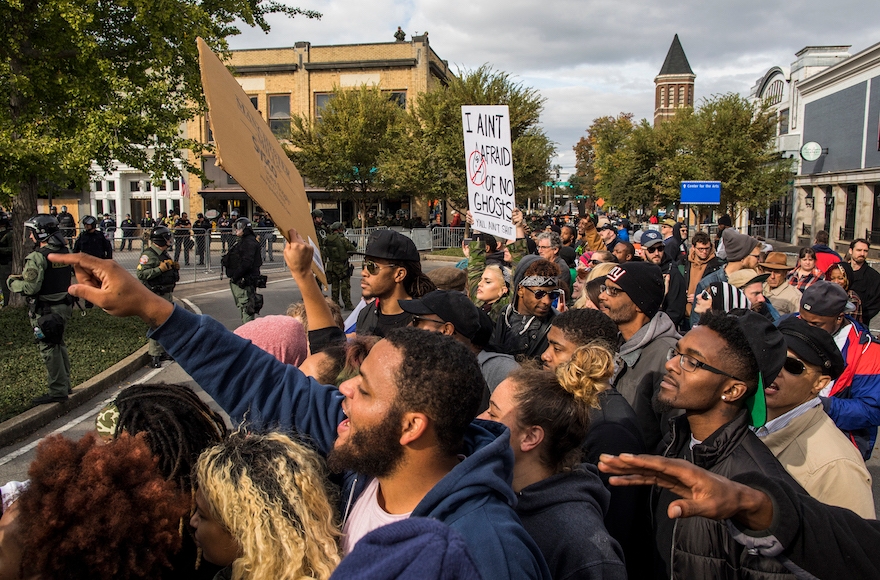 (JTA) — About 100 white supremacists and neo-Nazis gathered in a central Tennessee town for a “White Lives Matter” rally.

It was the largest gathering of white supremacists since the Unite the Right rally in Charlottesville, Virginia, in August, which left one counterprotester dead.

The rally in Shelbyville, Tennessee Saturday morning was met by hundreds of counterprotesters, and by a large police presence.

One demonstrator was arrested at the rally, which ended by 1 p.m. Demonstrators had to pass through two police checkpoints to get through to the town square designated for the rally. Among other items, they were prevented from bringing guns and masks with them, CBS News reported.

Mike Tubbs, a former Green Beret who spent time in prison for plans to bomb black and Jewish businesses and who was responsible for violence in Charlottesville, led the white supremacist protesters into their designated rally area. “I’m here to defend my heritage and my people against the forces of darkness,” he told The Huffington Post.

A second rally scheduled to be held Saturday afternoon in the larger college town of Murfreesboro, Tennessee, was canceled by organizers hours before it was scheduled to start. Among the reasons cited was the length of time it took to get through security in Shelbyville. Some 800-1,000 counterprotesters also had gathered in Mufreesboro, according to the local CBS station Newschannel 5.

The protests, organized by the white supremacist umbrella group The Nationalist Front, are meant to call attention to what extremist groups refer to as the “ongoing problem of refugee resettlement in Middle Tennessee,” and to bring attention to a shooting in a Tennessee church last month by a man, 25, who came to the Unites States as a child from Sudan, according to the Anti-Defamation League.