Comedian Gilbert Gottfried is lewd, crude — and really quite sweet 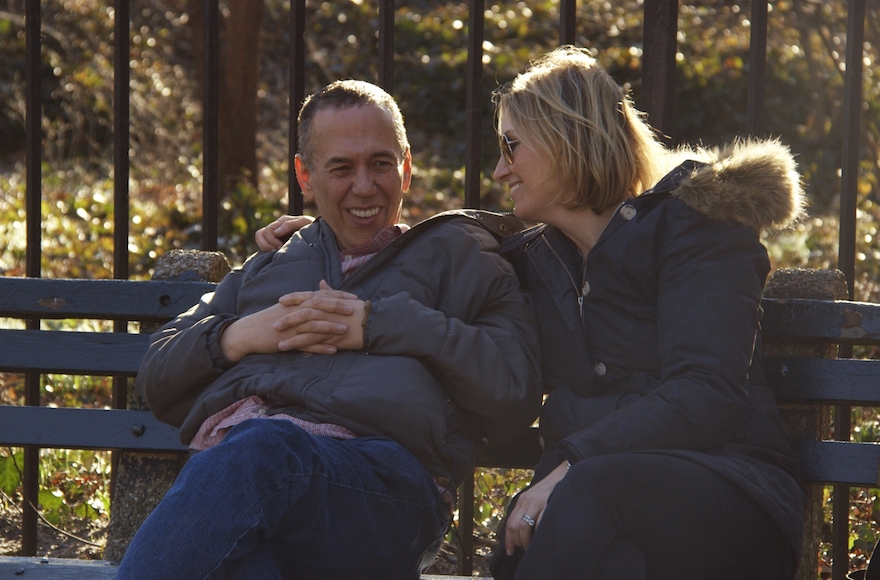 (JTA) — “It was very peculiar,” said Gilbert Gottfried, 62, about becoming the subject of the aptly named bio-documentary, “Gilbert.”

“The filmmaker, Neil Berkeley, came to me and said he’d always dreamed about making a Gilbert Gottfried documentary,” the comedian told JTA in a telephone interview. “I told him you should set your dreams higher.”

When they first met in October 2014, Gottfried was not enthused at the prospect of the film. He was concerned about what he called the “‘Wizard of Oz’ effect”— that pulling back the curtain might reveal someone who disappoints.

Still, he reluctantly agreed to the project. Or, perhaps more accurately, “I was too much of a wimp to say no,” he said.

“He just started following me,” Gottfried added. (Filming began in June 2015.) “He’d show up at my house, sometimes before I got up. He followed me on the road and after a while it just became accepted that he’d be there.”

The result? A revealing, fascinating film just may confirm Gottfried’s worst fear: In real life, the comedian, actor, voice-over artist and podcaster is clearly not an insensitive, flippant jokester with a famously grating, gravelly voice. Instead, Gottfried comes off as a sensitive, happily married man with two kids who lives a relatively normal, middle-class life in Manhattan. And while his neuroses comes through on occasion — and, hey, whose doesn’t? — viewers may be most surprised to hear that his “regular” voice is, well, pretty regular.

In “Gilbert,” we see the say-anything-for-a-laugh comedian sitting on a bench tenderly holding hands with his wife, Dara Kravitz. We see him taking his kids, Lilly and Max, to school and joining them on a museum trip. And possibly most poignant of all, we see him accompanying his sister, Arlene Gottfried — a celebrated New York street photographer — to her chemotherapy treatments. (She died in August at 66.)

The general consensus, as voiced by the comics interviewed in “Gilbert” — including Whoopi Goldberg and Bob Saget — is that much, if not all, of Gottfried’s transformation into a nice guy can be attributed to Kravitz.

The couple first met in the late 1990s; she created a sense of order in his life. “I actually live in an apartment where the furniture matches,” the longtime bachelor said. “And I have a collection of silverware and plates that go together.”

She’s also impacted his connection to Judaism.  Growing up, Gottfried said there was no Jewish education in his home — his link to his religion was one of mostly neuroses and worry. “The only time I’d be in a synagogue would be at someone else’s bar mitzvah or a funeral,” he said. “I didn’t reject Judaism, I was raised [in an unreligious] way. [But] I know that if we’re ever rounded up again, I’ll be on the train.”

Yet, at Kravitz’s insistence, when the couple married in 2007, they did so under a chuppah — one of the film’s charms is a clip from their wedding ceremony — and their two children attend Hebrew school. 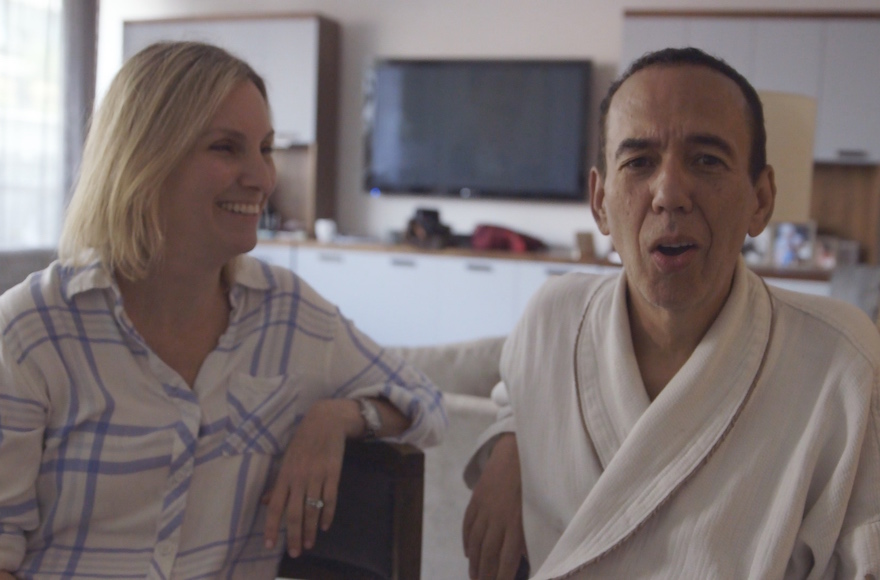 One thing she was unable to change is Gottfried’s periodic proclivity to get himself in trouble — like during the infamous Hugh Hefner roast which was held just weeks after September 11, 2001. In Gottfried’s notorious performance — also shown in the film — he dares to make a joke about the attacks. “There were still black clouds in the sky and I just wanted to be the first to address the elephant in the room,” Gottfried told JTA. “So I did a Sept. 11 joke.”

“I bombed horribly,” he added. “People were booing and hissing and chairs were scraping the floor. I lost the crowd as bad as I ever have. If you told me I was standing there for 200 years I would believe it.”

Did Gottfried hang his head and walk offstage? Not quite. “I figured I’m already in the bottom level of hell, so I did ‘The Aristocrats,'” he said, referring to notoriously lewd bit in which comedians, since the vaudeville era, have competed to see who could be the most crass. (The joke is so famous, in fact, that an entire film has been made about it.)

In this instance, it worked for Gottfried. “It was a complete turn-around,” he said. (In “The Aristocrats” film, comics sing his praises for doing the joke — calling him a “comic’s comic,” “brave” and “the man who made it possible to laugh again.”)

Gottfried found himself at the center of controversy again in 2011, he tweeted a series of jokes about the earthquake and tsunami in Japan, just days after the disaster. It cost him one of his most lucrative commercial deals, as the voice of the Aflac duck.

“I don’t regret the joke,” he said. “I regret losing the money.”

“If you’re a comedian, you can’t regret jokes,” he added. “It was interesting to me how people to me were making it more important than it really was. On television the newscasters said the story was about my ‘comments’ or ‘remarks.’ They never said it was a a joke, because they couldn’t do a story about jokes.”

But there’s a difference, I point out, between some improvised quip and a tweet, which is typed out and presumably read before it is sent out into the cosmos. “It’s something that had to be done,” he said. “Someone had to jump over the edge and show how dangerous Twitter is.”

By “dangerous” he refers to the often expletive-laden responses he sometimes gets to his tweets. “Twitter makes me feel sentimental for old-time lynch mobs,” he quipped. “The old mobs had to at least get their hands dirty. Now, all they do is sit on the couch in their underwear to form a mob.”

Clearly, Gottfried has few, if any, filters, and that shows in the film. I suggest others might have been more circumscribed with a camera following them — for example, the comedian comes across as extremely parsimonious. Actually, make that cheap.

He often travels to gigs on public transit — think Megabus — and takes on the attributes of a vacuum cleaner when he gets there, inhaling every freebie in every green room and hotel room he visits. If the stock in his home is any indication, every Gottfried family members can wash their hair three times a day for the rest of their lives and there would still be hotel-size shampoo bottles left over.

Gottfried attributes his thriftiness to his modest Brooklyn upbringing — thinking back, he said his home was a place where coupons were king and  brand names were banished. His father and uncle owned a hardware store on a very quiet  street. “I hardly remember any customers,” Gilbert said. “So there wasn’t a lot of money. The whole family lived in an apartment right above the store.”

And yet, Gottfried’s cheapness played a key role in meeting Kravitz, who was then in the music industry, at a Grammys party.  “I have no connection to the business but I knew there would be free food there,” he said. “We met and started talking.”

Several comics in the documentary point out their amazement that Gottfried landed such an attractive, intelligent and patient wife.

And, truth be told, it surprises him as well. “It’s one of the great mysteries, like who was Jack the Ripper and who was responsible for the Black Dahlia,” he concedes.

“Gilbert” opens Nov. 3 in New York, Nov. 10 in Los Angeles, with other cities to follow.