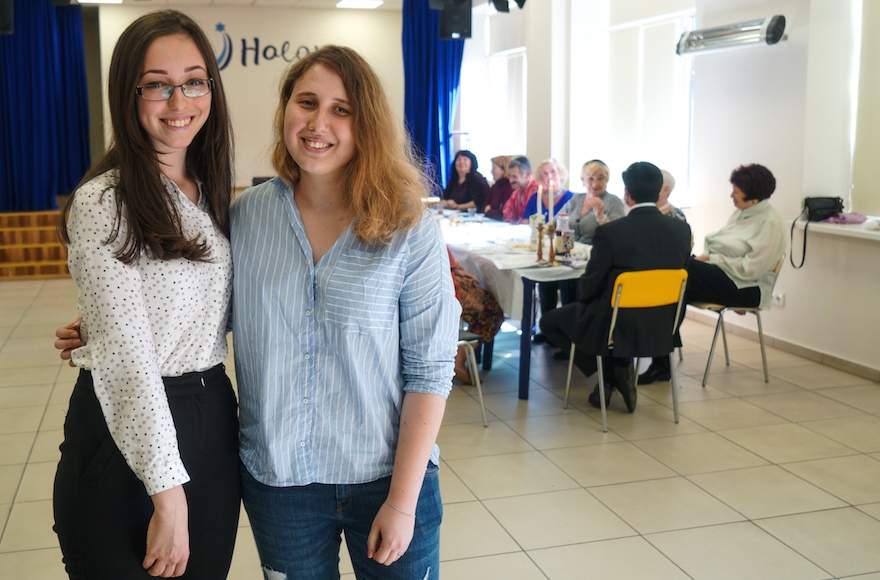 KIEV (JTA) — This city of 2.5 million residents may be the capital of one of the poorest countries in the Former Soviet Union, but it offers a dazzling selection of luxury services to those who can afford them.

On potholed streets where some elderly people are forced to rummage for food in dumpsters, well-heeled Ukrainians can enjoy dining at all-night sushi restaurants, shop at designer bag stores and ride around in 16-seat Hummer limousines.

Their children also get the VIP treatment at world-class childcare facilities like the Leleka kindergarten — a riverside mansion where the annual tuition easily surpasses the average annual salary of only $3,250. To regular Ukrainians, such Western-standard childcare is utterly unaffordable.

Unless, of course, they want to enroll their kids at the kindergarten of Kiev’s new Jewish Community Center, Halom — a 17,000-square-foot building that opened last year with funding from the American Jewish Joint Distribution Committee, or JDC.

Located in an accessible office district downtown, the Halom center, which has an annual budget of more than $500,000, features what is probably this city’s only subsidized “luxury” kindergarten, allowing working-class parents amenities that used to be the exclusive domain of this city’s wealthiest.

“I could never afford any other place like this,” said Anna Snitsruk, a working mother of two children. “This place is like a kindergarten for oligarchs,” she said, using a common name for Ukrainians who got rich after the fall of the USSR.  The preschool is part of Kiev’s first and only American-style JCC, which is also a rare spot for interactions by Jews of four generations.

The amenities at Halom, where parents pay the equivalent of $900-$1,900 annually depending on how many children they enroll and for how many hours, may appear rudimentary to Western eyes. But they are “incomparably better” than the local standard, Snitsruk said.

At Halom, which, in addition to the preschool also has entertainment and educational facilities for different age groups, a few dozen children aged 2-7 are divided into four age groups. Each class has a maximum of seven children and a designated teacher. 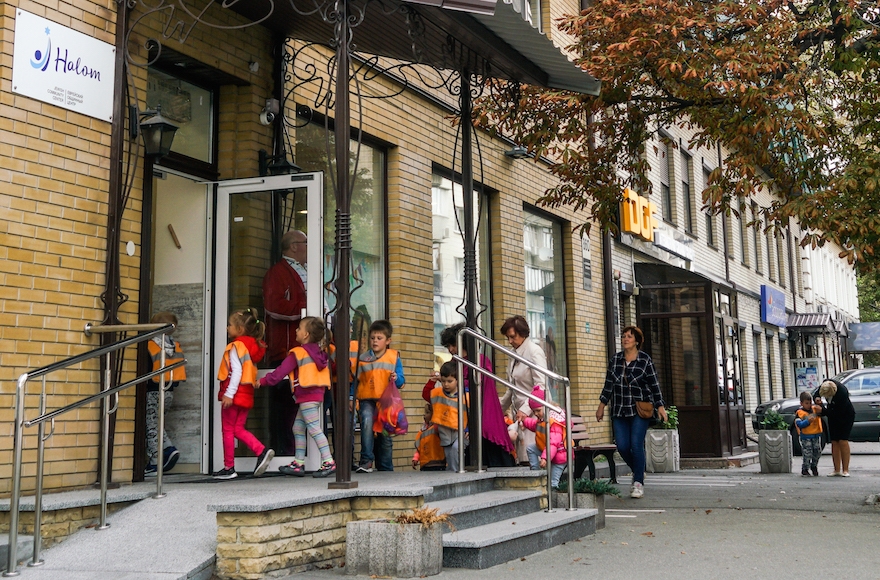 Located one story above the pastel-colored lobby, with its free coffee machine, the preschool is part of a hive of activity at Halom. Parents picking up their kids often stop to chat to elderly Jews gathering for candle lighting, and teenagers come to hang out after school at the center’s recreational room with its movie library and PlayStation 4 game console.

The building also has free wifi, conference rooms, computer stations and art displays, including an exhibition of hyper-realistic models of famous synagogues made from matchsticks by the well-known artist Iosif Ostashinsky.

A former teacher herself, Snitsruk opted to become a stay-at-home mom just to avoid sending her eldest, Lev, to a kindergarten “with one teacher per 20 children, where the food is not so great, where he would’ve gotten no attention and zero stimulation,” she said.

“I enrolled him right away” after Halom’s opening, she added. “I can see how he has developed emotionally. It’s a change that has affected our family profoundly.”

Even at a subsidized rate of $90 a month, tuition at Halom is making a dent in the household budget of Volodia Pasternak, a retired athlete and father of three whose youngest, four-year-old Maria, attends Halom.

“But I wouldn’t call it a sacrifice,” he said. “I’m so glad that I get to send her to a place that she actually likes. It’s because of the attention each child gets here. It’s not something I thought I could afford.”

Halom accepts all children regardless of whether they are Jewish, said Anna Bodnar, the 30-year-old director of Halom. Most recipients of Halom services do, however, self-identify as Jewish, she added. Kiev’s Jewish popualtion is estimated at 60,000.

Snitsruk, who is Jewish, said she is rather indifferent to the kindergarten’s religious dimension (the children learn about Jewish holidays and customs like candle lighting and challah baking).

Pasternak said he approved of such activities, but he too spoke of them as a secondary reason for enrolling his daughter there.

“I came here for the pedagogic approach and facilities,” he said — a sentiment that recalls those Jews, including immigrants from Ukraine, who enrolled at Jewish-run “settlement houses” in America in the early 20th century. JDC supports efforts that bring non-affiliated Jews into Jewish life, but also encourages mutual respect among Jews and non-Jews.

The opening of Halom (the name means “dream” in Hebrew) in November was a watershed moment for other age groups, too.

The center, which greets 1,000-2,000 users monthly, instantly became a hit with the golden age population. 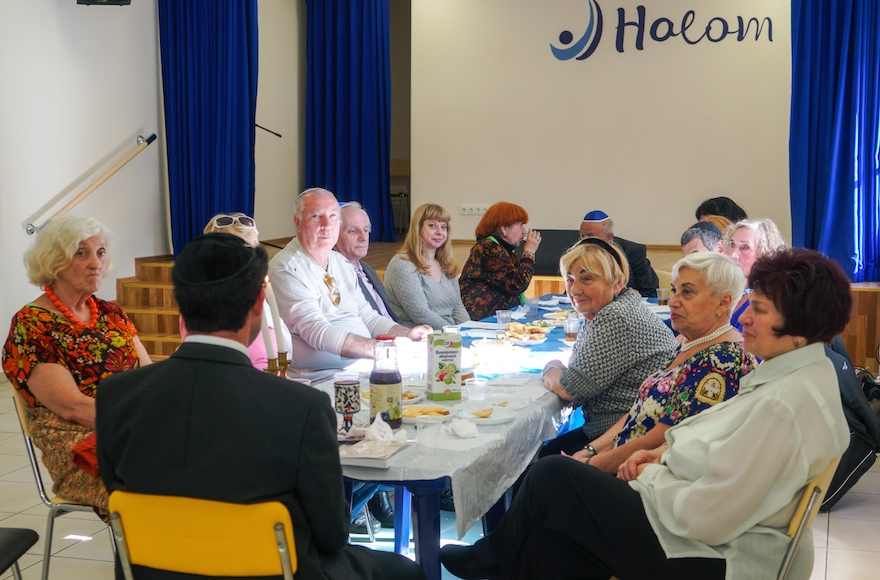 “I used to just stay at home all day, I didn’t go anywhere,” said Valentina Basova, a septuagenarian who lives alone since her son immigrated to Israel with his family four years ago.

“It’s great to also be around young people, Jewish children,” she added.

A regular at Halom, Basova comes nearly every day to participate in intergenerational programs in which elderly people are paired with children or teenagers to exchange skills. Elderly participants are taught to use computers and smartphones, and help youngsters with homework or teach them languages.

The exchange program, and its promise of sign language lessons, drew Adrianna Golubka, a non-Jewish Ukrainian and college student who became a volunteer last year. Her sign language teacher, a septuagenarian and Halom regular Irina Yosepavna, became an inspiration to Golubka in all areas of life.

“When I’m depressed or tired, I think of Irina, of how positive and energetic she is after leading a long and not so easy life, and I snap right out of it,” she told JTA last month.

Part of Halom’s charm, she says, is in amenities that few public spaces boast in Kiev, including the lobby, wi-fi, the free coffee and art displays. “It’s just very pleasant to come here, interact and relax,” Golubka said.

For the elderly users, Halom is also a promising dating scene.

The center has led to several successful shidduchs, or romantic matches. And last month, Halom celebrated the union of the first couple who married after meeting there: Maya Serebryanaya and Valeriy Utvenko, 68 and 72 respectively.

“Their relationship came as a surprise to me, actually,” said Bodnar, the JCC’s director. “I thought they were just friends.”