Netanyahu to appear via satellite at Jewish Federations’ General Assembly 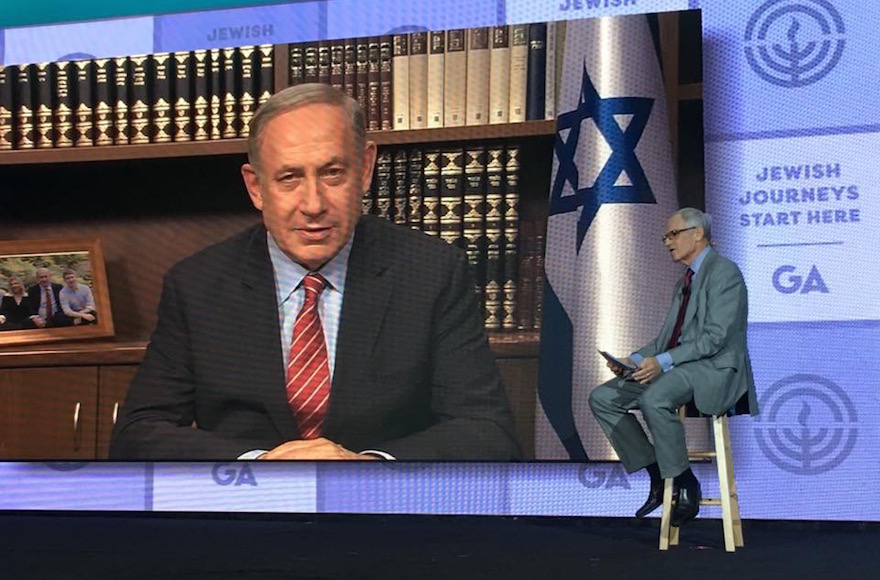 (JTA) — Prime Minister Benjamin Netanyahu will address the Jewish Federations of North America’s annual General Assembly next month via satellite on the last day of the conference.

Netanyahu will be interviewed live from Israel, as he was  last year. He appeared in person at the 2013 and 2015 General Assemblies and by satellite in 2014 and last year.

The General Assembly will be held in Los Angeles Nov. 12 to Nov. 14.

Reports last week said that an address by Netanyahu had not been confirmed, which was considered unusual that close to the event.

“We are thrilled to once again have Prime Minister Netanyahu with us at this year’s GA, as we have now for so many years running,” said Richard Sandler, chair of the Board of Trustees of the Jewish Federations of North America, in a statement.  “It’s a clear display of how important the relationship between Israel and the North American Jewish community is viewed by the Israeli government and by the prime minister himself.”

Tensions between Netanyahu and the U.S. Jewish community have sharpened in recent months in the wake of his freeze of a plan for an expanded egalitarian prayer section at the Western Wall, favored by the Reform and Conservative movements who claim a majority of affiliated North American Jews.

Israeli President Reuven Rivlin, who, prior to his presidency, had tense relations with non-Orthodox Jews, is scheduled to speak in person at the conference. Rivlin has endeavored to reach out to non-Orthodox streams since he assumed the presidency in 2014. His appearance at the General Assembly is the first time that Rivlin will speak to a major Jewish audience outside of Israel, according to JFNA.