4 Jewish things you need to know about Catalonia 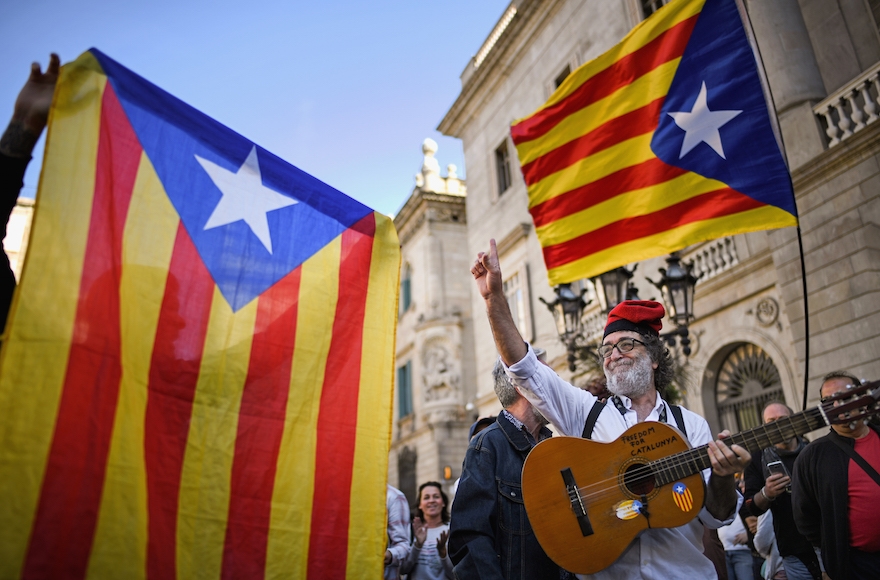 (JTA) — After simmering for decades, national aspirations in the region of Catalonia in northeast Spain plunged that country into a major crisis with far-reaching international implications.

The current crisis began earlier this month when federal police clashed with voters over an illegal referendum on independence. But it came to a head Friday, when the region’s parliament in Barcelona passed a motion declaring independence from Spain despite the federal government’s warning to desist.

Madrid dissolved the regional government in a bid to block secession. But the independence project appears to be more popular than ever now among Catalans — a distinct ethnic and cultural group whose language is closer to Portuguese than Spanish — now that separatists have come closer to independence than they had in centuries.

As Europe nervously studies this potential test case for nationalism and separatist projects across the continent, the developments in Catalonia are dividing Spaniards — including Jews. And because of Israel’s approach to it, the crisis is also underlining the Jewish state’s growing willingness to diverge with other Western countries on key foreign policy issues.

Here are four takeaways from the unfolding crisis in Catalonia.

With approximately 15,000 members, the Jewish community of Barcelona matches that of Madrid in size and prominence. Spain has a total of about 45,000 Jews, with the third not in the two major cities spread out across the country’s other 15 semi-autonomous regions.

In Barcelona, the issue of independence is divisive in general and in Jewish circles, leading the Jewish community there to adhere to a policy of neutrality.

“It’s a matter of ‘shalom bayit,'” Victor Sorenssen, the president of the community, told JTA earlier this month, using the Hebrew expression which means maintaining the peace at home.

The umbrella of Jewish communities of Spain, of which Barcelona is a member, also had a policy of neutrality, which it abandoned Friday when it came out in support of a unified Spain and against Catalan independence.

Historically, Catalonia was a major hub of Jewish settlement before the Inquisition of 1492. Prior to the expulsions that followed this Church-led campaign of religious persecution, a Jewish presence in Catalonia was first documented in 890 C.E. That’s more than a century before Jews were documented for the first time in Britain. But it is widely believed that Catalonia saw some of the very first Jewish settlers in Spain, who came there after the Romans destroyed the Second Temple in Jerusalem 2,000 years ago.

The town of Gerona, situated 50 miles north of Barcelona, was the undisputed capital of Jewish life in Catalonia and a hub of Jewish Sephardic learning. Moses ben Nahman, the 13th-century Jewish philosopher known as Nachmanides, was born and raised there.

Israel is on the fence.

Israel is among a handful of Western nations that have remained silent on the dispute. Madrid received public support against Barcelona from the European Union, the United States, Canada, Japan and Mexico, among other international players.

This divergence is part of a policy of nonalignment under Prime Minister Benjamin Netanyahu, who has remained neutral also on the Ukraine-Russia conflict, the civil war in Syria and on the vote in Britain to leave the European Union – all issues on which other Western countries have taken clear-cut positions.

Observers say the policy is designed to reduce friction with potential allies at a time when the United States — under President Donald Trump as well as his predecessor, Barack Obama — has appeared less insistent than in the past on its allies toeing its line.

But Israel has potential dividends to gain — and risks to run – depending on who it supports in the Catalan dispute.

Nonalignment gives Israel an ace up its sleeve. Spain is a generous financier of some organizations that are deemed anti-Israel and of others that are merely highly critical of Netanyahu’s policies in the conflict with the Palestinians. As long as Netanyahu remains noncommittal on Catalonia, he may leverage Israel’s position on the issue to influence Spanish policies on Israel.

The United States, which has a very large naval base in the southern Spanish city of Rota, is bound to support Spain, as is the European Union, in which Spain is a major member state. But Israel is unbound by such considerations and its neutrality may be a good beginning to a relationship with what could very well become Europe’s newest country within the foreseeable future.

Spain supports Palestine – but not unconditionally.

In the wake of the Catalan crisis, some supporters of Israel suggested that Spain is in no position to credibly object to Catalan unilateralism because of its own inconsistencies on this issue abroad — for example, when its federal congress unanimously voted in 2014 for a motion favoring Palestinian statehood.

Or as Washington Examiner columnist Michael Rubin put it in an op-ed from last week, “Spain gets what it deserves on Catalonia’s separatism.”

Yet as JTA reported at the time, unlike similar motions that passed that year in France and Britain, the Spanish motion stipulates that Spain will recognize an independent Palestinian state only if its creation is agreed upon in negotiations with Israel. This is essentially Israel’s policy on the issue, too.

Spain has also remained noncommittal on Western Sahara, a former colony of Spain that is currently under disputed Moroccan control, which some local groups seek to replace with an independent Western Sahara. In March, Spanish Foreign Minister Alfonso Dastis stopped short of supporting Saharawi independence, calling only for “a just political solution” to end the conflict there.

Catalonia supports Israel – up to a point.

Jewish and pro-Israel supporters of Catalan independence sometimes suggest that Israel is more popular in the region than elsewhere in Spain. Opponents underscore Spain’s own overtures toward Israel and partnership with it, including a recent judicial fight against anti-Semitism and discriminatory boycotts of Israel.

But neither argument is clear cut, according to Yigal Palmor, a former senior spokesman of the Israeli Foreign Ministry who has served in Spain.

Catalans have traditionally been more “open to Europe” than the rest of Spain, he said. Arguably, this European affinity has inoculated some Catalans to the medieval anti-Semitism that persists to this day in some parts of the country. In the country’s north, for example, some people say “kill a Jew” in toasting at traditional feasts.

“These phenomena disappeared in Europe but not in Spain, which has not had a large Jewish presence since the expulsion,” Palmor said.

But Catalans were less isolated from the rest of the continent than other regions in Spain, which spent much of the 20th century under the isolationist dictatorship of Francisco Franco.

This, and the Catalan longtime national aspirations, created an affinity to Zionism and Judaism in Catalonia, Palmor said, “where there traditionally has been a lot of respect for the kibbutz movement, the revival of the Hebrew language and Zionism generally across the political spectrum.”

But in the 1990s, he added, the Catalan left wing grew closer to its “anti-globalist, Third World-oriented” counterparts in Madrid, introducing the campaign to boycott Israel in a big way to Catalonia, Palmor said. At least five of the approximately 50 Spanish municipalities that declared their support for the boycott of Israel are in Catalonia.

Last year, a leader of a left-wing Catalan political party called a leader of the Jewish community, who is not Israeli and has no foreign nationality, “a foreign agent.” And earlier this year, the mayor of Barcelona ignored protests by Jewish groups over the hosting in her city of a Palestinian terrorist, Leila Khaled.