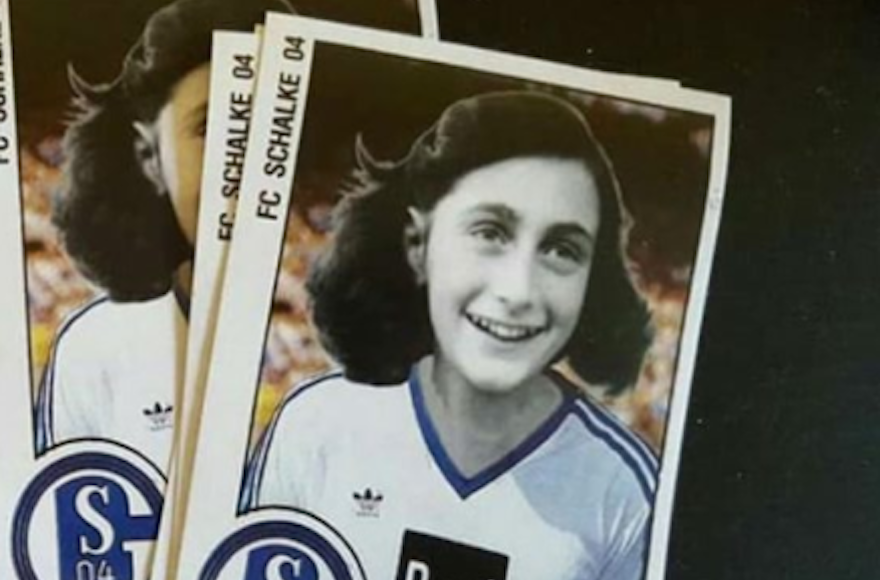 Fans of the Borussia Dortmund club are believed to have created the stickers showing the teenage Holocaust diarist in a Schalke team jersey. Borussia Dortmund reportedly has a number of neo-Nazis as part of its hardcore fan base.

Photos of the stickers were first posted on the German blog Ruhr Barone.de.

Stickers, allegedly from #BVB hooligan circles, have emerged in #Düsseldorf depicting Anne Frank in a #Schalke shirt. [via @ruhrbarone] pic.twitter.com/Q7m9LHT9aW

German police are investigating the incident, according to reports. Anti-Semitism is a crime in Germany, as is Holocaust denial.

Last week a passage from “The Diary of Anne Frank” was read out prior to all soccer games – youth games, amateur and professional —  throughout Italy after fans of the Lazio club posted stickers around Rome’s Olympic Stadium showing Anne Frank wearing the shirt of the Roma team. The teams share the stadium. Roma is often associated with being left wing and Jewish.

Also in response, Lazio President Claudio Lotito visited Rome’s main synagogue, where he laid a wreath of flowers in memory of Holocaust victims and condemned the actions of the fans. He also said the team would take 200 fans per year to visit Auschwitz.

However, after the synagogue visit, the Italian daily Il Messaggero released a recording of Lotito calling it a “charade.” Lotito denied it was his voice on the recording.

Soccer fans at two matches last week also ignored the “Diary of Anne Frank” readings. At a game between Roma and the Calabria-based Crotone, fans shouted team chants during the readings at the same stadium where the stickers were displayed. At a game between Lazio and Juventus, fans of the latter team turned their backs and sang the country’s national anthem during the reading.