Trump attacks an immigration program, and Schumer gets caught in the crossfire 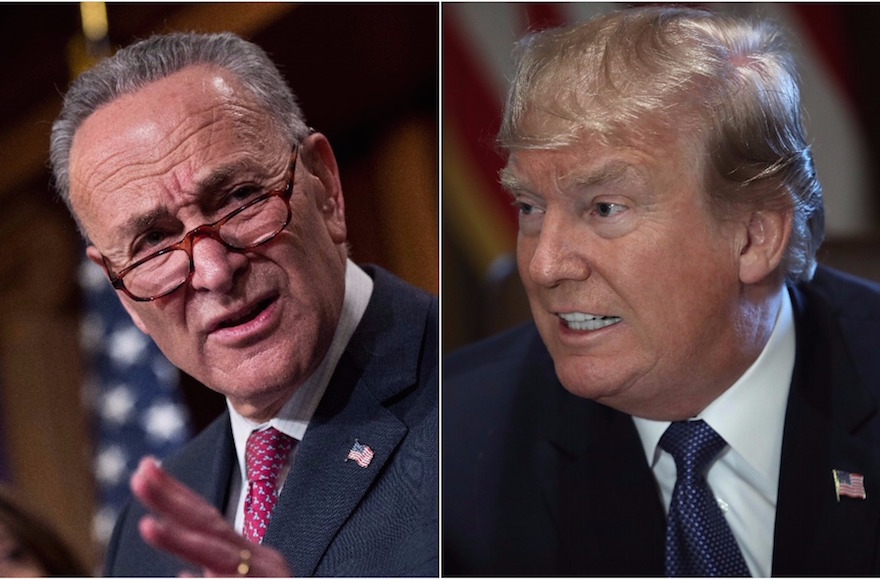 WASHINGTON (JTA) — Charles Schumer and Donald Trump like tweaking one another on a broad range of issues.

In October alone, the president chided the New York senator for wanting to preserve the Iran deal he once opposed, and the Jewish Democrat berated the president for not moving the U.S. Embassy to Jerusalem.

Standard stuff for two hard-charging New Yorkers from opposing parties. But even Schumer was taken aback Wednesday when Trump targeted the Senate minority leader for his long-ago involvement in setting up an immigration lottery — and tied it to the deadly terrorist attack the day before in New York City.

More than that, Trump’s sweeping condemnation of an immigration program in place since 1990 baffled not only Schumer, but also most Jewish immigration experts, who wondered what, if anything, the program had to do with the attack.

“This whole approach that anytime someone not from this country does something to harm Americans we look at the immigration system and think some adjustment is going to change [things], it doesn’t make sense,” said Melanie Nezer, the vice president of HIAS, the leading Jewish immigration advocacy group.

The latest contretemps was set off the morning after the truck ramming that killed eight and injured at least a dozen people in Lower Manhattan. On Twitter, Trump repeated an unsubstantiated report that the Uzbekistan citizen suspected in the attack had obtained a Green Card, or residency permit, in 2010 through the so-called Diversity Visa lottery program.

“The terrorist came into our country through what is called the ‘Diversity Visa Lottery Program,’ a Chuck Schumer beauty,” Trump tweeted about the suspect, Sayfullo Saipov. “I want merit based.”

An hour later, Schumer tweeted back.

“I guess it’s not too soon to politicize a tragedy,” Schumer wrote just past 7:30 a.m.

Schumer, who previously has enjoyed his sparring with the president, was taking this very personally. Speaking from the Senate floor later Wednesday, he blasted Trump for being divisive during a time of mourning.

By the afternoon, Trump was telling his Cabinet he wants to end the diversity lottery program.

“I’m going to ask Congress to immediately initiate work to get rid of this program,” he said. “Diversary and diversity lottery. Diversity lottery. Sounds nice. It’s not nice. It’s not good. It hasn’t been good. We’ve been against it. So we want to immediately work with Congress on the Diversity Lottery Program, on terminating it, getting rid of it.”

The program, launched in 1990 as part of broader bipartisan immigration reform sponsored by Schumer — who was then in the House of Representatives — and an array of others, allows in up to 50,000 people a year through lotteries. That’s a fraction of the estimated 1 million Green Cards issued each year by the United States.

It was meant to redress imbalances in U.S. immigration policy that allowed in masses of immigrants from some countries like Mexico and Canada while neglecting others. In fact, it was pitched at first as a program that would allow in more Irish immigrants. (Schumer, as a New York City congressman, answered to a substantial Irish-American constituency.) It eventually was expanded to include an array of countries, including Israel.

Applicants must have graduated high school and worked a minimum of two years. Those selected are vetted for criminal pasts and ties to terrorist groups.

Trump appears to have been reacting to Fox News commentators who decried the program, and to a former national security adviser, Sebastian Gorka, who blamed Schumer on Twitter the night before.

Until now, the program has not figured prominently in the immigration battles between Trump and his opponents. In fact, Schumer no longer favors it; he was one of the “Gang of Eight” Republican and Democratic senators who authored immigration reform that passed the Senate and was backed by President Barack Obama. That deal, killed in the House, rolled back the visa diversity program and instead promoted merit-based Green Cards — the very program Trump said on Wednesday that he favors.

Jewish groups have mostly objected to the Trump administration’s immigration policy. It includes plans to end a program for “dreamers,” immigrants who arrived here illegally as children; bids, frustrated until now by courts, to block travelers from between five and seven Muslim majority countries; and attempts to temporarily stop an intake of refugees.

The diversity lottery wasn’t even on the radar.

“As a matter of policy, we’ve been far more focused on family reunification as a principle of immigration reform,” said Richard Foltin, the director of legislative affairs for the American Jewish Committee.

Foltin said it made more sense to fund Homeland Security programs that prevented radicalization than to target the diversity visa lottery.

“We have to think in a much more logical way, to look for people within communities who are radicalized, and to fund the resources within our government to have a substantial domestic terrorism program,” he said.

Stosh Cotler, the CEO of Bend the Arc, a liberal group that champions the dreamers and has organized actions against Trump’s immigration policies, said the impetuous targeting of the diversity program by the president was of a piece with what she called his “white supremacist agenda.”

“We must always be aware how moments of fear and moments of genuine tragedy can be used to reinforce harmful stereotypes about scapegoated communities,” she said, “and this is what Trump is doing with his inappropriate comments.”

Cotler contrasted Trump’s rhetoric and action following the New York City terrorist attack with his relative sanguinity in August after a white supremacist allegedly rammed a crowd of counterprotesters in Charlottesville, Virginia, killing one. In that case, Trump blamed “both sides” for the violence and also said there were “very fine people” on both sides.

“Trump and his enablers have been aggressive to ensure we are maintaining policies that are xenophobic and Islamophobic,” she said. The suspect in the New York attack, Sayfullo Saipov, was heard shouting “God is great!” in Arabic before he was shot and subdued by police.

“President Trump, instead of politicizing and dividing America, which he always seems to do at times of national tragedy, should be focusing on the real solution — anti-terrorism funding — which he proposed cutting in his most recent budget,” he said in a statement.

Saipov, according to media accounts on Wednesday, appeared to have been radicalized after his arrival in the United States. He left a note identifying the attack with the Islamic State terrorist group, although New York Gov. Andrew Cuomo said Wednesday that investigators “have no evidence yet of associations or continuing plot or associated plots, and our only evidence to date is that this was an isolated incident that he himself performed.”

“We should look at radicalization and why it occurs,” said Nezer of HIAS. “It happens to people who are born here, people who come here as immigrants. It doesn’t really relate to immigration policies.”

She noted that Uzbekistan was never among the countries that Trump has targeted in his various executive orders on travel that he claims will stem terrorism.

Morton Klein, the president of the Zionist Organization of America, who has backed Trump’s immigration policies, said that on the face of it, looking at the immigration lottery made sense. On Wednesday, he tweeted a video of right-wing talk radio host Mark Levin saying the Diversity Immigrant Visa Program should be gutted.

“I don’t think America or any country should make decisions on who immigrates to their country based on randomness,” Klein said.