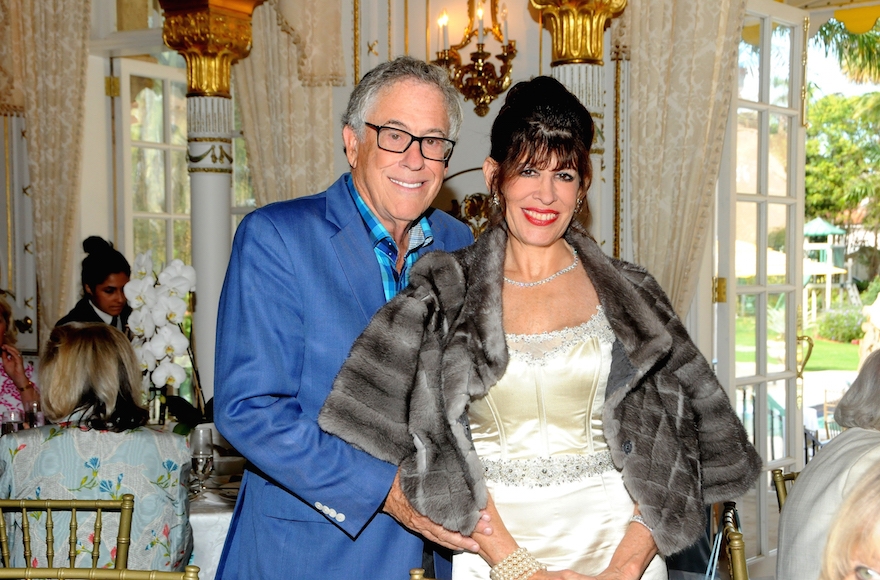 WASHINGTON (JTA) — President Donald Trump’s nominee for ambassador to the Dominican Republic was a fundraiser who helped him win Florida with her campaigning in the Jewish community.

And while Robin Bernstein has relevant political and government chops for the role, Tuesday’s announcement didn’t do her any favors: It noted that she “speaks French and basic Spanish.”

Ben Jacobs, a reporter for the Guardian, and others on Twitter thought it hilarious that an envoy to a Spanish-speaking country would only have “basic Spanish,” when in fact, with the exception of politically sensitive spots, ambassadors are typically prized for their closeness to a president and often lack the local language, or even experience of the designated country.

WH just announced a nominee to be Ambassador to the Dominican Republic whom they brag can speak "basic Spanish pic.twitter.com/7vNEwDBj21

In 2014, President Barack Obama nominated for the Buenos Aires post Noah Mamet, who did not speak Spanish and had never been to Argentina.

And the snark that greeted the announcement overlooked much of what makes Bernstein, an insurance executive in West Palm Beach, Florida, a much more interesting figure, in the Jewish community and beyond.

The company Bernstein founded with her husband, Richard S. Bernstein and Associates, has insured some of Trump’s businesses for years. At a 2009 event honoring Richard Bernstein held at Trump’s Mar-a-Lago club in Palm Beach, Trump was asked to praise the honoree. In the video of the event, Trump first teases him, saying that Bernstein will likely monetize the billionaire’s endorsement with TV ads. But then he adds, “I don’t care … He’s done a terrific job for the Trump organization, so we’re very happy with Richard and with Robin.” Robin Bernstein leans in for a hug.

… and that could be a problem.

Bernstein’s likely nomination to the Santo Domingo post was first reported on a local western Florida coast news site in February and immediately set off alarm bells. Rolling Stone noted an Associated Press report that just weeks after the inauguration, Trump’s sons, who had taken over their father’s real estate dealings, appeared to be breaking their pledge not to do international business.

The project? A resort in the Dominican Republic. (In their defense, Trump’s organization said the project predated the pledge, but it had collapsed in 2012 amid claims by the Trumps of fraud against the Dominican developer. Eric Trump was photographed touring the site on Feb. 5, after his dad’s inauguration.)

That would likely mean hard Senate confirmation hearing questions for Bernstein, Rolling Stone said: She had a business relationship with Trump, would she seek to curry favorable conditions for the resort deal?

“Will Trump’s new ambassador help the Trump family business solidify a new deal, even after Trump promised his companies wouldn’t pursue such deals at all while he’s in office?” was how the magazine put it.

She’s a founding member of Mar-a-Lago.

Bernstein was among the founding members of Mar-a-Lago. In a pre-election interview with “The Shalom Show,” a cable show with a pro-Israel bent produced in south Florida and broadcast nationally, she noted that the club was among the first in the area to allow Jews to become members — and said they are in the majority.

“Probably over 50 percent of his members, at least in Mar-a-Lago and Trump International [a local golf club], I don’t know about the other clubs, but I know they are Jewish,” she said.

Speaking to the Miami Herald immediately after the election, she likened Mar-a-Lago to Camelot, referring to John F. Kennedy’s presidency and the Kennedy compound in Hyannis Port, Massachusetts.

“It’s almost a return to Camelot,” Bernstein said. “I imagine that instead of hopping in the Trump plane, he’ll hop on Air Force One and come on down.” (She was right.)

“I know that he tried to have a kosher kitchen, it was voted down, but he tried to have a kosher kitchen for his members,” she said in the same interview. (She didn’t say which side she was on — if she was on a side. Her company referred requests for interviews to the State Department; a State Department spokesman said nominees do not speak to the media until they are confirmed by the Senate.)

Her first degree was from the American University’s School of International Service (her specialty was Russia), a breeding ground for diplomats. Instead of a State Department career, she went to work for Democrats — joining Henry “Scoop” Jackson’s presidential campaign (she doesn’t say which, in 1972 or 1976). Like many Jewish Democrats who gravitated around Jackson, a foreign policy hawk, she eventually moved toward the Republican Party — albeit after a stint in the Carter administration’s Commerce Department. Bernstein was one of the Florida electors who cast votes for Trump in the Electoral College.

… and can throw a political punch.

Bernstein was featured in a story by the local CBS affiliate on Jews who were backing Trump.

“This corruption that Hillary Clinton has committed, I think it’s treasonous,” Bernstein said, referring to stories that sought to link revelations in hacked Democratic Party emails to fundraising for the Clintons’ charitable foundation.

Her kids are close with Trump’s other daughter.

Just before the 2016 election, she boasted on “The Shalom Show,” “We had 800 people with Ivanka at a shul in Bar Harbor.”

Bernstein may have gotten Ivanka, Trump’s Jewish daughter, to speak at a synagogue, but it would seem the family is closer to Tiffany, the daughter of Trump’s second wife, Marla Maples, who has kept a low profile before and after her father’s election.

She suggested a dead man serve in the Trump Cabinet.

Toward the end of “The Shalom Show” interview, Bernstein runs through the people she believed Trump would name to his Cabinet, “phenomenal, phenomenal people that can guide this country.” She named Rudy Giuliani, the former New York mayor; New Jersey Gov. Chris Christie; then-Alabama Sen. Jeff Sessions and now the U.S. attorney general; and Vince Flynn.

Flynn, an author of thrillers who was popular among national security conservatives, has been dead since 2013.