What was the Jewish role in 1917 Russian Revolution? This Moscow museum gives a full picture. 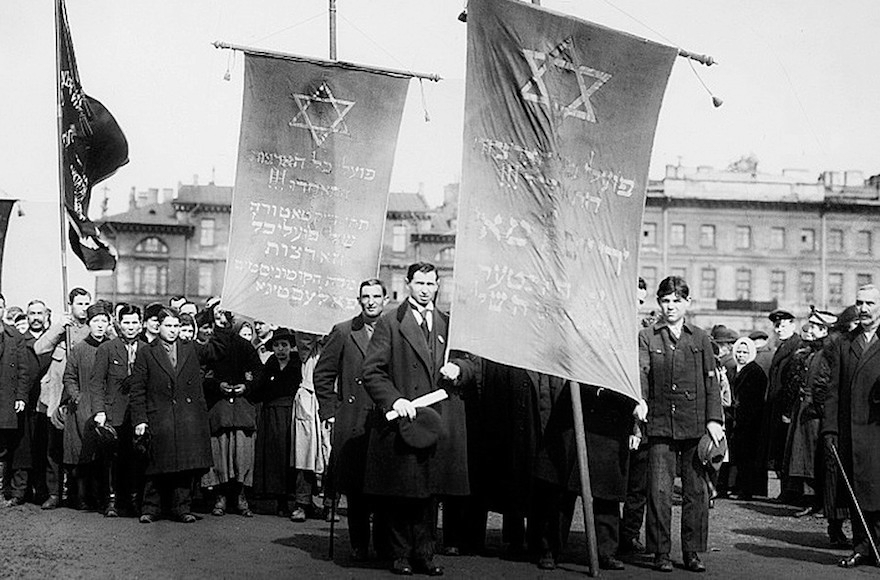 Jewish organizations during the May Day demonstration at Marsovo Pole in Petrograd, Russia, 1919. (Jewish Museum and Tolerance Center)
Advertisement

(JTA) — Of all the many loaded issues tied to the bloody history of Jews in the former Soviet Union, none is as sensitive today in that part of the world as their role in the 1917 revolution that brought the communists to power.

The outsized prevalence of Jews in the ranks of the revolution that broke out a century ago on Nov. 7 has remained a mainstay of anti-Semitic vitriol in the area.

During the Holocaust, it served as a pretext for the murder of countless Jews across Eastern Europe by self-proclaimed enemies of communism and Russia. And it’s still being used today to incite hatred against local Jews, including among devout Christians who were persecuted by the anti-religious Soviet authorities.

Living in religious societies that by and large feel victimized by communism or its effects, many Russian-speaking Jews and their leaders have either remained silent on communism or downplayed the Jews’ role in it.

It’s a logical strategy, given the rhetoric of senior politicians like Peter Tolstoy, the deputy speaker of the Russian parliament. At a January news conference, he blamed Jews with interfering in a plan to relocate a church in Saint Petersburg. Tolstoy said Jews use their positions in the media and government to continue the work of ancestors who “pulled down our churches” in 1917.

Or the anti-Semitic hate campaign leveled at a Jewish director, Alexei Uchitel, whose studio in the same city was firebombed in September, presumably for his unfavorable depiction in a feature film of Nicholas II, the czar whose reign the revolution ended.

Yet ahead of the centenary, Russia’s main Jewish museum – which since its opening in 2012 has tackled head-on the subject of revolutionary Jews in its permanent display — unveiled an exhibition that underlines unapologetically how and why Jews became central to the revolution.

“For many years, neither Jews nor the authorities wanted to open up the subject, which became the stuff of myths for the ultranationalists, neo-Nazis and other anti-Semites,” said Boruch Gorin, chairman of Moscow’s Jewish Museum and Tolerance Center. “But now the time has come to look at the facts.”

The facts emerge from hundreds of photographs, documents, propaganda leaflets and artworks that comprise the exhibition. It opened last month under the title “The History of One People During the Revolution.”

They bust some myths, including the fallacy repeated in 2013 by none other than President Vladimir Putin, who said at the museum that anti-Semitic persecution of Jews in the former Soviet Union occurred even though “the first Soviet government was 80-85 percent Jewish.” (In fact, it had one Jewish member — Leon Trotsky, founder of the Red Army). 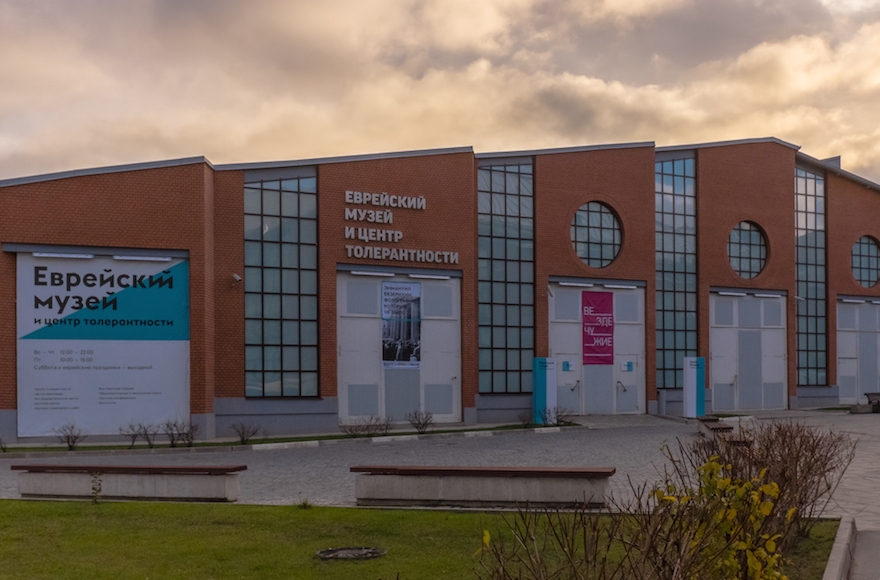 Moscow’s Jewish Museum and Tolerance Center, since its opening in 2012, has tackled the subject of Jewish revolutionaries. (Flickr Commons/Sergey Norin)

But the facts also reaffirm in essence assertions like the ones made by Mark Weber, a promoter of Holocaust denial. In 2003, he wrote, “Although officially Jews have never made up more than five percent of the country’s total population, they played a highly disproportionate and probably decisive role in the infant Bolshevik regime,” adding this was a “taboo” that many historians for decades preferred to ignore.

The Bolsheviks were members of the radical faction that ultimately dominated other streams in the communist revolutionary movement against the czar’s rule.

Among the items in the exhibition, which opened on Oct. 17, is a picture from 1918 of activists for the Socialist Poale Zion group flying a Hebrew-language banner in what today is Saint Petersburg.

Regardless of the exact makeup of the first Soviet government, “there was great and undeniable enthusiasm among basically all the elements that made up Russian Jewry during the revolution,” said Gorin, who runs the $50 million state-of-the-art museum that last year won an award from UNESCO for its promotion of tolerance.

Though the first Soviet government – the Council of People’s Commissars – was mostly non-Jewish, Jews did occupy very prominent positions throughout the Bolshevik and communist chains of command vastly disproportionate to their percentage of the general population, Gorin confirmed.

“The observant Jews thought in 1917 that the communists would allow them to extend Jewish life, the Zionists thought the revolution would advance their goals and there was a feeling of liberation,” Gorin said.

But it’s not like Russian Jews ever really had a choice.

Gorin says the exhibit “tells honestly and openly of how Jews did have an outsized role in the revolution. But it also shows that there were very good reasons for this.”

Similarly, were it not for the adoption of anti-Semitism by the Whites – the enemies of the communist Reds — “many Jews may well have made cause with the Whites, who were not all monarchists but included also democrats,” Gorin hypothesized.

Among the more evocative displays in the permanent exhibition is a video based on contemporary testimonies recounting the story of a Jewish man and his son who were captured by the monarchists. The man volunteered to confess to spying for the Bolsheviks if the monarchists spared the son’s life. Both were hanged after the confession in what today is Ukraine.

“The revolution offered Russia’s Jews many opportunities, equal rights and education and a chance to fill the vacuum left by an elite that was forced into exile,” Gorin said. “But above all it was a haven from a wave of pogroms in which 150,000 Jews in present-day Ukraine were murdered in what some historians call a dress rehearsal for the Holocaust. A Jew in 1917 had two choices: revolution or exile.”

During the Holocaust, the alignment of many Jews with the communist cause was cited as justification for wholesale slaughter by collaborators with the Germans. They resented not only communism but Russian domination in countries across Eastern and Central Europe.

The Jewish role in communism is used by anti-Semites to justify the Holocaust.

Zsolt Bayer, a co-founder of Hungary’s ruling Fidesz party, last year wrote in an op-ed: “Why are we surprised that the simple peasant whose determinant experience was that the Jews broke into his village, beat his priest to death, threatened to convert his church into a movie theater — why do we find it shocking that twenty years later he watched without pity as the gendarmes dragged the Jews away from his village?”

The exhibition goes on to explore how the hopes for Jewish emancipation through communism were ultimately dashed, making some Jews prominent perpetrators of repression and turning many other Jews into victims.

“In the exhibition, we placed on the left a display of the many Jews that made up the NKWD,” said Gorin, naming the dreaded communist security police that was a precursor of the KGB. The NKVD was an instrument for the murder of countless people, before and under the bloodthirsty and anti-Semitic reign of terror of Soviet leader Joseph Stalin. “On the right we have a display of the many Jews they killed: authors, liberals, soldiers.”

Gorin said the juxtaposition is designed to impress upon visitors that “ultimately Jews are a people made up of very different individuals with different goals who, in 1917, were facing some very difficult choices.”