A view of the Dutch parliament building in The Hague, Netherlands, March 14, 2017. (Carl Court/Getty Images)
Advertisement

AMSTERDAM (JTA) — This week, only six months after I became a Dutch citizen, my wife congratulated me for being mentioned in parliament for my reporting on the Netherlands’ relations with Israel.

Flattered, I looked it up, expecting to find praise for my work. I was already kind of drafting, as journalists instinctively do, some grateful Facebook post on my integration success story.

There was just one tiny problem: The mention, which local Jewish leaders later condemned as anti-Semitic, was by a pro-immigrant, Muslim rights party that insinuated that I am a Zionist spy for Israeli intelligence.

The charges appear in a set of questions submitted to the chamber by Denk (“think” in Dutch), a party founded by two Dutch-Turkish politicians. Citing my reporting for JTA and prior service in the Israel Defense Forces, they suggested to Cabinet ministers that as a former member of the military, I am part of an effort by Israel to “spy on pro-Palestine activists in Europe.”

Seeing this elicited a rash of emotions, from disbelief and anger at my accusers to gratitude when strangers publicly leapt to my defense.

Let me back up. When I became a citizen earlier this year, I had both hope and doubts. Would a country defined by centuries of tolerance continue to show respect and acceptance for its religious minorities? Or would it succumb to pressures from the far right on the one hand and Islamists on the other?

To me, Denk’s attack demonstrated that my roots can be used against me — and maybe against my children, too — even in the once-tolerant society into which I thought I integrated.

What seemed to have inspired the party’s attack was my reporting about the appointment of Cabinet minister Sigrid Kaag, a former staffer for UNRWA, the United Nations agency for Palestinian refugees, who is married to a former ambassador of the Palestinian Authority to Switzerland.

In an article about her appointment, I wrote that in 1996, she accused Prime Minister Benjamin Netanyahu of using racist language. Denk accused me of misquoting Kaag in a “campaign of libel,” arguing that she was merely quoting Israeli critics of Netanyahu while expressing no opinion herself.

(I had quoted from her remarks, made during a heated debate on a television panel, slightly shortening her verbatim statement, in which she said: “Fortunately, there were yesterday night demonstrations by pro-peace Israelis who said Netanyahu’s way is of soundbites with blatantly racist, demagogic overtones about the Palestinian peace partner.”)

This prompted Tunahan Kuzu, a Denk lawmaker, to flag me in a query sent to the minister of general affairs and the minister of foreign affairs. Such queries, like congressional resolutions in the United States, are often used by lawmakers to draw attention to an issue and usually disappear into a digital archive.

Among the nine questions, Kuzu asked: “Is it true that Liphshiz worked for the intelligence services during his service as researcher for the Israeli army?” Followed directly by: “How do you view the fact that Israel uses its intelligence service to spy on pro-Palestine activists in Europe?” 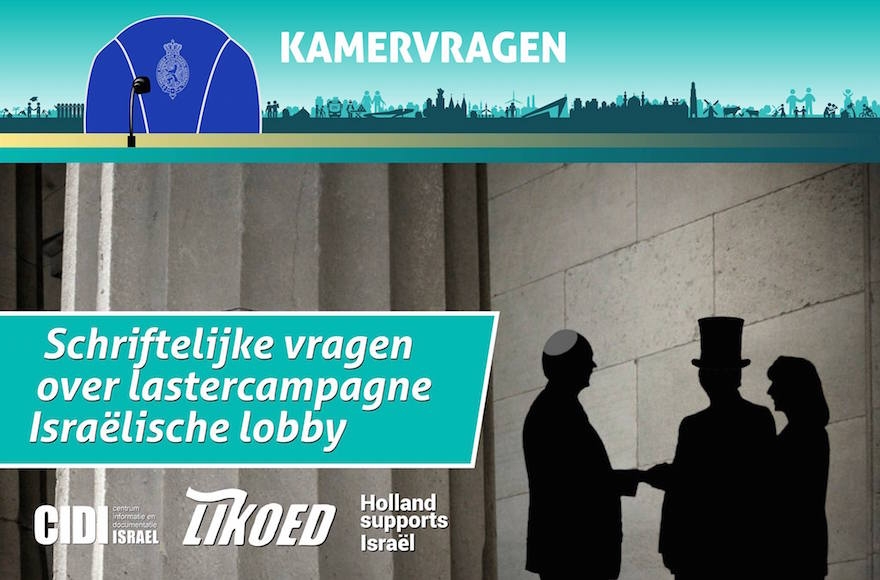 A set of questions to parliament members by Holland’s Denk party, which charges JTA reporter Cnaan Liphshiz and the “Israel lobby” with defamation, included an illustration deemed anti-Semitic by the country’s top anti-Semitism watchdog. (Denk)

For the record, I was born in Israel and served nearly one year in an elite commando unit in the IDF before completing my three-year compulsory service as a counterintelligence analyst, ending my service but for compulsory reserve duty, which I last had in 2009. After my discharge, I became a translator and then a journalist for Maariv and, later, Haaretz. I joined JTA in March 2012. My work as a journalist has remained wholly unconnected to my service in the army, which is the only government body I have ever served. I moved to the Netherlands in 2011.

My editors in New York regard Denk’s charges as “preposterous.”

“Cnaan’s military service has had absolutely no bearing on his long track record as an independent, professional, accurate, fair and award-winning journalist,” they wrote in a statement. “Cnaan reports on Jewish life across Europe and beyond in a now 100-year-old tradition of JTA correspondents who have provided comprehensive and unimpeachable reporting on Jews and Jewish issues throughout the world.”

My accusers entered the parliament in the March elections, courting Muslims with a platform that resists integration in favor of  a multicultural vision of Dutch society. Denk has been accused of anti-Semitism, and of countering discrimination against immigrants with its own radical vision of a Balkanized Holland.

Earlier this year, Denk’s leader, Kuzu, refused to shake Netanyahu’s hand during his visit to the Hague. On Sept. 28, another party member, Selçuk Öztürk, said during a plenary debate on ritual slaughter that other lawmakers should watch out for “the long arm of Israel and the Jews.”

In a statement last week CIDI, Dutch Jewry’s main anti-Semitism watchdog, came to my defense, rejecting the idea that “because a journalist served in the Israeli army,” he must be a spy. (I had worked briefly for CIDI as a researcher in 2011-12, compiling several reports for them.)

And it described an illustration on the party’s Facebook page, accompanying a draft of its charges against me, as anti-Semitic. The illustration featured the silhouette of a man in a yarmulke shaking hands with a man wearing a top hat — the kind one associates with 19th-century bankers.

CIDI Director Hanna Luden, who took up the position long after I had finished my work for CIDI, said her organization is “deeply concerned at how this sort of imagery and text are expressed and have found their way into the political arena. Increasingly, anti-Semitism is being relabeled as anti-Zionism.”

Luden also wrote that “it appears that Denk’s parliamentary query is not about its concern for Minister Kaag, but is rather an opportunistic abuse” of journalists reporting on her. Luden, who neither consulted nor informed me in advance about her statement, called on members of the Dutch parliament’s Foreign Affairs Committee to speak out against the Denk query.

To my knowledge, none have. Nor did the Dutch journalists’ union, of which I am a member.

I’m tempted to laugh off the episode. (On Twitter, I suggested that my moonlighting for the Mossad should entitle me to a raise — with no reaction from New York or Jerusalem so far.) But in truth, it showed me that I am more isolated and distrusted in my new country than I had previously thought.

Above all, I am saddened by the fact that the query accusing me of treason or disloyalty came from a party that represents mainly immigrants from the Middle East. It shouldn’t go unnoticed that our common enemies accuse them of the exactly the same thing.

On a personal level, I wonder what the people I interview – and more crucially for my extensive travels, immigration officers with no knowledge of the affair — might think when they Google my name, only to find an accusation on the Dutch parliament’s website that I am a spy. Or what an Islamist terrorist in search of a quality target might think upon reading my name — singled out publicly by his favorite party — which is also listed in the Dutch White Pages.

And what this would do to potential clients of my wife, who also is Jewish and has an Israeli last name. Or simply what the Dutch classmates of my children would make of it in a decade or so.

Then again, maybe I needn’t worry over that last scenario.

After all, with each new incident like this one, I and many other Jews across Western Europe are finding it increasingly difficult to imagine a future here at all for our children.