Why some religious Israelis are saying women are weakening the army 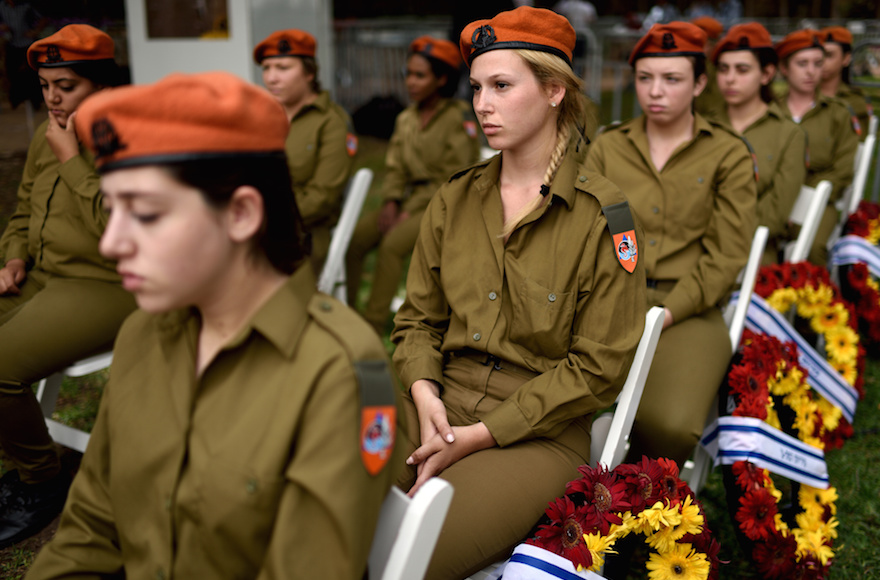 JERUSALEM (JTA) — A group of leading Orthodox rabbis met with the Israeli army’s chief of staff to complain.

According to Israel’s Arutz Sheva news website, the rabbis told Gadi Eisenkot on Tuesday that the growing ranks of female combat soldiers in the Israel Defense Forces are creating an immodest environment. They demanded changes to accommodate observant male soldiers.

The meeting was the latest expression of discontent by Israeli traditionalists with the military’s push in recent years to integrate women into combat units. They have decried what they see as the imposition of a progressive social agenda — not only on religious grounds but, in a new tactic, saying it undermines the army’s effectiveness.

Under Eisenkot, who became chief of staff nearly three years ago, the army has filled a growing number of combat positions with women. In March, the IDF introduced the fourth predominately female infantry brigade and let women serve in tanks for the first time. This year, the army said it expects the number of female “fighters” to reach 2,500. That’s more than four times the number just prior to Eisenkot’s arrival, and a jump to more than 7 percent of all combat soldiers.

Some religious and conservative Israelis have alleged that the changes are creating a dangerously sexualized atmosphere, with men and women training, eating, sleeping, showering and going to the bathroom in close quarters. Former high-ranking military figures are among the critics.

Last November, ex-military chief rabbi Brig. Gen. (res.) Yisrael Weiss warned that after a man and a woman served nine months together in a tank, “a little tank soldier would be born.” The same week, Col. (res.) Yonatan Branski, claimed that whenever members of a mixed-gender unit report for duty, “all the birth control sells out at the base canteen.”

Branski, an Orthodox researcher at the Jerusalem Institute for Strategic Studies, a new conservative security think tank, told JTA that sex is a distraction in many areas of the army where men and women serve together. However, he said, it is much a bigger problem in combat units because fighters serve together under unusually intimate conditions and cannot afford to be distracted.

“Did you ever hear of a mixed-gender professional basketball team?” he said. “The answer is no, and that’s because they want to win.” 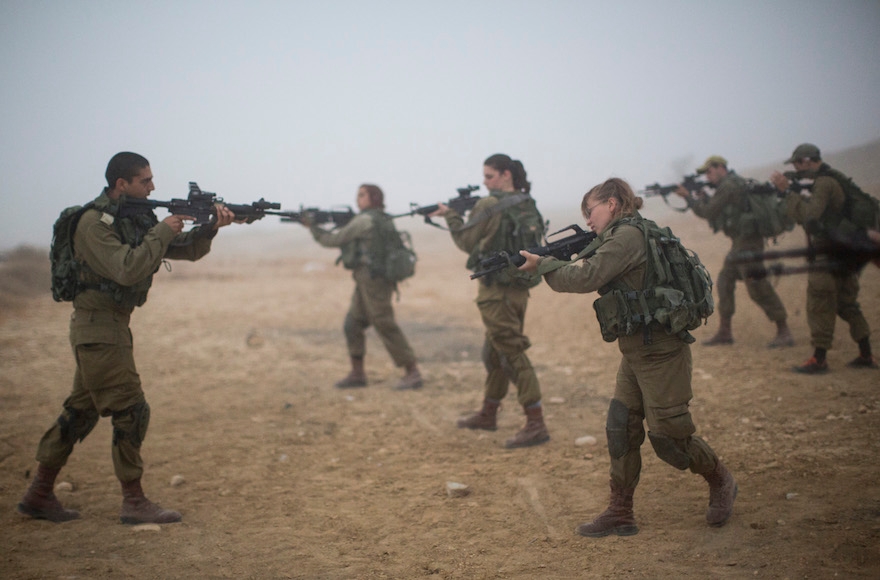 Serving alongside women is even more problematic for religious soldiers, who must constantly ensure that they do not violate Jewish legal prohibitions on interactions with women, said Branski, who was the first commander of the army’s haredi Orthodox battalion. Ultimately, he predicted, the army would have to choose what is more important to it: the combat service of women or religious men.

“At a certain point it becomes too intimate for an Orthodox soldier to serve at all,” he said. “What does the army prefer, giving up thousands of highly motivated young religious men or some highly motivated women?”

A report by the IDF ombudsman published in May cited a number of problems integrating women into combat units, including a lack of showers that sometimes forced women to use the same facilities as men. But Eden Liberman, a 23-year-old commander of Israel’s first mixed-gender infantry brigade, called Caracal, said her soldiers, including the religious men and women, have moved past traditional gender roles and come to see each other as comrades in arms.

“When there is some sort of security threat, it doesn’t matter whether it is a man or a woman. They’ve all learned to trust each other and to respond accordingly,” Liberman told JTA. “All kinds of stigmas are erased, and bonds are created between boys and girls that are different than those you see anywhere else.”

Critics have also alleged that the army has lowered its combat fitness standards to accommodate female soldiers and protect them from injury. They have noted that mixed gender brigades carry lighter weapons and less ammunition, and they have alleged that training has been made easier

Some have concluded that the army is under the sway of left-wing organizations. Last November, Maj. Gen. (res.) Yiftah Ron-Tal, went so far as to accuse such groups of seeking “to weaken the capabilities of our military,” though he later retracted the comment.

The army has acknowledged making adjustments to bring women into combat units. In response to the ombudsman report’s finding that female soldiers were injured at a high rate early in their training, it pledged to make more. But the army has said the moves are ultimately in service of operational needs. The mixed-gender brigades have largely taken over guarding the Egyptian and Jordanian borders, allowing more heavily armed units to focus on more urgent security needs.

An intelligence officer for the Caracal battalion, who spoke to JTA on condition of anonymity, said the army’s integration of women was motivated initially by changing social values. However, she said, the army quickly saw strategic benefits as well.

“The IDF is not just about security issues. It is also a social institution, and there was a lot of demand to integrate women,” she said. “But once girls were allowed to join these units, we saw it was a huge success. The public pressure proved itself.”

She said the effectiveness of Caracal has disproved the doubters and shown that women are fully capable of serving alongside men in combat.

“As a former fighter, I can tell you that girls can do all the same things as boys and even better,” the intelligence officer said.

Despite the criticism, the army appears dedicated to testing that proposition. On Sunday, the Air Force appointed its first female deputy commander of a fighter jet squadron and two other women to deputy commanders positions in drone squadrons. And the following day, the army announced the appointment of a woman to head the Home Front Command’s Planning and Doctrine Department.

Arutz Sheva, which is a religious Zionist newspaper, reported that Eisenkot told the rabbis in their meeting Tuesday that it may be possible to eventually tweak the way men and women serve together for the benefit of religious male soldiers. However, the newspaper added that the army chief did not deliver the same message to a women’s group that came to meet with him later in the day.