60,000 joined a Polish nationalist march. Should Jews be worried? 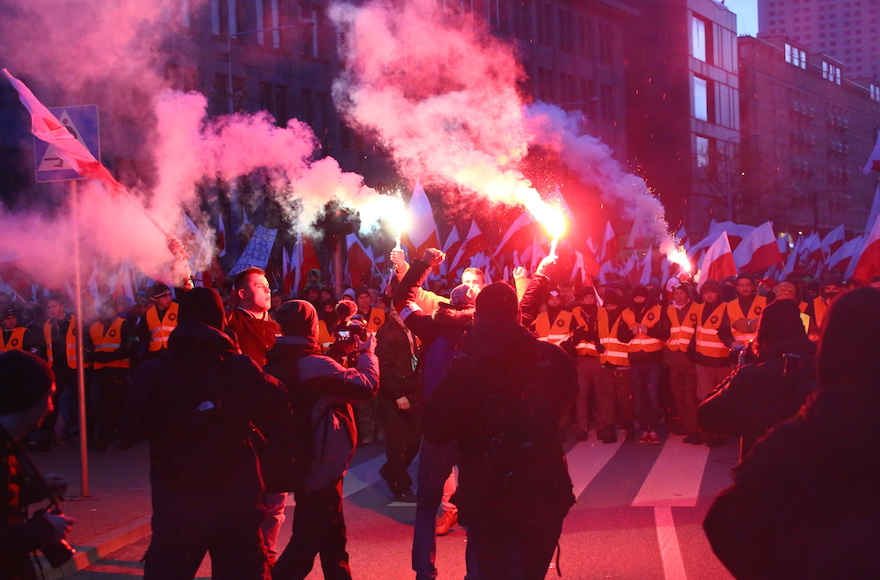 (JTA) — The sight of far-right activists waving racist banners and shouting anti-Semitic slogans during a nationalist march in the capital of Poland over the weekend shocked many around the world.

It was an understandable reaction to witnessing tens of thousands in Warsaw marching near what used to be the largest Jewish ghetto during the Holocaust amid shouts of “Jews out” and “Remove Jewry from power.”

The march, an annual event that began in 2009 with 500 participants on Poland’s national day, Nov. 11, was not necessarily the largest so far. Similar numbers of marchers showed up last year. But it did showcase the rising strength of Polish nationalists who are feeling emboldened by the conservative government in Warsaw — and to some extent by the election of Donald Trump as U.S. president.

Despite its size, the Warsaw gathering was neither unusual nor even particularly toxic compared to similar gatherings in other countries in Central and Eastern Europe. Similar or worse displays have occurred regularly in other post-communist countries — including in Ukraine earlier this year and annually in the Baltic states — where the far right is far more powerful and violent than in Poland.

In the aftermath of the march, JTA posed five questions on the situation to some of Poland’s leading experts on the issue and a former leader of its Jewish community.

Does Poland have a fascism problem?

Despite their growing visibility, ultranationalist Poles have neither the prominence nor acceptance they seem to enjoy in Lithuania, Latvia, Hungary and Ukraine.

Still, their popularity among young people is seen as a worrisome sign, according to Rafal Pankowski, co-founder of the Polish anti-racism group Never Again, who cited a 2013 survey of high school students showing that 44 percent would rather not have Jewish neighbors and more than 60 percent would not want to have a Jewish boyfriend or girlfriend.

“The sociological data shows us that the younger generation is more prone to xenophobia than that of their parents, which is perhaps the most alarming aspect of the phenomenon,” Pankowski said.

Though there were certainly racists at Saturday’s march, there were also “ordinary people, families who just wanted to do a patriotic act, which to them is just to march with the Polish flag,” said Piotr Kadlcik, the former president of the Union of Jewish Religious Communities in Poland.

And while some shouted offensive slogans about Jews, there were no known anti-Semitic banners on display, nor was there rioting or violence.

“In a way this is scary, too, because it shows the far right have their act together and can demonstrate the discipline of a political movement  rather than a bunch of hooligans,” Kadlcik said. “But there was very little intimidation.”

Polish Jews are split on whether anti-Semitism has increased under the conservative Law and Justice party, which rose to power in 2015.

Polish Jews agree that racist violence in their country is relatively rare. Only a few dozen anti-Semitic incidents are recorded annually, most of them verbal, though several anti-Semitic statements were made by Polish politicians.

Those are crucial differences, Kadlcik said, between Poland and other countries in the region.

In Hungary, activists from the ultranationalist Jobbik party, the country’s second largest, rally regularly in the thousands and sometimes terrorize Jews, as well as Roma and gays. In Ukraine, synagogues and Jewish cemeteries are routinely targeted and activists for the xenophobic Svoboda party call for chasing “Jews out.”

In Latvia, veterans of the Nazi Waffen SS march every year. In Bulgaria, the Lukov March, named for a Nazi ally, also draws thousand of participants. And in Lithuania, nationalist marches often feature swastikas and other fascist symbols.

“Things are bad, but they’re not as bad as many people think, at least not yet,” Kadlcik said of Poland.

Why is the far right growing in Poland?

Spared the political instability of war-torn Ukraine and the financial crisis gripping Hungary, Polish voters have not displayed the same penchant for raw nationalism as some of their neighbors. Law and Justice is decidedly right wing in that it opposes immigration from the Middle East, seeks to limit access to abortion and increase its control over the media. But the ruling party also has scrapped its plans for asserting greater control over the judiciary and vocally opposes anti-Semitism. It also celebrates rescuers of Jews during the Holocaust.

Pankowski cites a number of factors in explaining the rise of Polish nationalism. As citizens of a key NATO ally with bitter memories of Russian domination, many Poles have been driven to nationalism in response to Russian expansionism under President Vladimir Putin. The rise of the far right elsewhere in Europe, and the election of Trump, is also “creating a feeling of solidarity,” Pankowski said.

“The U.S. election is an important factor,” said Pankowski, who noted that the official banner of the Warsaw march — “We Want God” – was taken from a Polish poem Trump quoted during his July visit to Poland.

Do Jews have anything to do with it?

Anti-Semitism was neither a central theme of the Polish far right, nor was it very prominent at the Warsaw march, observers said. Most of the focus at Saturday’s rally was Muslim immigration, Pankowski said. Among the banners on display was an anti-Muslim caricature drawn by a Danish cartoonist in 2005 carrying the slogan “Mohammed not welcome.”

Nonetheless, Jonny Daniels, founder of From the Depths, which promotes Holocaust commemoration in Poland, filed a complaint on Monday accusing marchers of incitement to hate and calling on the government to identify and punish them to the full extent of the law. Marchers found guilty could face up to three years in prison.

“Hatred of Jews remains an element of the identity of the far right in Poland even though it has no large Jewish community, and that’s what was on display at the march,” Pankowski said.

What do Polish Jews say?

The issue of anti-Semitism in Poland is a contentious one among its Jews and led to a public row among community leaders in August.

Leslaw Piszewski, president of the Union of Jewish Communities in Poland, and Anna Chipczynska, head of the Warsaw Jewish community, sent a letter to Law and Justice leader Jaroslaw Kaczynski saying that Polish Jews are increasingly fearful due to government inaction in the face of rising anti-Semitism.

But Artur Hofman, who runs the country’s largest Jewish cultural organization, TSKZ, dismissed the letter as “stupid” and scheduled a meeting with Kaczynski. Daniels and two Chabad rabbis also attended.

Sergiusz Kowalski, a leader of a Polish branch of B’nai B’rith and an ally of Piszewski and Chipczynska, called the four men who met Kaczynski “court Jews.” And Michael Schudrich, the chief rabbi of Poland, said in an interview with the Forward that Daniels “has become a supporter of the ultra-right wing.”

Daniels, a frequent target of the far-right online who has criticized ultranationalism in Poland and Holocaust denial, has denied this, adding his organization is willing to participate in intercultural dialogue with a wide range of partners.

For the most part, Israel has remained silent about Holocaust revisionism and incidents of anti-Semitism in countries that have friendly ties to the Jewish state. But on Monday, a spokesman for its Foreign Ministry called the Warsaw event “a dangerous march of extreme and racist elements,” and urged Polish authorities to act against the organizers.

Last year, Israel’s ambassador to Poland, Anna Azari, hosted Tadeusz Rydzyk, a Catholic priest who runs a radio station that the U.S. State Department has called a main purveyor of anti-Semitism. She defended the move as important outreach even as Never Again, Pankowski’s group, called it a “big mistake.”

Azari did speak out last month against proposed legislation on restitution, arguing its preclusion of claims by distant relatives and non-citizens discriminates against Jews whose families lost property in Poland during or after the Holocaust. An Israeli restitution official told JTA, referring to the proposed law: “First the Nazis seized private property and then the communist authorities of Poland seized it, when most Polish Jews were already dead.”

Ultimately, however, Israel’s attitude seems to be guided by comments Prime Minister Benjamin Netanyahu made in 2013 during the visit by Polish President Bronislaw Komorowski to Jerusalem. Noting the suffering of non-Jewish Poles and Jews under Nazi occupation, Netanyahu observed that “Poland and Israel have to support each other.”