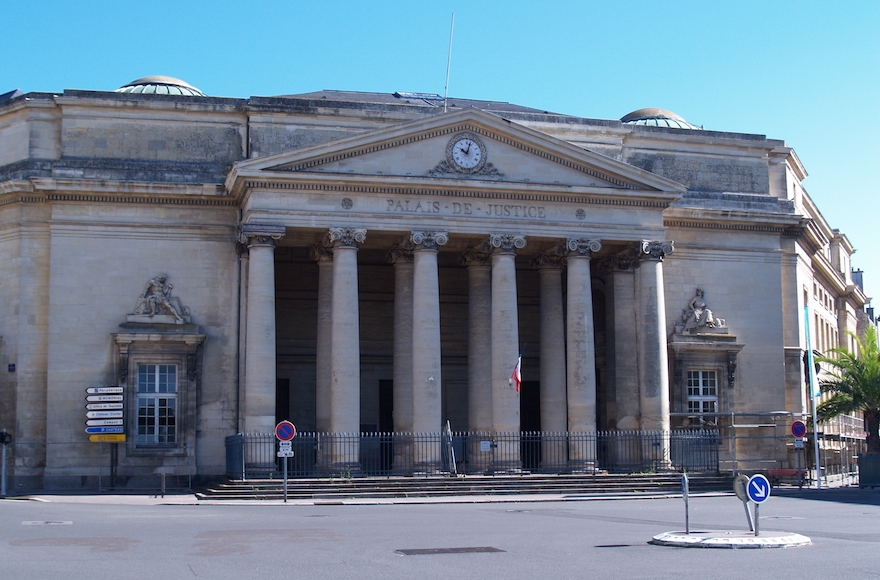 A French court in the city of Caen. (Wikimedia Commons)
Advertisement

(JTA) — Amid vocal protests by leaders of French Jewry on the judiciary’s handling of anti-Semitic crimes, French courts made a series of tough rulings on inciters to hatred of Jews.

In three separate rulings last week, French judges rejected the appeal of the far-right Holocaust denier Alain Soral against his prison sentence, affirmed the eviction of his associate and career anti-Semite Dieudonne M’bala M’bala from his Paris headquarters and slapped a $1,700 fine on a teacher who inveighed against Israel and the Jews.

The rulings came amid unprecedented criticism by CRIF, the umbrella group of French Jewish communities, and other French Jewish groups on judicial actions and decision that it said were too soft on anti-Semites, encouraged terrorism or amounted to a cover-up of hate crimes against Jews.

The National Bureau for Vigilance Against Anti-Semitism, which earlier this month heavily criticized the acquittal from murder charges of an accomplice of the killer of four Jews in Toulosue in 2012, applauded the Nov. 9 verdict against Soral, who in 2012 co-founded the Anti-Zionist Party with Dieudonne, a comedian with multiple convictions for inciting hatred against Jews whom former Prime Minister Manuel Valls called “a professional anti-Semite.”

Soral, who also has multiple convictions — including for saying Adolf Hitler “should have finished the job” — was sentenced to three months in jail in March. He also was fined approximately $16,000. French courts rarely impose heavy fines for hate speech and seldom send individuals found guilty of this offense to prison.

Earlier this year, CRIF and the National Bureau for Vigilance Against Anti-Semitism mounted a vocal protest campaign over the absence of hate crime charges from an initial indictment against Kobili Traore, who confessed to killing his Jewish neighbor, Sarah Halimi. Traore, who reportedly had called Halimi’s daughter a “dirty Jew,” screamed about Allah and killing Satan while he pummeled Halimi in her Paris apartment in April.

In September, prosecutors included the hate crime charges in a revised indictment that followed intense lobbying and vocal protests by CRIF, including to President Emmanuel Macron.

The Nov. 8 sentence against Dieudonne comes two years after a lower court ordered him to leave the building that has housed his Main D’Or theater since 2002. The eviction order follows failed safety inspections and a motion to nullify the rental contract for the theater by the owners.

Dieudonne, whom tax authorities say is deliberately insolvent to avoid paying fines for his multiple hate speech convictions, on Nov. 8 also was ordered to pay nearly $6,000 to anti-racism groups that sued him for comparing on stage in 2014 the treatment of blacks by Jewish slave owners to how the Nazis treated Jews.

Separately, the Correctional Tribunal of Paris fined a former English teacher at the prestigious Janson-de-Sailly High School some $1,500 on Nov. 9, Le Parisien reported, over her posting on Facebook last year that “the American Jewish lobby” supports Hillary Clinton’s presidential campaign and that then-French President Francois Hollande “is a Jew who benefited from his belonging to that community to ascend in politics and who now denies this.”