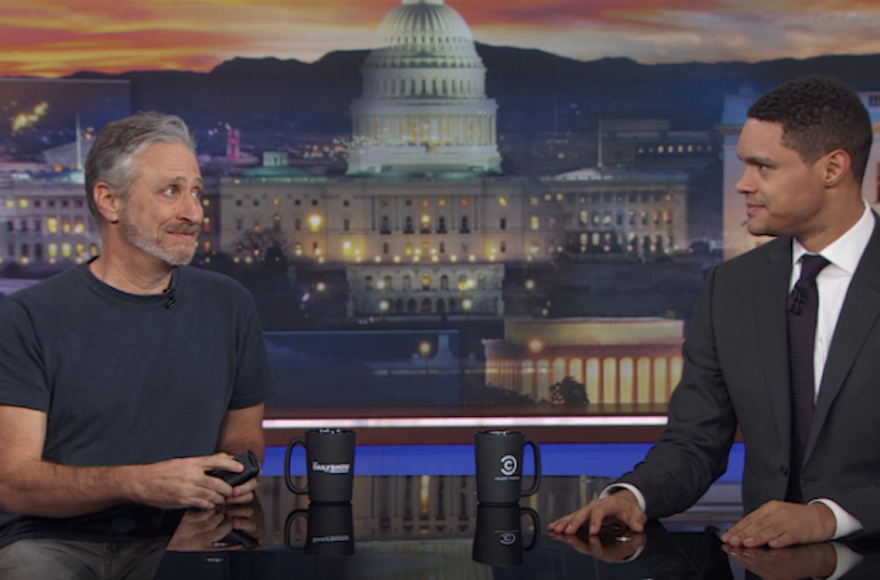 (JTA) — Jon Stewart made a surprise appearance on “The Daily Show” as the Jewish character of the week: Bernie Bernstein.

Does the name ring a bell? Yes, Bernie Bernstein is probably the name of that old guy from your synagogue who is always complaining that the lox at kiddush isn’t fresh enough.

But the name was also given to the made-up reporter who made a robocall to discredit sexual assault allegations against Alabama Senate hopeful Roy Moore. Some, including the CEO of the Anti-Defamation League, decried the robocall as anti-Semitic, given the fake reporter’s Jewish-sounding name and strong, nasally Northeastern accent.

On Thursday night’s episode of “The Daily Show,” Stewart did his own Bernstein impression — Jewish stereotypes and all.

The skit starts off with host Trevor Noah poking fun at the robocaller’s accent.

“I don’t even know what that accent was. It sounded like a guy trying to do a New York Jewish voice based on hearing a friend describe a Woody Allen movie,” Noah jokes.

Suddenly, Noah receives a call from Stewart on his cellphone.

Stewart then comes on stage saying he actually wanted to promote the Night of Too Many Stars, an autism benefit show he is hosting on HBO.

Noah tells Stewart that he is welcome to come on the show anytime.

“You don’t need anti-Semitism to come on the show, Jon. You could’ve just asked me,” Noah says.

“I don’t need it, I just like it that way,” Stewart quips back.