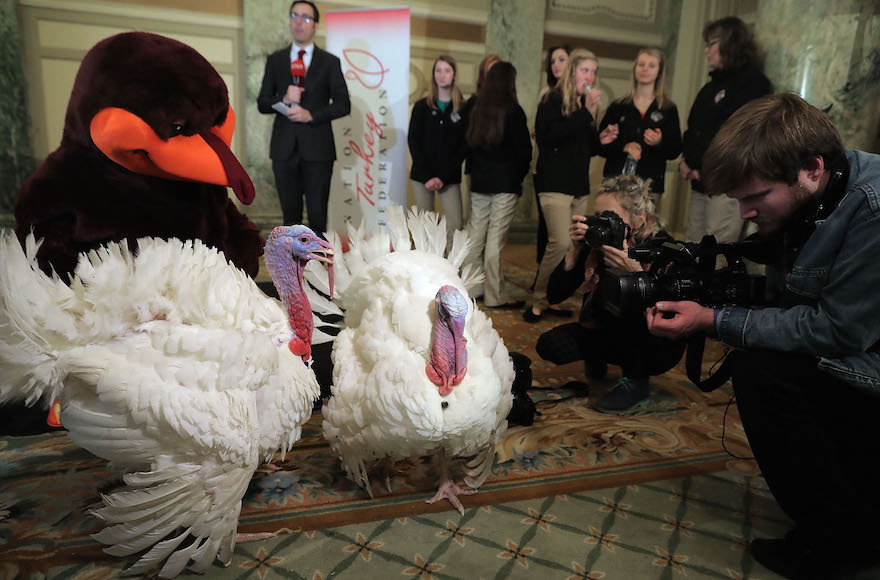 Two turkeys, Drumstick and Wishbone, posing for photographs with the Hokie bird mascot from Virginia Tech University, during an event hosted by The National Turkey Federation at the Williard InterContinental in Washington, D.C., Nov. 20, 2017. Each year, the U.S. president pardons a turkey before Thanksgiving. (Chip Somodevilla/Getty Images)
Advertisement

(JTA) — None of us want to think too hard about the turkeys we are about to eat on Thanksgiving. We especially don’t need to think about the excrement they produce.

But what if that excrement could help halt climate change?

According to researchers at Israel’s Ben-Gurion University, turkey excrement — along with waste produced by other poultry, like chicken — could partially replace coal as a renewable energy resource and reduce global greenhouse gas emissions.

“Treated excrement from turkeys, chickens and other poultry, when converted to combustible solid biomass fuel, could replace approximately 10 percent of coal used in electricity generation, reducing greenhouse gases and providing an alternative energy source,” the university said Monday in a news release.

As the release explains, scientists led by Ph.D. candidate Vivian Mau and Professor Amit Gross converted turkey poop to biomass fuel to test its potential. By heating it through a process called hydrothermal carbonization, or HTC, they mimicked the formation of coal and turned the excrement into “hydrochar.”

The resulting hydrochar was encouraging: It yielded 24 percent more energy than a similarly sized batch of coal and produced less of the harmful compounds methane and ammonia. The process also did not mean reinventing the wheel.

“Poultry waste hydrochar generates heat at high temperatures and combusts in a similar manner to coal, an important factor in replacing it as renewable energy source,” Mau and Gross wrote.

Crops that get turned into this kind of biomass fuel are already grown around the world for energy production purposes, but they take a deep toll on land, water and fertilizer resources. In addition, the ways big companies traditionally dispose of poultry excrement have been linked to environmental issues.

Over a quarter million turkeys are produced each year in the United States, and 100 six-week-old broilers can provide about 30 to 35 pounds of manure per day. Scientifically speaking, that’s a lot of poop.

So enjoy the good news — but try not to think about it at your upcoming Thanksgiving feast.