After Nazis killed her family, this woman joined the partisans to fight back 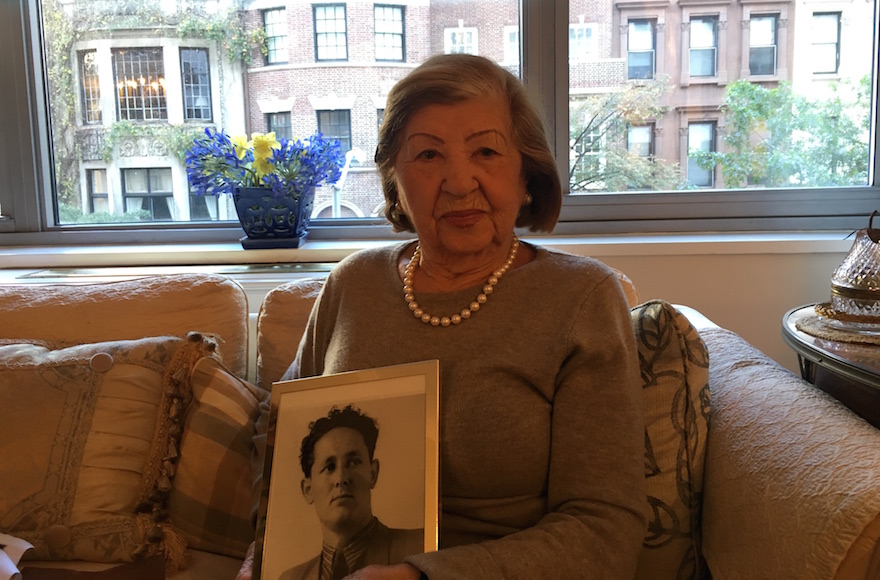 NEW YORK (JTA) — Nazis came for Rose Holm’s family in the afternoon. By the evening, the 16-year-old was lying among corpses in the underground bunker where she and her family had been hiding.

Among those shot and killed were Holm’s parents, brother and one of her sisters, as well as some 85 other Jews hiding in the bunker outside Parczew, a town in the eastern part of Poland. Only one family member other than Holm survived: a sister who had left the bunker with her husband and young daughter before the Nazis came.

That unimaginable incident would go on to motivate Holm to fight back against the Nazis.

A few months later, she met a childhood friend who recruited her to join a group of Jewish partisans. Members of the fighting unit, which was under the command of Chiel Grynszpan, lived in the forest by day and fought the Nazis at night.

“I was thinking ‘I have to take revenge, whatever’s going to be, I don’t care,'” Holm told JTA last month at her Upper East Side apartment. “I never [used to] think I’m going to be alive, and that’s the way I survived with the partisans.”

Today, Holm is elegantly dressed and soft-spoken. She wears a pearl necklace and offers home-baked cookies.

As a partisan, it was a whole different story, she said.

Holm is among a shrinking group of living partisans.

“Each year there are fewer Jewish partisans who are able to share their experiences,” Sheri Pearl Rosenblum, director of development and outreach for the Jewish Partisan Educational Foundation, told JTA in an email.

Holm was one of just five women in her unit, which started with 25 people but grew to around 250 by the end of World War II. Partisan fighter units were reluctant to have women and children as members, but the friend who recruited her — her future husband — told the other fighters that the two were a package deal.

As part of the unit, Holm and the other women carried supplies and helped detonate hand grenades. The group focused on destroying bridges and roads that Nazis were using.

“A train used to come, so we used to throw the hand grenades,” she recounted. “The hand grenades were very scary because if you pulled the ring [incorrectly], it could kill you.”

Partisans would sleep in the forest with little to no protection from the elements.

“The first winter was a very, very bad winter. We used to sleep in the woods under the snow,” Holm said.

They would make do with whatever food they got from non-Jewish Poles, who had been threatened that they would be killed if they did not aid the fighters.

“For survival you do everything, you don’t think you’re a human being,” she said.

Sometimes the partisans would get a pig to grill in the forest.

Many times she came close to dying. In one incident, Holm entered the house of a non-Jewish Pole to get food and supplies. A German soldier discovered her and she ran, holding on to a sweater the Pole had given her. Later she found bullet holes dotting the side of the sweater, where the soldier had shot at her and narrowly missed.

During her time as a partisan, Holm didn’t think about life after the war.

“I didn’t think I was going to be alive,” she said.

She became close with the friend who recruited her, and the two went on to marry shortly after the war surrounded by the friends they made as partisans. In 1945, the couple moved to a displaced persons camp in Germany before leaving for New York in 1949, where she found a job in a dressmaking factory and he in a cardboard box factory.

Joe Holm later opened his own butcher shop before the couple founded a factory producing women’s sweaters about 10 years after moving to the United States. They had two children.

Joe died in 2009. Today, Holm lives in their home surrounded by photos of her husband, children, four grandchildren and three great-grandchildren.

Holm once would not speak about their wartime experiences; talking about them makes her sad. In 2013, however, she told her story in a video for the Jewish Partisan Educational Foundation. The group also honored Holm and her husband at galas in 2010 and 2011. Earlier this year her son, Steven, emceed an event by the foundation honoring surviving partisans and their descendants.

There’s also another emotion that comes with telling her story: incredulousness that she went through what she did and survived.

“My whole life, I’m just laying sometimes in bed and thinking ‘is this true?'” she said. “I was thinking that I was reading [the story in] a book, that it’s not from my life.”