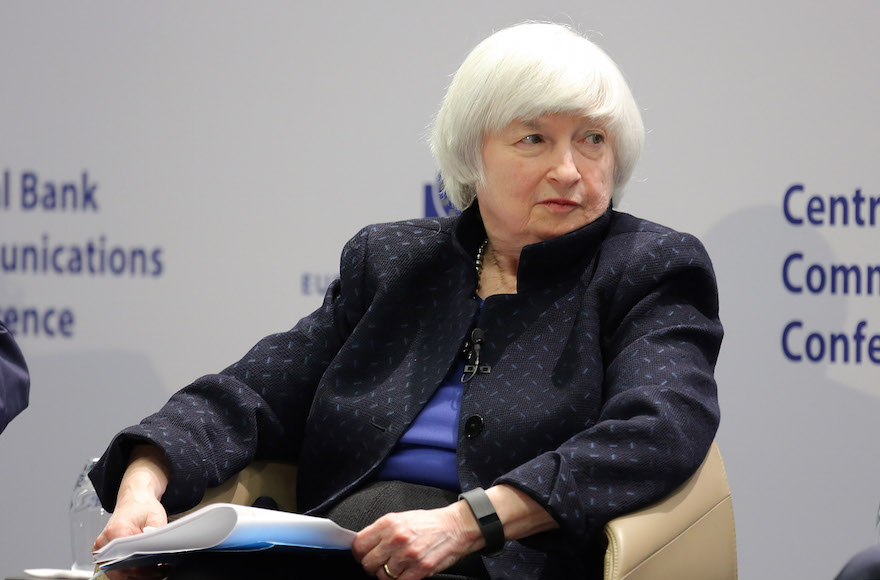 (JTA) — Janet Yellen submitted her resignation from the board of governors of the Federal Reserve.

Yellen’s resignation will go into effect upon the swearing in of a new chair of the central bank. President Donald Trump has nominated current Federal Reserve Governor Jerome Powell to take the post.

With the departure of Yellen, Trump will have four open seats to fill on the Federal Reserve board. Past presidents have traditionally reappointed their predecessor’s choice to lead the Fed.

Yellen’s term as chair of the Federal Reserve expires on Feb. 3. However, she could have chosen to remain a governor, since she was appointed to the board by President Barack Obama for an unexpired term ending in 2024. Yellen served one term as Fed chair.

She and two other Jews involved in finance — Lloyd Blankfein and George Soros — were featured as villains in a campaign ad broadcast on the eve of last year’s election. Photos of the three Jewish financial leaders flashed by as then-candidate Trump talks about “global special interests” and the “global power structure.”

In her resignation letter Yellen, 71, promised to assist in Powell’s transition and expressed confidence that he is “deeply committed” to the Fed’s mission.

“As I prepare to leave the Board, I am gratified that the financial system is much stronger than a decade ago, better able to withstand future bouts of instability and continue supporting the economic aspirations of American families and businesses,” she wrote.