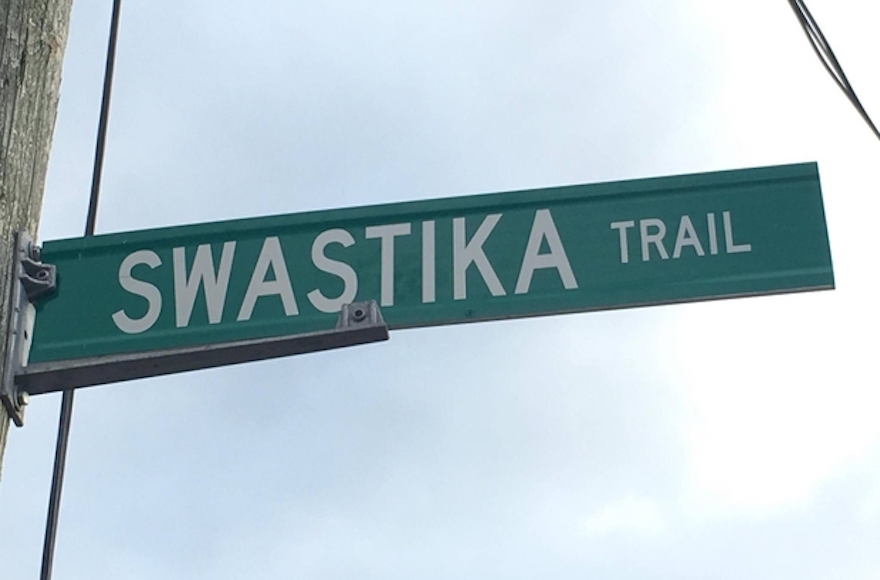 (JTA) — Residents of Swastika Trail recruited a Jewish advocacy group to help get their street renamed.

Two couples living on the street reached out to B’nai Brith Canada, a Jewish advocacy group, for advice on how to convince their Puslinch Township to change the name. The council of the town, located in Ontario, Canada, some 50 miles west of Toronto, will reportedly discuss renaming the street at its December 20 meeting.

Many Puslinch locals told B’nai Brith Canada they are embarrassed by the trail’s name, especially when forced to use it on drivers’ licenses and other government documents. B’nai Brith last week opened an online petition calling on township officials to change the street’s name.

“Tens of thousands of Canadian servicemen made the ultimate sacrifice to combat Nazi tyranny. Millions more were victimized by the evil depravity symbolized today by the swastika. Maintaining this street name would be an insult to Holocaust survivors, and a gross disservice to our veterans,” he added.

But residents of the street voted on the issue earlier this month, with a slight majority voting in favor of keeping the name, according to the Canadian Press. The street was named in the 1920s. Residents told the Canadian Press that the swastika should not be vilified as it is an ancient symbol meaning life and good work and that only since the Nazi era has it come to symbolize hate and racism.

There is a town in northern Ontario called Swastika, which is named after a local goldmine which used the symbol for good luck.