Why kosher butchers in Western Europe are preparing to close shop 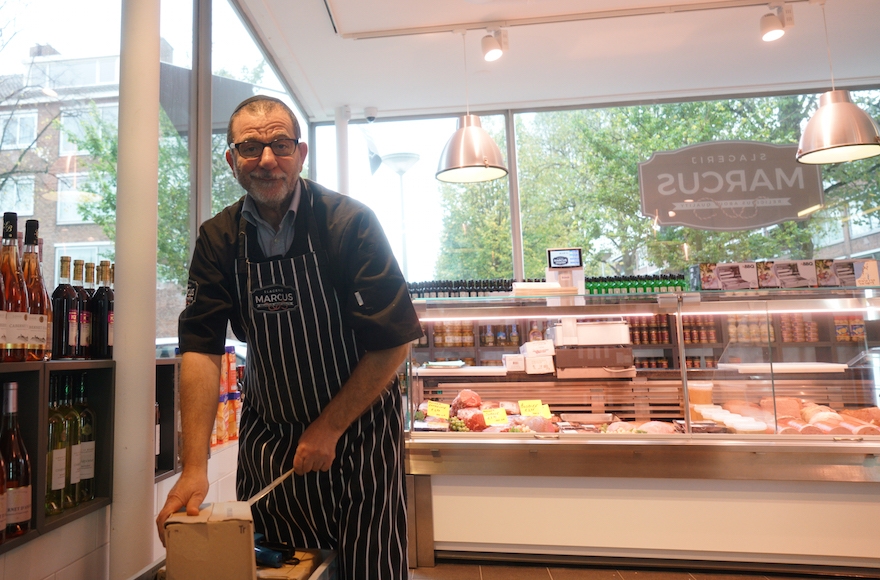 PARIS (JTA) – When Jerry Levy’s family opened one of the first gourmet kosher meat shops in France, they had some of the country’s best-laid business plans.

Hailing from a long line of Jewish butchers in their native Tunisia, they had the expertise and diligence in 1977 to cater to the changing needs of their growing community, where tens of thousands of Jewish immigrants from North Africa like them were developing both the appetite for quality — and the means to pay for it.

Four decades on, the family’s gambit certainly has paid off: Levy’s meat shop and deli in this city’s 17th district is a communal institution. With a kiss on the cheek, Levy and his teenage son, Maurice, welcome dozens of regulars daily to Boucherie Jerry Levy who swear by the signature foie gras, artisanal charcuterie and assortment of North African salads.

But like other producers of kosher meat in Western Europe, the Levys are no longer certain of the viability of their business. In recent years they have been suffering both from declining revenues due to emigration from France by Jews fearful of jihadist violence and anti-Muslim measures targeting the ritual slaughter of animals.

“I want Maurice to learn a trade because with the meat industry, who knows what tomorrow will bring,” Levy told JTA about his 17-year-old son. “All kosher delis, they will be a thing of the past within one generation either because they’re made illegal, suffocated by anti-kosher regulations or defeated by supermarkets.”

Not all kosher meat producers in France, a country with 500,000 Jews, share Levy’s pessimism. But several of his counterparts in the Netherlands and Belgium do following a fresh wave of restrictive regulations and legislation in those countries, where a total of 90,000 Jews live.

In Holland, the viability of the country’s only kosher slaughterhouse, Slagerij Marcus, and its meat shop are under threat from a new deal signed in July by the government with the Jewish community, according to Slagerij Marcus’ lawyer, Herman Loonstein. The measure limits the production of kosher meat to local consumption, a stipulation that Loonstein says amounts to an export ban that may render the business nonprofitable.

Community representatives say they reached an oral agreement with the government that will head off the export restrictions, but a government spokesman declined to confirm the claim.  The spokesman told JTA only that “special circumstances may be taken into account” when it comes to export.

Either way, “The leash keeps getting tighter and tighter, and there are questions on what kind of future there is for the industry,” said Luuk Koole, the longtime manager of Slagerij Marcus.

Iris Jonah is among the hundreds of Dutch Jews who depend on the meat shop and deli; she says it’s her only dependable source for fresh kosher meat. Kosher ground beef is on offer at several Dutch supermarkets, but only at Marcus’ can she find steaks, veal and corned beef for her family of six.

“If they close shop, I don’t know what I’ll do, we’ll be in a big problem,” Jonah told JTA last month. “It’s already tough to lead an observant Jewish lifestyle here as it is without this added complication.”

Jews in the Netherlands could still import kosher meat from France even if Marcus closes. But the quality won’t be the same, according to Nissim Guedj, the France-born store manager at Slagerij Marcus’ meat shop.

“There’s no comparing the far superior quality you get here,” he said of Dutch meat.

A closure could also mean the end for one of Dutch Jewry’s fabled delicacies, a fatty kind of corned beef known as pekelvlees that is produced commercially only at Slagerij Marcus and sold at the iconic Sal Meijer Jewish sandwich shop in Amsterdam.

In Belgium, meanwhile, legislation was passed this year in two of the federal kingdom’s three regions — including Antwerp’s Flemish region, with its predominantly haredi Orthodox Jewish community of 18,000 – that starting in 2019 bans all slaughter performed without first stunning the animal.

Jewish and Muslim religious laws require animals be conscious at the time of their slaughter, a custom that animal welfare activists call cruel and anti-Muslim activists say is barbaric.

Rabbi Pinchas Kornfeld, a communal leader from Antwerp, told JTA on Monday that his congregation is considering an appeal of the legislation in court. Unlike the Dutch community, Antwerp’s predominantly haredi community is so strict that French kashrut certification may not suffice for its leaders, placing the community and its congregants in a potential bind when the bans go into effect.

The current wave of legislation in Belgium and the Netherlands follows an earlier drive to ban ritual slaughter. In the latter, opposition led by the far-right Party for Freedom and animal welfare activists spurred a ban on kosher and halal practices in 2010, but it was overturned by the Dutch Senate in 2012.

In 2013, the Polish parliament also banned the practices, though the prohibition has since been partially overturned.

Slaughter without stunning is now illegal in five European Union member states – Sweden, Denmark, Finland, Lithuania and Slovenia — as well as three other non-EU countries in Western Europe: Norway, Switzerland and Iceland. EU members Austria and Estonia enforce strict supervision of the custom that some Jews there say make it nearly impossible.

Attempts to promote such legislation in France, however, have failed.

Back in Paris, Levy says his immediate concern is with the departure of Jews and not the introduction of laws against their food.

Since 2014, at least 25,000 French Jews have immigrated to Israel alone — a 260 percent increase from the 9,537 who left France for the Jewish state in the previous five years. Levy’s father also left, as did other family members.

And although their departure has made only a small dent in France’s Jewish community overall, their absence has had a disproportional effect on Levy’s business, he said.

“Those who left are exactly my clientele,” Levy said at his meat shop.

Across the street from his meat shop’s blue facade, two French soldiers toting machine guns stood guard as part of their deployment around Jewish shops and neighborhoods in Paris following the 2015 slaying of four Jews at a kosher supermarket by an Islamist.

As Levy sees it, the French Jews who are leaving are observant individuals with the means to forego the French state’s generous welfare, and who fear for their security following multiple anti-Semitic attacks since 2012 on Jewish schools, supermarkets and other institutions serving mainly affiliated community members.

“The assimilated Jew who eats pork and whose son attends a public school, they’re not likely to leave,” Levy said. “Neither is the poor Jew in social housing. But neither is likely to come to my meat shop anyway.”

French immigration to Israel, which in 2015 peaked at approximately 8,000 newcomers, has subsided, with less than half that number immigrating in the first 10 months of this year. But Levy said that growing initiatives in France targeting kosher meat and the Muslim variant, halal, are compounding his losses and threatening the viability of his businesses.

The problem, he says, are campaigns headed by the National Front party, which opposes what its leader, Marine Le Pen, describes as “Islamist globalization.” Le Pen won 34 percent of the national vote in the first round of the 2016 presidential elections. She ultimately lost to Emmanuel Macron, but it was her best-ever showing.

In recent years, opposition to halal and kosher meat has grown significantly amid awareness-raising efforts by National Front and animal welfare activists who believe that the Jewish and Muslim custom of slaughtering animals without stunning are cruel.

Since 2011, hundreds of butchers in France have adopted a label declaring that their meat only comes from animals that were stunned. Reaching approximately 10 percent of all French meat shops, it was a stunning success of a campaign launched that year by the Vigilance Halal association founded by an anti-halal veterinarian and promoted by National Front.

This has lowered the demand for meat left over from animals that were used for ritual slaughter, Levy said, explaining that kosher rules allow Jews t0 use only 15-20 percent of the cow.

Once a shochet, or certified slaughterer, has taken the kosher bits, the slaughterhouse where he performed the work buys the leftover meat from him. But with demand falling for that product, “slaughterhouses don’t view us as the ideal customers anymore,” Levy said.

“They are paying less than 10 years ago,” he said.

Meanwhile, politicians in France are pressing for the obligatory labeling of meat that does come from animals that were slaughtered without stunning.

In 2013, an advisory committee of the French Senate on the meat industry for the first time made a nonbinding recommendation for such labeling, prompting passionate condemnations by Jewish and Muslim faith leaders.

But even without obligatory labeling, the awareness-raising campaign means that “a non-Jew today wants to buy neither the meat of the cruel Jews nor the terrorist Muslims,” Levy said sarcastically. As pressure mounts, “it will become more and more difficult in the kosher and halal industries.”

Albert Elbaz, a kosher meat shop owner from Aix-en-Provence, near the southern city of Marseille, calls this vision “alarmist.” Jews, he said, “will always eat kosher, and, thank God, we have enough Jews in France.”

But Jews make up less than 1 percent of France’s population of nearly 67 million, meaning that “in reality, the only thing protecting kosher slaughter is the electoral power of the far-larger Muslim population” of 5.7 million, said Levy.

Yet even that protection may be temporary due to the growing acceptance among French Muslims of post-cut stunning — a method in which animals are stunned as their throats are cut.

Post-cut stunning is shunned by most Orthodox certifiers of kosher meat, with the exception of a handful in Austria and the United States. But its acceptability is growing among Muslims, whose rules on ritual slaughter are not as strict as those of Orthodox Judaism.

“The Jewish community seems united in opposing pre-slaughter stunning, while the Muslim community is divided on the question whether stunning should be allowed before halal slaughter,” noted a team of researchers who in 2013 published a report on post-cut stunning.

Technical advances and the Muslim communities’ relative openness mean room for adapting halal slaughter “without compromising its deep and essential meaning,” they added.

That’s bad news for Levy and others in the kosher meat industry, he said.

“The minute the Muslims accept post-cut stunning,” Levy said, “the kosher meat industry is done for.”