Al Franken says he is returning to Senate despite feeling ashamed 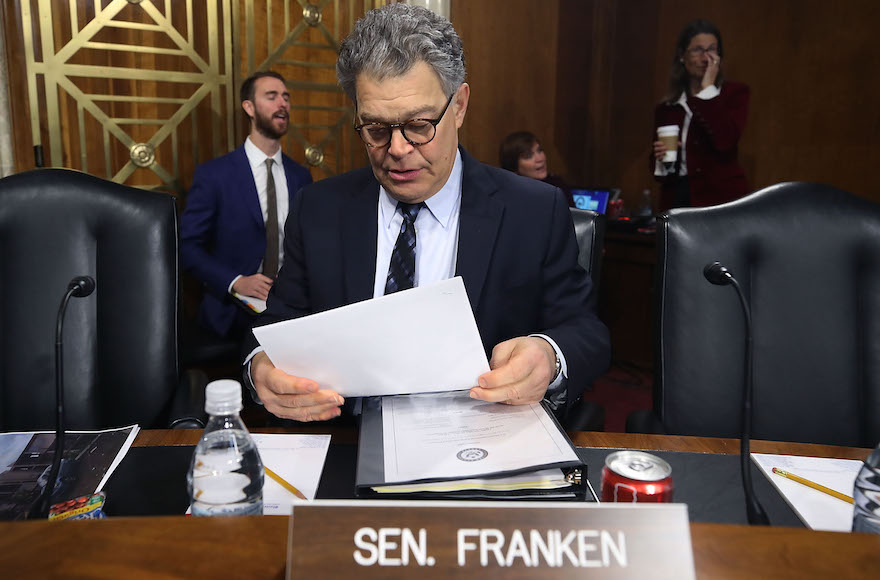 (JTA) — Sen. Al Franken of Minnesota told the local media he would not resign from the Senate, despite being ashamed of sexual harassment allegations against him.

Franken, a Democrat, said he would return to work in Washington on Monday after the weeklong Thanksgiving recess and pledged to fight the proposed Republican tax bill.

“The Ethics Committee is looking into all of this and I will cooperate fully with it. I know I have a lot of work to do to regain the trust of people I’ve let down.”

Franken has apologized to the women who have accused him. He told the local media that he wants to be a “better man.”

Last week, a 33-year-old woman, Lindsay Menz, accused Franken of grabbing her buttocks while they took a photo together at the Minnesota State Fair in 2010. In a statement to CNN, Franken said he did not remember taking the photo with Menz and that he felt “badly that Ms. Menz came away from our interaction feeling disrespected.”

Earlier, a Los Angeles-based news anchor and former model, Leann Tweeden, said that Franken groped her during a 2006 tour to entertain U.S. troops in the Middle East and forcibly kissed her. Franken was a comedian and a writer at the time; he has served as a senator since 2009. Franken apologized to Tweeden.

On Thursday, two other women accused Franken of touching their buttocks while taking photos during campaign events in Minneapolis in 2007 and 2008, the lawmaker’s first campaign for the Senate. Franken told the Minneapolis Star Tribune that he has posed for tens of thousands of photos over the years and does not remember intentionally touching women inappropriately while taking the photos.

He told the newspaper that has spent the past week “thinking about how that could happen and I just recognize that I need to be more careful and a lot more sensitive in these situations.”