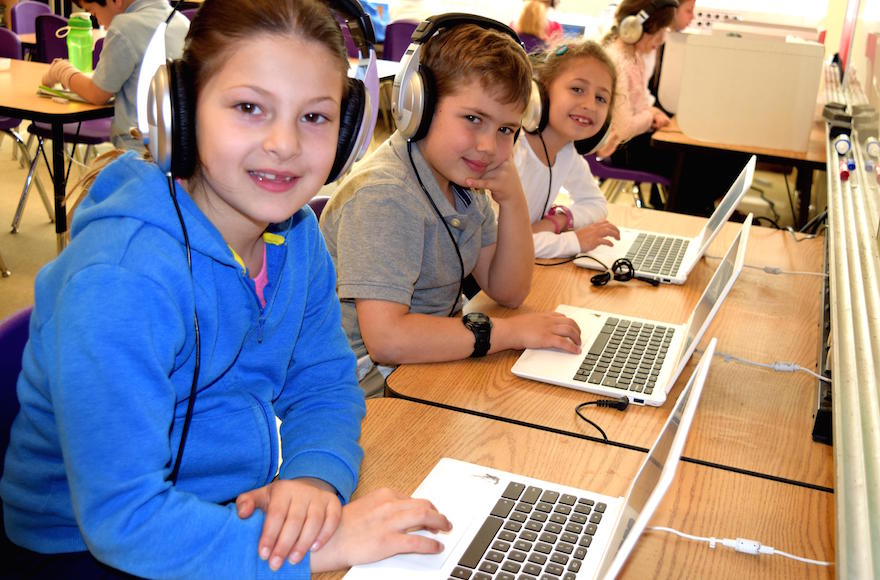 Annual tuition fees average about $16,000 nationally, and can exceed $35,000 at some Jewish high schools in New York and Los Angeles. While tuition has risen 3 to 6 percent annually over the past decade, according to agencies that service day schools, salaries largely have stayed flat.

But many communities are pioneering ways to help make day school more affordable. The push comes because of a persistent affordability problem that experts say has disproportionately affected those making $150,000 to $350,000 a year. While before the Great Recession of 2008-09 about 30 percent of such families needed financial aid, now about half do, the agencies say.

Aside from offering need-based scholarships on a case-by-case basis, Jewish day schools have developed creative methods of standardizing discounting. Many schools offer flexible or sliding-scale tuition, with fees for each student determined according to family income. The discounting is made up through a scholarship fund supported by wealthier families.

A few schools employ a tuition cap limiting the total amount parents pay for all their children to a fixed dollar amount or certain percentage of adjusted gross income, usually 15 to 18 percent. Among the schools that employ such caps are the Joseph Kushner Hebrew Academy and Rae Kushner Yeshiva High School Livingston, New Jersey, and the Hillel Academy of Pittsburgh.

Some schools offer early enrollment discounts, usually $100 to $500 off per child annually.

“Schools understand that if families can’t afford to pay, they will lose them or they won’t get them to begin with,” said Daniel Perla, senior director for financial vitality at Prizmah: Center for Jewish Day Schools, which works with schools across North America to promote educational excellence and financial stability.

Communal institutional assistance is a growing feature of the day school landscape, with federations, foundations and individual philanthropists providing matching grants, scholarships and endowment funds to schools in their area.

“There is no one model,” Perla said. “Every city has its own story.”

In Chicago, the $32 million Jewish Day School Guaranty Trust Fund of the Jewish United Fund/Jewish Federation of Metropolitan Chicago gave $377 this year to 17 federation-supported day schools for each enrolled student. That’s on top of a $3 million allocation supplied by the JUF to the schools from its annual campaign, said Jay Tcath, the federation’s executive vice president.

The Montreal Jewish federation’s Generations Fund has spearheaded an ambitious effort to underwrite both access and excellence for local day schools, providing tuition freezes and subsidies to families as well as aid to schools.

In New Jersey, the Gottesman family awarded a $10 million grant two years ago to cap tuition at all four day schools in the area served by the Jewish Federation of Greater MetroWest NJ.

Why are communal institutions providing this help?

A few schools say they have figured out how to deliver a high-quality Jewish education less expensively – by limiting the number of administrators, keeping facilities simple, and eliminating bells and whistles such as sports teams or lunches.

For example, Kinneret Day School, a 250-student, K-8 school in the Riverdale section of the Bronx, rents classroom and gym space from a large apartment complex. Parents pay extra for lunch and afterschool activities. The tuition is below $16,000 for grades 1-8, compared to nearly $24,000 at SAR, the other neighborhood day school. 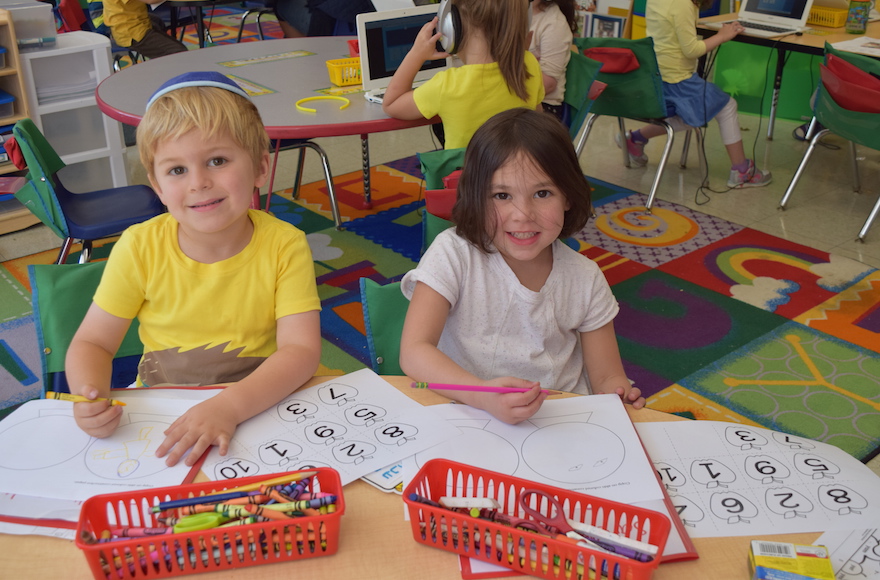 In blended-learning classrooms, students rotate between computer learning and teacher-led instruction, giving teachers both data about student progress and opportunities to interact with students in small groups. (Courtesy of Westchester Torah Academy)

Another putative “no frills” school, the Bader Hillel High School of Milwaukee, costs $14,000 per year, and many students are eligible for reduced tuition of $7,500 or less. Hillel keeps tuition low in part by using for its general studies courses eAchieve Academy, a city-based, public school online platform supervised by teachers.

Online and blended learning – the use of computer-aided instruction to individualize learning or augment course offerings – began as a movement to use technology to improve student achievement. A variety of Jewish day schools now are using it to try to minimize costs without sacrificing quality.

Two elementary schools started over the past decade, Westchester Torah Academy in New Rochelle, New York, and Yeshivat He’atid in Teaneck, New Jersey, keep tuition below $11,000 by using interactive computer programs to customize lesson plans for each student. Such instruction, which gives teachers daily reports about students’ progress, can save money by eliminating the need for costly “resource rooms” to help students, school officials say.

The schools are part of a cohort of four young schools, including Milwaukee Bader Hillel and the Harkham-GAON Academy high school in Los Angeles (tuition: $15,000), that receives support from the Avi Chai Foundation for using online or blended learning.

“We are really investing in these schools to see if they are sustainable,” said Rachel Abrahams, the senior program officer at Avi Chai. “At the elementary school level, parents are willing to try new models. It’s harder at the high school level.”

Plenty of traditional schools are experimenting with online learning, too. Three online Judaic studies providers supported by Avi Chai — the Lookstein Virtual Jewish Academy, the Online Judaic Studies Consortium and YU CollegeNow – have supplied courses to 116 schools and served 1,616 students. Other online Judaic software, such as iTaLAM and Bishvil Ha-Ivrit, collectively reach 16,500 students at 150 schools in North America, according to Avi Chai.

Day schools across the religious denominations have banded together in recent years to lobby for increased government funding for everything from state-mandated attendance taking to security, and day schools nationwide now get hundreds of millions in government funding.

In just the states of New York, New Jersey, Pennsylvania, Florida, Maryland and California, advocacy efforts have yielded $500 million for day schools, according to Maury Litwack, state director of political affairs for the Orthodox Union, which in 2013 launched the Teach Advocacy Network to lobby for those dollars.

Among the notable gains:

* New Jersey increased per-student funding to $37 for technology, $95 for nursing aid and $75 for security.

* Pennsylvania, like several other states, offers taxpayers a tax credit for donating to scholarship funds like the Foundation for Jewish Day Schools. Those donations help students from eligible lower-income households. Overall, 40 percent of Jewish day school students in Pennsylvania receive educational scholarships funded by these credits.

Ultimately, say those working to support Jewish day schools, reducing the financial burden of tuition is a Jewish imperative.

“Easing the financial burden of those choosing a Jewish day school education,” said JUF’s Tcath, “is a priority for our federation and the best long-term investment we can make for an educated Jewish future.”