Mike Pence: Trump mulling ‘when and how’ to make embassy move 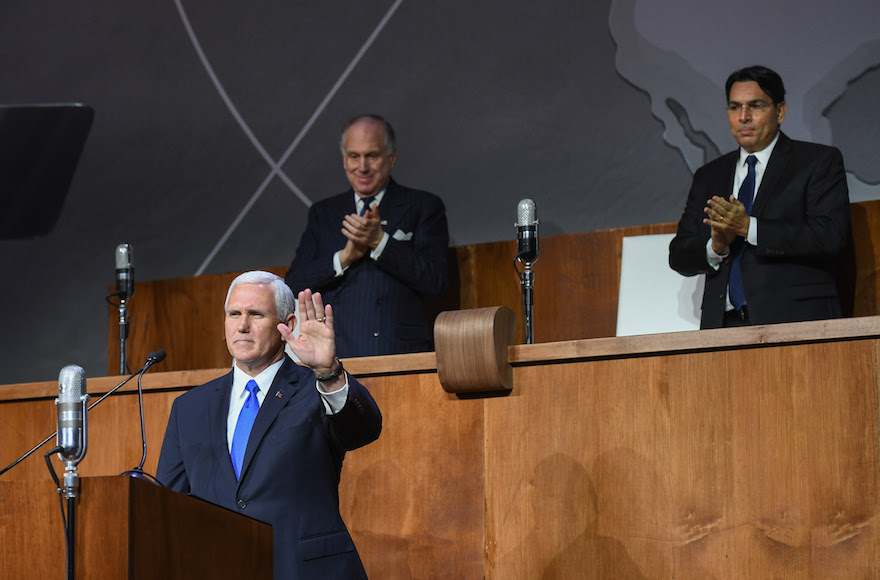 WASHINGTON (JTA) — President Donald Trump continues to consider “when and how” to move the U.S. Embassy to Jerusalem, Vice President Mike Pence said.

“President Donald Trump is actively considering when and how to move the American embassy in Israel from Tel Aviv to Jerusalem,” Pence said Tuesday at an event in New York organized by the Israeli mission to the United Nations in partnership with the World Jewish Congress marking the 70th anniversary of the U.N. General Assembly vote to recognize Israel on Nov. 29, 1947.

Pence’s pledge comes days before the Dec. 1 deadline for Trump to decide whether to waive a 1995 law mandating moving the embassy to Jerusalem. Every president since the law was passed, including Trump, has exercised the national security waiver, an action that must be taken every six months.

Pence referred also to Trump’s decision to attempt redefining the terms of the Iran nuclear deal, which swaps sanctions relief for a rollback in Iran’s nuclear program.

“We will no longer tolerate Iran’s support for terrorism across the region and across the entire world,” he said. Under Trump, the vice president said, “the United States of America will not allow Iran to develop a nuclear weapon.”

President Barack Obama similarly pledged to keep Iran from developing a nuclear weapon on his watch and argued that the deal was the best means to do so. Obama’s envoys to the United Nations also worked closely with their Israeli counterparts to push back against anti-Israel initiatives.