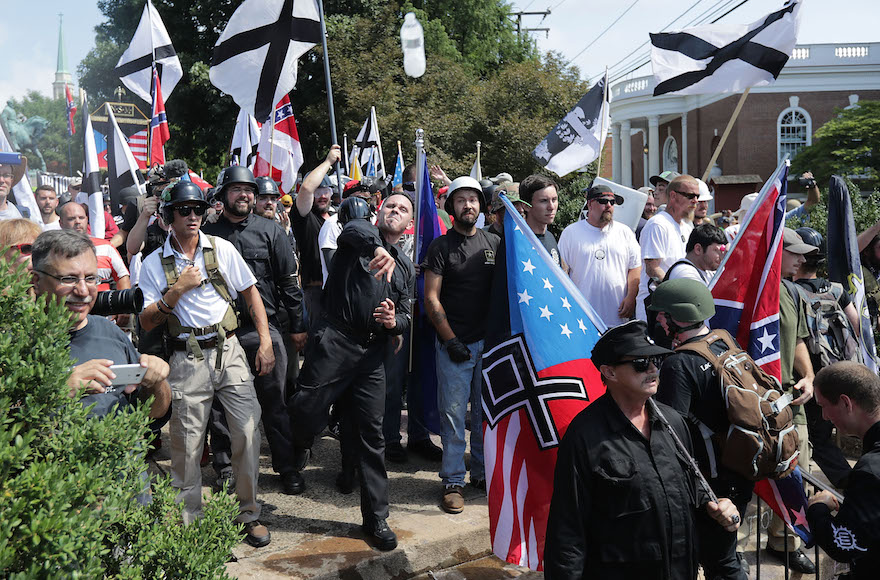 WASHINGTON (JTA) — The U.S. Jewish community is more secure than it was a decade ago but must brace for new challenges, according to the officials who oversee communal security.

These include lone wolves weaponizing easy-to-access items like cars; increasingly disruptive protests on campuses; the persistence of attackers inspired by radical Islamism; and the boldness of the extreme right wing in the wake of the electoral successes of its perceived allies.

Next week, a new person will be in charge of running the network that oversees the community’s security needs.

Michael Masters takes over as head of the Secure Community Network, which is affiliated with the Jewish Federations of North America and the Conference of Presidents of Major American Jewish Organizations.

“Events such as those in Charlottesville – with people carrying tiki torches and shouting ‘Jews will not replace us,’ conjuring images reminiscent of both Nazi torchlight parades and Ku Klux Klan ceremonies – to the use of social media to spread anti-Semitic theories and harass Jewish individuals and organizations, do present new challenges with respect to the security of the Jewish community,” Masters said.

The Aug. 12 march by far-right groups in the Virginia city turned deadly when an alleged white supremacist rammed his car into a crowd of counterprotesters, killing one and injuring at least 20.

“The ideology that is behind many of the events and actions we see – whether a rally in a town square, a speech at a university hall or through a podcast – can not only inspire an individual or group of people to action, but as we saw with the tragic events in Charlottesville, can provide an actual opportunity to act,” Masters said.

His reflections on challenges to the Jewish community’s security — and those by others — come at a moment of transition, when Masters takes over at SCN for the retiring Paul Goldenberg. In 2004, Goldenberg set up the SCN as a national security consultancy for Jewish communities.

Masters, who has been a senior adviser to SCN, credits Goldenberg with designing an information network that links Jewish communities to local and federal law enforcement and keeps them alert to pending threats. 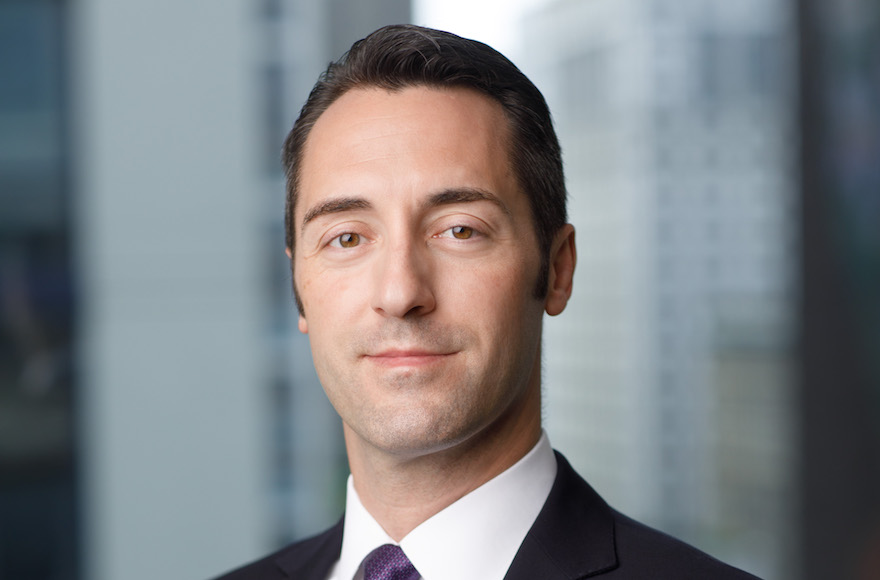 Both men rose through the ranks of police — Goldenberg in New Jersey and Florida, and Masters in Chicago and Cook County, Illinois — and said in separate interviews that a critical component of improved security was liaising with local law enforcement.

That cooperation has been key to the successful transition from a community that until 15 years ago tended to plan security after the fact, said Abraham Foxman, the former national director of the Anti-Defamation League.

“I remember the days when the FBI used to come in [after a threat or an attack] and say ‘where are the synagogues, where are the institutions?'” recalled Foxman, whose organization prior to SCN’s establishment was the principal clearinghouse for Jewish security issues and still trains law enforcement in identifying threats. “There’s a lot more law enforcement involvement now.”

SCN has encouraged communities to share blueprints of their facilities with local law enforcement for quicker, more efficient action in case of an attack.

Goldenberg spent 13 years on the move consulting with communities in the United States and Europe that had been threatened or attacked. (“This is a job for people who like to fly,” Masters said.) In addition to establishing relations with law enforcement, some of the “best practices” Goldenberg encouraged included hardening sites with barriers and other equipment, training staff to be alert to threats, hiring security guards with adequate experience and who are sensitive to the Jewish community, and setting up volunteer teams to help secure institutions.

John Farmer, a former New Jersey attorney general who leads a Rutgers University team that focuses on police-community relations in crisis areas, said Jewish communities were more secure than they were a decade ago, but faced more unpredictable threats.

“The community is much better prepared than a decade ago for well-coordinated and -planned attacks that are easier to detect in advance,” said Farmer, who was senior counsel to the 9/11 Commission. “But it is more vulnerable to the lone wolf, the attacker inspired by ideology he encounters online, so the attacks can be much more random and harder to detect.”

Masters charted the evolution of the deadly car-ramming attack as an example of an emergent and unpredictable threat.

“Several years ago we started seeing in some of the literature from the so-called Islamic State and al-Qaida, written in English, instructing would-be attackers in how to use readily accessible items, in knife attacks, vehicle attacks,” he said. “We saw those first done in Israel and Tel Aviv, and then we saw that in Nice and Germany, and then more complex versions of those attacks in London, and then we’ve seen them unfortunately in the United States, in New York City, just in the last few weeks.” 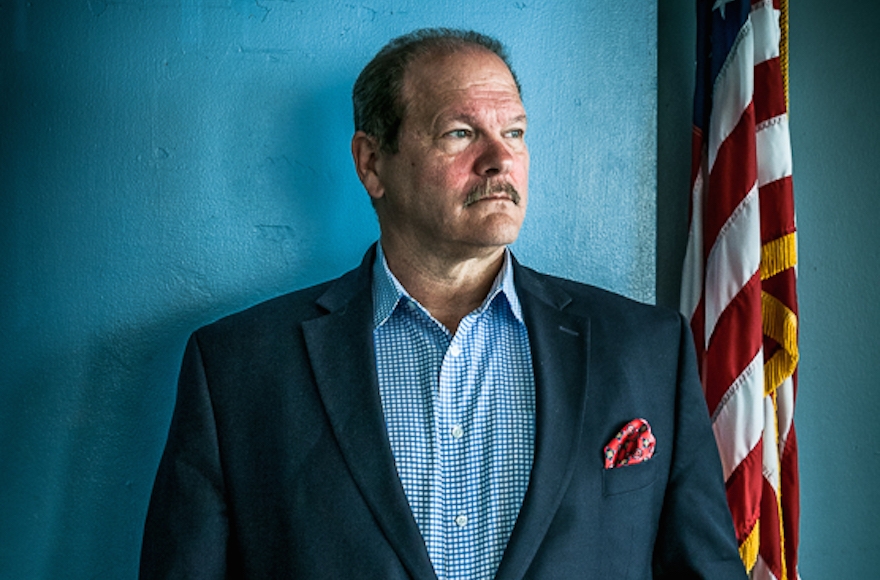 Paul Goldenberg ran the Secure Community Network for over a decade. (Courtesy of Goldenberg)

Masters identified another threat: disruptions on campus by pro-Palestinian groups that were inhibiting pro-Israel activities. He cited a 2016 example at the University of California, Irvine, where protesters kept pro-Israel students from leaving the screening of a movie. SCN has launched a security initiative for Jews on campus in cooperation with the Jewish Federations of North America, Hillel International, Chabad and AEPi, the Jewish fraternity, Masters said.

Farmer said the threats were coming from the left and the right.

“You have the emergence of Islamist extremism and a resurgent threat from right-wing extremist groups with a racist nationalism,” he said, noting the electoral successes by the far right in Europe as a contributing factor.

Foxman said the re-emergence of the threat from the far right was “serious but not critical,” arguing that the spike in anti-Semitic incidents over the past year as chronicled by the ADL was substantive but not indicative of a crisis.

The ADL earlier this month recorded a 67 percent rise in anti-Semitic incidents in the first nine months of this year, factoring in a string of bomb threats largely attributed to a Jewish man in Israel. Absent those bomb threats, the spike was 46 percent. Separately, an FBI report released this month showed a 16 percent increase in the number of anti-Semitic hate crime offenses, to 834 in 2016 from 695 the previous year.

Foxman said the right-wing extremists were emboldened by public figures, including President Donald Trump, who stripped away old taboos in implicitly and sometimes explicitly targeting minorities for attack, as well as by the reach that individuals now have with the advent of social media.

He described a vicious circle.

“There’s a greater chutzpah in the atmosphere from the president on down,” Foxman said. “Taboos have been broken, including taboos against the Jewish community. The media pay more attention today to acts of anti-Semitism, and the internet raises interest, and that contributes to the chutzpah.”

Trump, he said, had a positive role to play if he so chose.

“He has a bully pulpit,” Foxman said. “The challenge is to let them understand it’s not moral, it’s not Christian.”

Charlottesville was less surprising for the numbers of extremists present — about 500 — then it was for their boldness, he said.

“They had a sense they could flaunt their anti-Semitism,” the former ADL chief said.

The key, Foxman said, was not to give anti-Semites a win by overreacting.

Goldenberg agreed, saying that he saw his legacy as keeping American Jewish communities from going into the lock-and-key mode of some European communities. American Jews still frequented Jewish institutions without fear, he said.

“If those who undertake attacks on our community believe that they will not be able to create mass chaos and fear, and a subsequent unraveling of our values and worldviews as a community, it removes a major cause for their activity,” he said.

Goldenberg will continue to consult with SCN and stay on as a member of the Department of Homeland Security Advisory Council, an appointment he was given in part because of his leadership position in the Jewish community. He is also a member of Farmer’s Rutgers team.

Masters, unlike Goldenberg, who was a New Jersey-based contractor, will be directly employed by the JFNA and work out of its New York office.