Jared Kushner talks about his peace plan, and leaves everyone guessing 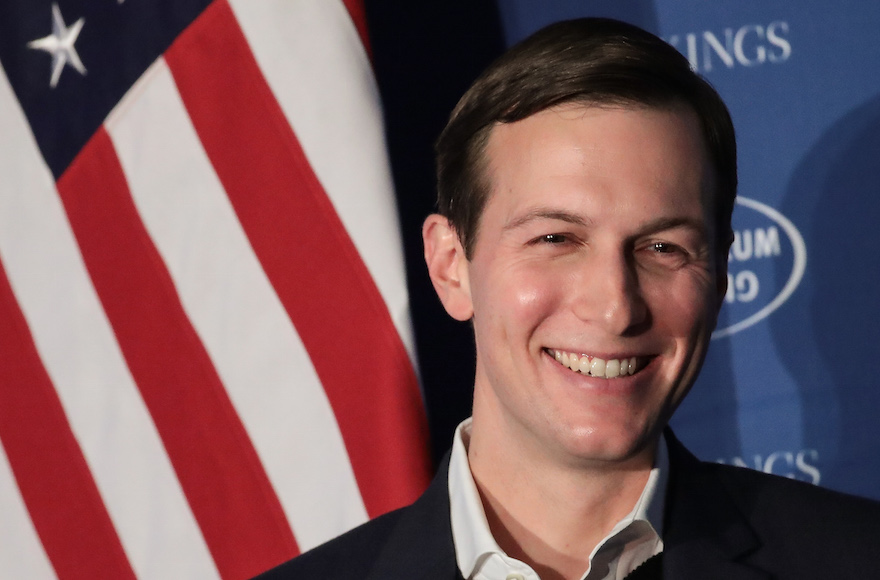 WASHINGTON (JTA) — The peace deal between Israel and the Palestinians will be comprehensive and pave the way for stability in the region.

That’s about all we know concerning Jared Kushner’s plan, and he’s happy to keep it that way, President Donald Trump’s son-in-law and senior policy adviser said this weekend at a gathering of scholars and policy mavens who deal with the U.S.-Israel relationship.

“The best thing about the team is that there’s a lot of trust within the team,” Kushner said at the Saban Forum, speaking with Haim Saban, the Israeli American entertainment mogul who is the main benefactor of an event organized by the Brookings Institution. “The fact that we’re so close there’s been no leaks on the process to date has enabled a lot of the sides we work with to be able to work with us in a more open format than they would.”

Veteran peace negotiators are giving the Kushner team — the others are Jason Greenblatt, Trump’s top negotiator; David Friedman, the ambassador to Israel; and Dina Powell, a senior adviser on the National Security Council — high marks for keeping the plan close to their vests.

“I’m stunned by the degree with which this administration has managed to pose a degree of discipline on this process,” said Aaron David Miller, a veteran of peacemaking under Republican and Democratic presidents who is now vice president of the Wilson Center foreign policy think tank.

“Either there’s nothing there or there’s something worth protecting,” Miller said.

So which is it? The team’s discipline notwithstanding, it’s possible to glean some information from the recent events.

The New York Times reported Monday that the Saudi crown prince, Mohammed bin Sultan, had summoned Palestinian Authority President Mahmoud Abbas two weeks ago and presented him with the outline of a final status solution that included a Palestinian state with limited sovereignty, patches of non-contiguous territory in the West Bank, no stake in Jerusalem and most Israeli settlements remaining in place.

That’s not a solution the Palestinians will abide, said Miller.

“It’s more like a script from a Marx Brothers movie rather than a serious proposal,” he said.

The Times said the Palestinians were deeply unhappy with the proposal, and accepting the plan would mean the likely ruination of the Palestinian Authority. Miller said a proposal seen as killing off the idea of a viable Palestinian state would make the United States “look really bad.”

How the United States looks internationally, however, has been perhaps the least of the concerns of Trump, who thumbs his nose at allies on a daily basis. Trump said at the outset of his presidency that he is not married to the idea of two states. Kushner did not mention two states in his remarks on Sunday, and Israeli and Palestinian officials who have interacted with Kushner and his team have said that “two states” never comes up in private conversations.

That doesn’t mean it’s off the table: Greenblatt, in encouraging the Palestinian Authority to ease out Hamas, which controls the Gaza Strip, has said that any Palestinian government must abide by “previous agreements.” Those include the 2003 Road Map brokered by the George W. Bush administration, which explicitly envisions a two-state solution.

Ori Nir, the spokesman for Americans for Peace Now, a pro-Israel group that favors the two-state solution, praised Kushner’s team for staying mum, but said it didn’t make sense not to be explicit that two states was the outcome.

“There has to be a political horizon and, at the moment, there isn’t one,” he said.

Are the Palestinians in the loop?

The leaks to The Times, from Palestinian sources, suggest that the Palestinians are scrambling to figure out what happens next. In August, Husam Zomlot, the Palestine Liberation Organization envoy to Washington, said, “We need them to tell us where the hell they are going.”

The Palestinians have been knocked for a loop by reports that Trump plans to recognize Jerusalem as Israel’s capital as early as this week; the Trump administration will back a congressional bill, the Taylor Force Act, to cut funding to the Palestinians as long as the Palestinian Authority continues to subsidize the families of Palestinians who have killed Israelis; and by new strictures on the PLO office.

Shoshana Bryen, a Middle East specialist at the conservative Jewish Policy Center, said the Palestinians were posturing. She said the Trump administration was likely relaying a message to the Palestinians that they had to give in order to get.

“The Taylor Force Act, the PLO mission, the Jerusalem embassy, if it happens,” she said. “The thread running through these is you have to pay something.”

That something, she said, would be full-fledged recognition of Israel as a permanent part of the region — removing any ambiguity suggesting that Palestinians believe Israel will one day disappear.

“If Israel gets that, everything else is negotiable,” she said. 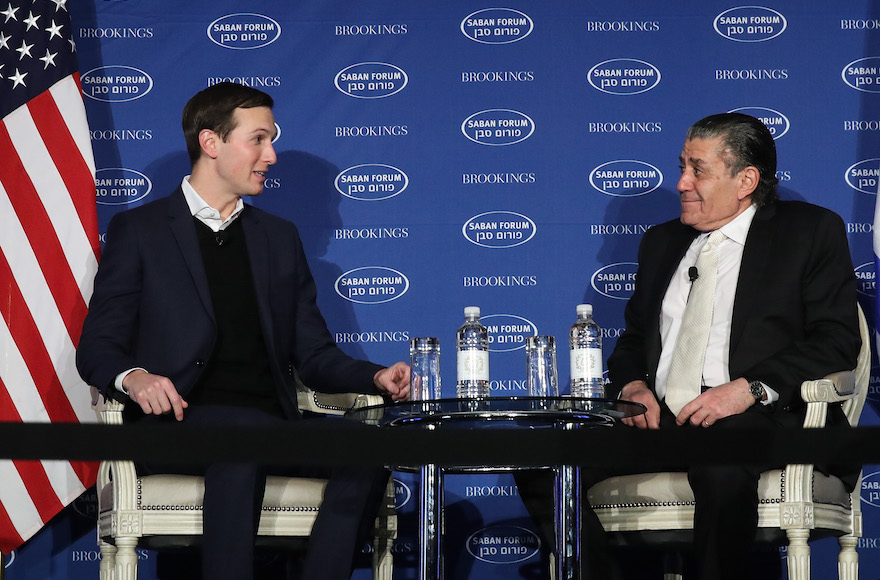 Are the Israelis in the loop?

If Israeli Prime Minister Benjamin Netanyahu is concerned about Kushner’s plan, he isn’t showing it. Kushner and his family have been close to Netanyahu for years, and Netanyahu has been effusive about his closeness to Trump.

On Monday, Politico ran an extensive and rare interview with Ron Dermer, Israel’s ambassador to the United States and one of Netanyahu’s most trusted advisers. He sounded confident of his government’s closeness to the Trump administration, a sharp contrast with the fraught relations Netanyahu had with Trump’s predecessor, Barack Obama.

“I think the way this administration has gone about this, very quietly … I think it’s a sign of great seriousness,” Dermer said.

Miller said Netanyahu may have good reason to be pleased.

“I have to assume that due to Mr. Netanyahu’s relaxed reaction, he is aware of what’s in this thing,” he said.

Nonetheless, the only news Kushner made at the forum is that he is hewing to time-honored conventions of Middle East peacemaking: solve Israel-Palestinians first, and everything will fall into place; score the big overarching peace deal, and the troublesome issues that have shattered peace talks in the past will take care of themselves.

“If we’re going to try and create more stability in the region as a whole, you have to solve [the Israeli-Palestinian] issue,” he said.

“That to me was jarring,” Bryen said.

Jerusalem? Wednesday. Or not.

There has been a slew of reports that on Wednesday, Trump will in some capacity recognize Jerusalem as Israel’s capital. How that will be expressed is not clear: Trump failed to meet a deadline of Dec. 1 to waive the 1995 law that mandates moving the U.S. Embassy to Jerusalem from Tel Aviv.

Trump can still waive the law — a Republican Congress is unlikely to challenge him for being late by a few days. But will he recognize all of Jerusalem as the capital? Or just its western sector? Will he move the embassy? Will there be a quid pro quo for the Palestinians?

Or will anything at all happen on Wednesday? Trump is famous — or notorious — for changing his mind at the last moment. He pledged during the campaign to move the embassy; he reneged in his first weeks as president, saying he was still considering the matter.

On Monday, all a White House official would say was “The president has always said it is a matter of when, not if. The president is still considering options and we have nothing to announce.”