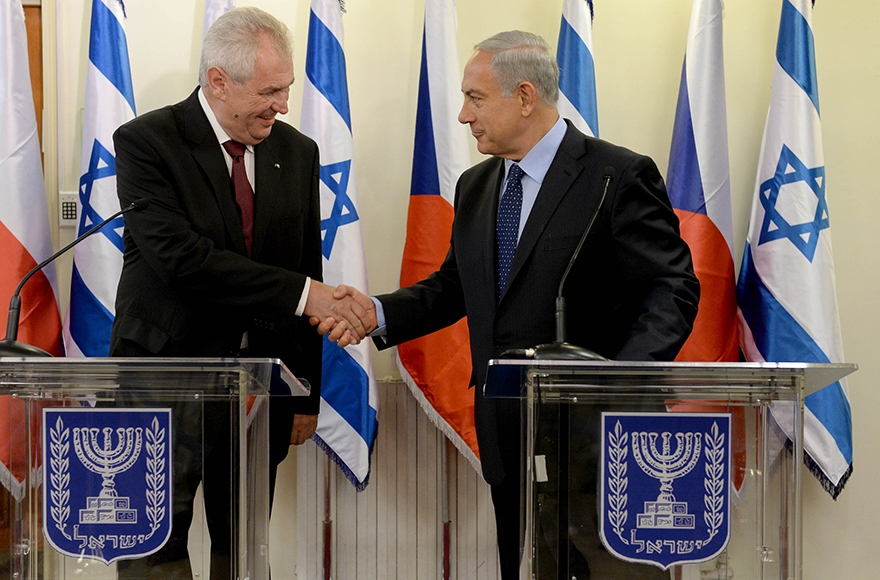 “Now we may sooner or later follow the United States,” Zeman said during a television appearance Thursday, adding: “In any case, it is still better than nothing.”

Zeman, whose signature is necessary to validate laws and who may veto laws passed by parliament, also said, “It makes me truly happy because, as I said during my visit to Israel four years ago, I would appreciate the transfer of the Czech Embassy to Jerusalem, and had it happened, we would have been the first to do so.”

But Zeman, who cannot dictate his country’s foreign policy, did not say that it would move its embassy to Jerusalem, as President Donald Trump said Wednesday during his declaration on Jerusalem, after which he signed a document that for the first time recognizes the city as Israel’s capital.

Hungary is also considering breaking rank with the European Union and recognizing Jerusalem as Israel’s capital, the EUObserver news site reported Thursday, adding that Budapest had blocked an EU statement on Wednesday that was to have voiced “serious concern” over the American position on Jerusalem.

On Wednesday, the Czech Foreign Ministry issued a statement saying it would neither move the embassy from the Tel Aviv area to Jerusalem nor recognize the latter as Israel’s capital prior to the reaching of an agreement on its status in peace talks between the Israelis and Palestinians.

“The Czech Republic currently, before the peace between Israel and Palestine is signed, recognizes Jerusalem to be in fact the capital of Israel in the borders of the demarcation line from 1967,” the Foreign Ministry said in the statement.

However, the ministry noted that “the Czech Republic together with other EU member states, following the EU Foreign Affairs Council Conclusions, considers Jerusalem to be the future capital of both states, meaning the State of Israel and the future State of Palestine. The Ministry can start considering moving of the Czech embassy from Tel Aviv to Jerusalem only based on results of negotiations with key partners in the region and in the world.”

The European Union, of which the Czech Republic is a member, has criticized Trump’s recognition of Jerusalem as “counterproductive.”