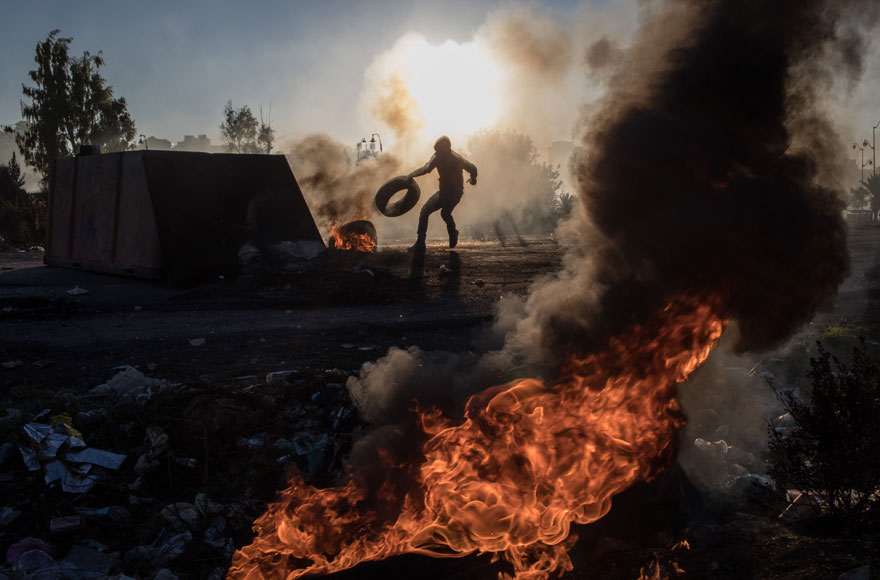 A Palestinian protester pushes a tire onto a fire barricade as they clashed with Israeli border guards near an Israeli checkpoint in Ramallah, West Bank on Dec. 8, 2017. (Chris McGrath/Getty Images)
Advertisement

(JTA) — A Palestinian man was killed and hundreds were wounded in the West Bank and Gaza Strip as Palestinians protesting the Trump administration’s recognition of Jerusalem as Israel’s capital clashed with Israeli troops.

The fatality, a man in his 30s, was shot dead during protests by thousands of Palestinians near the fence that separates Gaza from Israel, Army Radio reported, citing statement by the Health Ministry of the Hamas-run Gaza Strip.

Some 300 people were wounded in riots that broke out across the West Bank, including Hebron and the Ramallah area, on Thursday and Friday following President Donald Trump’s declaration Wednesday that the United States recognizes Jerusalem as Israel’s capital and will begin preparations to move its embassy there from Tel Aviv.

In Amman, Jordan and Istanbul, Turkey, tens of thousands of people held protest rallies in front of the U.S. embassies. Similar events were held in Indonesia, Malaysia and Pakistan, CNN reported. In Tehran, Iran, thousands of participants attended a government-sponsored rally.

At the Temple Mount in Jerusalem, which houses the Al-Aqsa mosque, thousands participated in an unauthorized protest that featured calls about killing Jews after Friday prayers.

“Jews, remember Khaybar, the army of Muhammad is returning,” many of the men present shouted. The cry relates to an event in the seventh century, when Muslims massacred and expelled Jews from the town of Khaybar, which is located in modern-day Saudi Arabia.

Also Friday, the same shout was heard at an event in Vienna, Austria, which the local branch of the BDS movement, an acronym for the Boycott, Sanctions and Divestment movement targeting Israel, helped organize and advertised on its Facebook page, including with footage of the shouts.

In Paris, the local Antifa far-left group said that CRIF, the umbrella group of French Jewish communities, “is asking President Emmanuel Macron to also recognize Jerusalem as Israel’s capital,” inviting readers of its statement to “strike a blow against the imperialist West from within the belly of the beast.” It was an invitation to a demonstration at Republique square on Saturday “against the colonization of Jerusalem.”

The invitation ended with the words “Al Quds belongs to the Palestinians, Palestine stretches from the sea to the Jordan River.” Al Quds is the Arabic-language name that many Arabs use to refer to Jerusalem, and the latter reference refers to Israel’s western maritime border, the Mediterranean Sea, and its eastern one.

Macron has said that France “does not approve” of Trump’s policy on Jerusalem.

In 2014, dozens of Arab men besieged 150 congregants at a Paris synagogue during a wave of riots over Israel’s strikes in Gaza against Hamas.