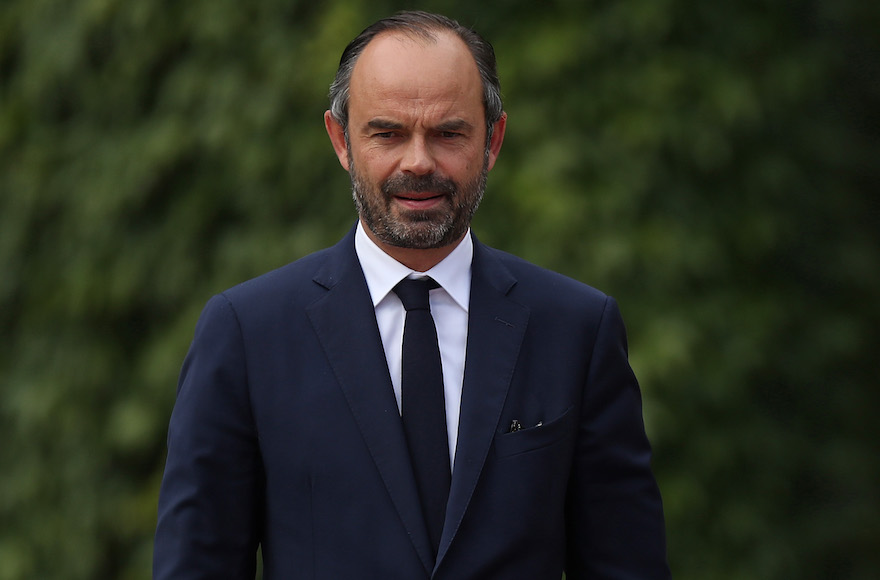 PARIS (JTA) — Amid attacks in Europe on Jews following the United States’ recognition of Jerusalem as Israel’s capital, French Prime Minister Edouard Philippe condemned anti-Semitism “that always tries to justify itself with new pretext,” and which he said has deep roots in France.

Philippe’s remarks, which were unusual for his acknowledgment of the phenomenon’s depth in his country, came Sunday during a speech before approximately 700 participants in the eight annual conference of the CRIF umbrella group of French Jewish communities.

“In our country, anti-Semitism is alive. It is not new, it is ancient. It is not superficial, it is well-rooted and it is alive. And it hides always behind new masks, attempts to justify itself through diverse reasons. This ideology of hate is here, it’s present and it’s making some French Jews to make aliyah,” Philippe said, using the Hebrew word for immigration by Jews to Israel. “It should be a spiritual choice but it pains all citizens of the republic when it’s a form of self exile, made out of insecurity and fear.”

Following President Donald Trump’s declaration Wednesday on Jerusalem, a kosher restaurant was attacked in the Netherlands by a Palestinian waving his national flag, and 20 men hurled firebombs at a synagogue in Gothenburg, Sweden. In Paris and Lyon, protesters against the declaration promoted a boycott of Israel, which is illegal in France, and cheered and called for freedom for Palestinians convicted of murder charges who are in Israeli prisons.

Philippe also reported that anti-Semitic attacks in France had dropped by 20 percent this year over 2016, with a total of 216 incidents between January and October of 2017. On Trump’s recognition, which France opposes, Philippe said: “No one can deny the attachment of the Jewish people to Jerusalem.” But, he added, peace between Israel and the Palestinians must be “negotiated on the basis of international laws,” and this makes France “worried about unilateral decisions of any country.”

Paris Mayor Anne Hidalgo said during her address at the CRIF event that “anti-Semitism, which cloaks itself as anti-Zionism, must never be allowed to succeed.” She said her city opposes the Boycott, Divestment and Sanctions movement against Israel, whose promotion is illegal in France and is considered incitement to discrimination or racial hate.

Separately on Sunday, Israeli Prime Minister Benjamin Netanyahu was wrapping up a state visit to France, during which he met with President Emanuel Macron.

Macron urged Netanyahu during a joint press conference to “show courage” and make “gestures encouraging peace” toward the Palestinians. He suggested Israel freeze construction in the West Bank and eastern Jerusalem.

Netanyahu said that “the most important thing about peace is to recognize that the other side has the right to exist. I think that is what is holding up the peace between Israel and the Palestinians.” Netanyahu repeated an invitation to Mahmoud Abbas, the president of the Palestinian Authority, to peace talks.

Before leaving Saturday for Paris and Brussels, where Netanyahu is scheduled to meet with EU leaders Monday, the Israeli prime minister made a defiant statement about Israel-EU relations, whose latest tensions were over the European Union’s condemnation of President Donald Trump’s declaration Wednesday that Jerusalem is Israel’s capital. Macron said the status of Jerusalem should be determined only after peace talks between Israel and the Palestinians.

“While I respect Europe, I am not prepared to accept a double standard from it,” Netanyahu said in a statement before leaving.

“Jerusalem has been for the past 3,000 years the spiritual capital of the Jewish people. Jews all over the world form four corners of world have kept Jerusalem at the heart of their prayers,” he said. “France did not wait till the conflict is resolved before it opened its consulate in east Jerusalem, to represent France vis-a-vis the Palestinian Authority.”